Sometimes called the “sailing capital of the world,” the Virgin Islands is well established as a destination for travellers who want to be on the water. And in recent years, …

END_OF_DOCUMENT_TOKEN_TO_BE_REPLACED 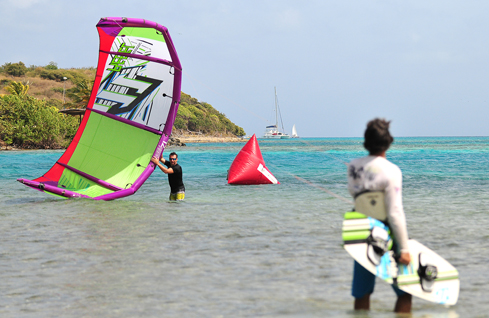 Sometimes called the “sailing capital of the world,” the Virgin Islands is well established as a destination for travellers who want to be on the water. And in recent years, the territory has started catering to a different sort of traveller as well: those who want the wind to fill up their sails and set them flying over the water.

For professional kiteboarder Charlie Smith, the same factors that make the VI a sailor’s paradise make it a “utopia” for kiteboarding.

“The wind is consistent, the temperature is great and we’ve got flat water,” Mr. Smith said.

Kiteboarding, or kitesurfing — which is sometimes described as a combination of wakeboarding, paragliding and gymnastics — is a sport in which the kiteboarder uses 80-foot lines to control a large sail and manoeuvre across the water and through the air, often at high speed.

The record kiteboarding speed is just over 50 knots, but many don’t feel the need to be quite so extreme. In fact, Mr. Smith, owner of Fusion BVI, which specialises in kiteboarding lessons, said the sport is quite safe.

“Especially compared to other windsports, or even snorkelling, you tend to get less of the minor bumps and bruises kiteboarding,” he said.