Fun in a flash

Two young children scrambled up to the white table, waiting their turn to play dress-up. Once they had decked themselves with pink feather boas, oversized sunglasses, Mardi Gras beads and …

END_OF_DOCUMENT_TOKEN_TO_BE_REPLACED 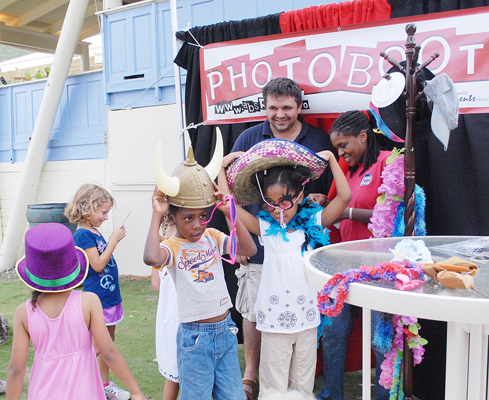 Kids try on costumes in front of Anya Brewley Schultheiss’ photo booth, which was temporarily set up at Nanny Cay on Friday afternoon. Photo: Jason Smith

Two young children scrambled up to the white table, waiting their turn to play dress-up. Once they had decked themselves with pink feather boas, oversized sunglasses, Mardi Gras beads and large curly wigs that were way too big for their heads, they were ready for their photo shoot.

They ducked into the temporary photo booth set up behind Peg Leg’s restaurant at Nanny Cay on Friday and pressed the touch-screen display inside. A camera automatically took their photo, and a printer spat out a strip of three wallet-sized images about 15 seconds later.

Anya Brewley Schultheiss, the owner of ABS Photobooth, and her husband Jamie Schultheiss stood nearby helping the children try on the costumes and collecting the entry fee for the booth: $10 for six photos.