The past and the present came together during a night of cultural entertainment when this year’s BVI Fungi Fest was held as part of the August Emancipation Festival activities. “The …

END_OF_DOCUMENT_TOKEN_TO_BE_REPLACED 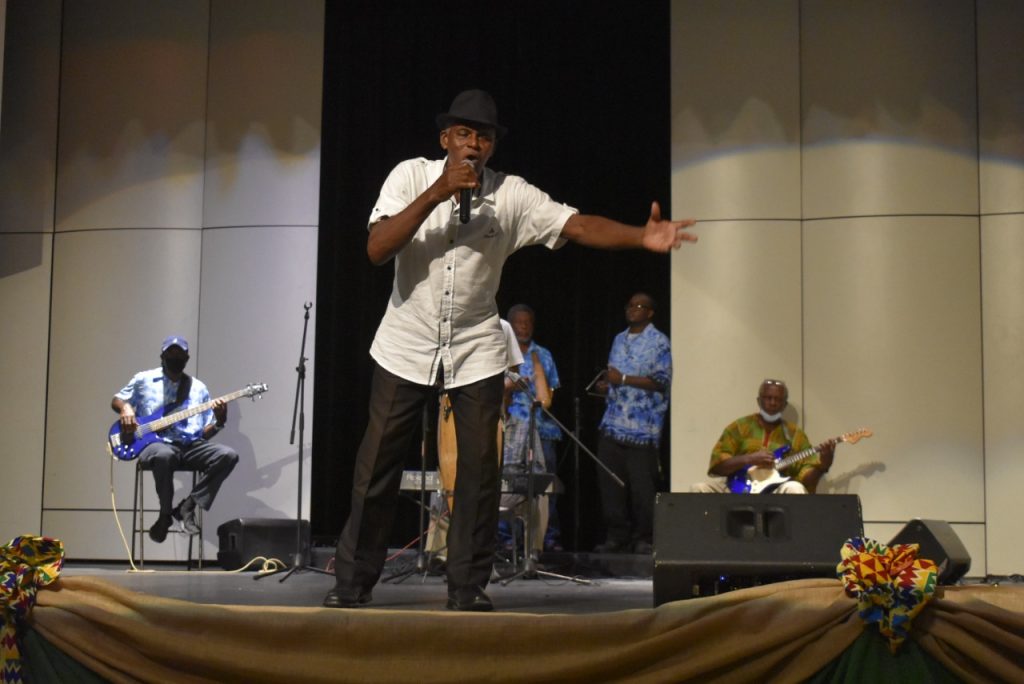 The past and the present came together during a night of cultural entertainment when this year’s BVI Fungi Fest was held as part of the August Emancipation Festival activities.

“The music known as fungi music is said to have traveled with our ancestors from Africa and has evolved into what it is today,” Bernadine Louis said as she welcomed the audience to the July 30 show in the Eileene L. Parsons Auditorium at H. Lavity Stoutt Community College.

The event showcased musical performances by Elmore Stoutt & Zion Sounds, the Razor Bladez, and DC Four Strong — all of which were accompanied by VI saxophonist Kamau Georges.

The line-up also included song and storytelling by Rosie Smith and dancing by the BVI Heritage Dancers.

Ms. Louis, the director of the VI Studies Institute at HLSCC, reminded attendees that fungi is the territory’s official music.

“The music is a combination of many different types of instruments that produce a sweet, pulsating sound,” she said. “Many of the instruments were made from things like sardine tins, pumpkin vines, papaya stems.”
Between performances, Mr. Stoutt noted the music’s versatility.

“That’s the thing about fungi: You can mix it up any place,” he said when he was joined on stage by Mr. Georges.

The Heritage Dancers took the stage twice, performing a polka and a two-step. The group has performed on a float in the August Monday Parade for 25 years, and members serve as government ambassadors through the BVI Tourist Board, Ms. Hodge said.

The dance group’s founder — former legislator Eileene Parsons — was one of three people honoured at the event in tributes read by emcee Debra Hodge, HLSCC’s director of student affairs.

“Mrs. Parsons played and continues to play a vital role in the promotion of culture and the performing arts in this territory,” Ms. Hodge said.
Besides her contributions to culture, Ms. Parsons was the first woman to hold a ministerial post in the VI government, Ms. Hodge added.

“For more than 50 years, he has been involved in the advancement of young people,” Ms. Hodge said.

Outside of his teaching career — which included a stint as principal of the high school that now bears his name — Mr. Stoutt has been “a major player in the preservation of Virgin Islands culture through music and storytelling,” she added.

The third honouree was Janice Stoutt, who has “given of her time and energy in helping to promote Virgin Islands culture through poetry, short stories and drama,” according to Ms. Hodge.