Gambling is now officially legal in the Virgin Islands, but it may not be as tightly controlled as legislators previously claimed. When Premier Andrew Fahie introduced the controversial gambling bill …

END_OF_DOCUMENT_TOKEN_TO_BE_REPLACED 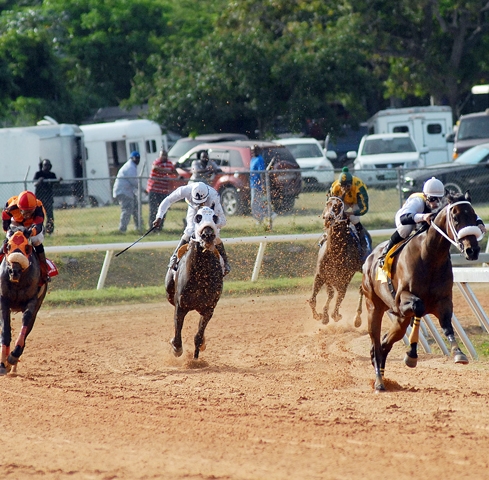 The final VI Gaming and Betting Control Act, 2020, which took effect Aug. 20 when it was Gazetted, includes numerous deletions and additions from the bill the House of Assembly debated, including provisions to form a regulatory Horse Racing Unit. (File photo: DAVID HELDRETH)

Gambling is now officially legal in the Virgin Islands, but it may not be as tightly controlled as legislators previously claimed.

When Premier Andrew Fahie introduced the controversial gambling bill in February, he promised that it would include extensive measures that would ensure the industry is well regulated.

But the final law passed by the House of Assembly — which took effect Aug. 20 when it was Gazetted with Governor Gus Jaspert’s assent — eliminates much of the regulatory framework included in the original bill, removing several rules designed to combat money-laundering and other crimes often associated with illicit gambling operations.

Though the final law still contains various industry regulations, it omits a four-page schedule that would have required gambling operators to implement internal controls and accounting procedures including regular audits, reports to regulators, and systems to prevent terrorist financing, among others. It also omits other requirements designed to track gambling dollars.

The law, which is now titled VI Gaming and Betting Control Act, 2020, proved controversial during debate in the House of Assembly, with some members sharing concern about the potential negative effects on society.

Besides repealing a section of the Criminal Code that outlawed gambling and holding lottery tickets, the law provides for the establishment of a Gaming Control Commission to regulate and manage the new industry.

The commission is charged with granting licences for gambling establishments; offering advice about regulating the industry; collecting fees and levies from licence holders; and ensuring that “licensed activities are conducted in a fair and honest manner,” among other responsibilities.

The law also lays out a framework for various forms of gambling, such as pool betting on horse races, machines in casinos, and lotteries.

Mr. Fahie, who brought the bill to the HOA for a second reading on June 11, presented it as an opportunity to bolster the VI’s economy by diversifying industries beyond the two “pillars” of tourism and financial services, both of which have recently taken a hit.

The initial bill closely mirrors a 2016 bill under consideration in Trinidad and Tobago, and it also contains similarities to the United Kingdom’s Gambling Act 2005.

But the final law — which wasn’t made public until it was Gazetted last Thursday — also omits many of the regulations listed in the original.

Legislators, for instance, removed a section and a schedule that together would have required gambling operators such as casinos to maintain specific “internal controls and accounting systems” approved by the Gaming Control Commission.

Under the four-page schedule, operators would have been obliged to provide the commission with an annual audit of their financial statements prepared according to International Financial Reporting Standards by a member of the Institute of Chartered Accountants of the BVI.

They also would have been required to implement commission-approved systems for handling money, recording revenue, securing their premises, and collecting information about earnings, personnel, junkets and other operations.

Though the final act omits those rules, it does empower the commission to revoke the licence of an operator who has “failed to comply with any other written law relating to the prevention of money laundering and combatting the financing of terrorism.”

Attempts to reach the premier and Health and Social Development Minister Carvin Malone were unsuccessful, but Opposition Leader Penn said he didn’t recall why the House removed the internal control requirements.

He explained, though, that the commission itself, which is empowered to make and enforce potential future regulations, would need some sort of oversight.

“You can’t just have the entity that is administering and doing all the ventilating itself,” he said. “It needs to have some kind of checks and balances to ensure that there is oversight over what they do in terms of regulations. There has to be some external oversight.”

He said the Financial Services Commission may serve that role, but he didn’t believe that decision had been made yet.

Another schedule removed from the original bill would have helped track gambling dollars by requiring certain data to be collected for each gaming device or machine.

This data would have included information about every device transaction, such as the payout ratio, the amount paid, the time of the transaction, and customer identification, among other information.

“That’s an important section, because the commission needs to manage that aspect of it to avoid fraud and that type of thing,” Mr. Penn said. “I don’t know why that was taken out.”

Gaming law expert I. Nelson Rose, a professor at Whittier Law School in California, told the Beacon that gambling laws typically aim to increase economic activity while minimising the risk of petty and organised crimes like money laundering and terrorist financing. A key aspect of that mandate is keeping close track of funds every step of the way, he said, adding that he saw no clear reason for removing accounting measures from the bill.

Several other topics were also nixed from the final version of the act, including “participation in a game of chance” and “remote facilities” for gaming.

The act also removes all references to “gambling,” which was mentioned dozens of times in the original bill. In the final law, the word is often replaced with the synonymous “gaming and betting.”

Similarly, the words “amusement machine” and “casinos,” were omitted or replaced with terms like “gaming machine” and “betting shop.” It is unclear why the terms were changed.

As examples of strong regulations in the final act, Mr. Rose pointed to clauses defining and penalising cheating. However, he added that both the initial bill and final version lack key regulations for tax rates and tracking money.

Such legislation, he said, typically includes specific figures for tax rates. In their absence, the commission will need to set regulations for levies on horse race bets and the like.

Mr. Rose said some places in the United States have been grounds for contention as governing bodies have been known to raise tax rates after casinos have invested in building gaming facilities.

Asked about tax rates, Mr. Penn explained that certain commission decisions will have to be approved by Cabinet.

He said the VI’s approach can create confusion, especially where definitions of certain terms are unclear.

Legislators also modified some of the fines included in the original bill. For example, the maximum fine for operating a wagering shop or club without a permit or allowing the use of a gaming machine was upped from $10,000 to $50,000. The maximum term of imprisonment remained two years.

The maximum fine for a person illegally operating as a bookmaker or providing illicit facilities for gaming went from $20,000 to $100,000.

A licensee who violates the terms of their permit now faces up to $30,000 in fines or six months imprisonment, compared to $5,000. Penalties for cheating or permitting a minor to gamble remain the same.

The final act also added a section establishing an appeals tribunal to serve anyone “aggrieved” by decisions made by the commission.

Under the law, Cabinet will appoint three to five members to serve on the tribunal who are “knowledgeable and experienced in matters relating to gaming and betting, horse racing and lottery.”

Also new in the final legislation is a “Horse Racing Unit” established in Schedule Two of the act. Working through the commission, the unit will regulate and supervise all aspects of horse racing and related activities in the VI.

Calls for the legislation of pari-mutuel betting as part of the strategic development of horse racing began in 2015 in the territory, though a bill to allow pool betting was first drafted in 2003 but eventually stalled.

The next step of implementing the new law will be establishing the commission, Mr. Penn said.

As the industry grows, he highlighted the need for greater protection of vulnerable community members. He said it is imperative to have educational campaigns and support programmes for those who may become addicted to gambling.

To help facilitate such efforts, the law requires the commission to establish two funds. A Rehabilitation Fund, which must receive 2.5 percent of the commission’s earnings, must “assist non-governmental organisations and other groups working with vulnerable persons and their families suffering the effects of gambling addiction and other forms of harm or exploitation associated with gambling.”

A Development Fund, which will receive five percent of the commission’s earnings, must be used to support sports, social and community work, arts and culture.

The law also requires the establishment of a Rehabilitation and Development Funds Committee that must deliver a report to the minister of finance and House of Assembly on the management of the funds within three months of the end of each fiscal year.

Mr. Penn said he had pushed unsuccessfully for more specificity in how the funds would be used. Without such details in the law, he added, it will be important to communicate closely with the commission on future needs.