More than 300 people, many of whom were dressed in formalwear, congregated on Saturday under the palm trees at Nanny Cay Resort and Marina, which was filled with the loud …

END_OF_DOCUMENT_TOKEN_TO_BE_REPLACED 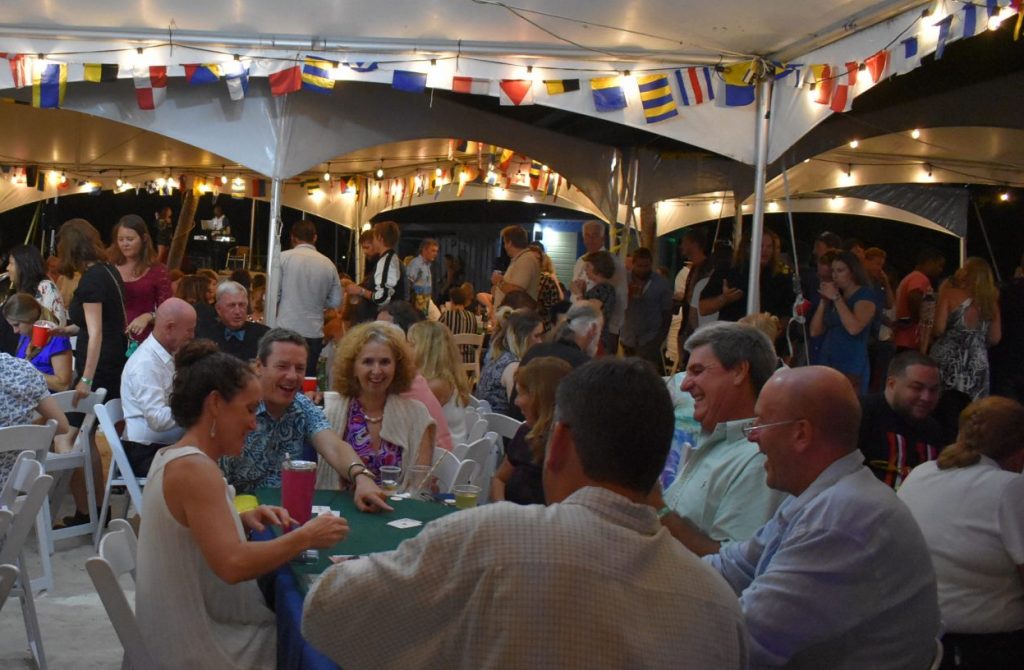 Gaming Night, which returned to Nanny Cay for the first time since Irma, raised some $50,000 this year. (Photo: GENEVIEVE GLATSKY)

More than 300 people, many of whom were dressed in formalwear, congregated on Saturday under the palm trees at Nanny Cay Resort and Marina, which was filled with the loud cheers of guests clamoring around hermit crab races at the long-awaited return of the BVI Humane Society’s Gaming Night.

This was the first time since Hurricane Irma that the organisation held Gaming Night, which has been a popular event for 35 years as well as its biggest fundraiser.

On Saturday the festivities represented a return to normalcy nearly a year and half after the hurricane, and an opportunity to dress up and bet money on blackjack, roulette, poker and hermit crab races.

This year the tables were set up on the beach under tents, instead of in the open-air building that was destroyed in the hurricane.

“Last year with recovery and everything, it wouldn’t have been appropriate, when everyone was getting back on their feet,” said Humane Society board member Nancy Woodfield Pascoe.

She added that the event was a success, and one attendee told her it was the best Gaming Night she had ever attended, reminiscing back to the days when they made chips out of chopped up broomsticks.

The organisation has held occasional fundraisers since Irma, but none as large as Gaming Night, which raised about $50,000, shattering the organisation’s record of $32,000, according to shelter manager Vijay Bissoondutt.

Attendees paid for $30 tickets as well as chips which they used to gamble and then exchange for any of the $28,000 worth of donated prizes, which ranged from televisions to island getaways.

The BVIHS also receives a portion of the revenue from the bar and restaurant, and earns money from the $500 that businesses paid to sponsor a hermit crab.

“A lot of people are just coming here to have fun. Of course they are also here to donate, but this is really the fun, dress-up party of the year,” said board member Els Kraakman. “You don’t have that many parties like this. People really look forward to it.”

Ms. Woodfield Pascoe said the funds are badly needed for the large influx of animals that were abandoned after Irma as many residents whose homes were destroyed left the territory.

The Society is also trying to revive its plans to relocate the Johnsons Ghut shelter to Josiahs Bay, a project that has been in limbo since the hurricane.

For years the BVIHS has planned to build a new environmentally friendly facility with more space, better grooming facilities, and a more sterile environment for the animals.

It already has a steel frame and an acre of land purchased in 2013, but Ms. Woodfield Pascoe said that after Irma the cost of hiring a contractor shot up and board members decided to use the organisation’s resources to repair the existing shelter, which saw its walls and roof largely torn off during the hurricane.

Since then their efforts have largely focused on drawing in volunteers and foster families to care for the animals. They have added three new board members to assist them, and have partnered with the non-profit PAW BVI to find homes for the pets both here and abroad.

Mr. Bissoondutt said the building in Josiahs Bay is still a “long shot” right now, especially since the organisation is committed to building a state-of-the-art facility.

“We want to make sure we have sufficient funds,” Mr. Bissoondutt said. “But once we do, we want to build something professional, something very modern for the BVI.”