A boat full of volunteers recently travelled from Tortola to the south side of Cooper Island, where they combed the sargassum-covered rocky shore for waste that had washed up on …

END_OF_DOCUMENT_TOKEN_TO_BE_REPLACED 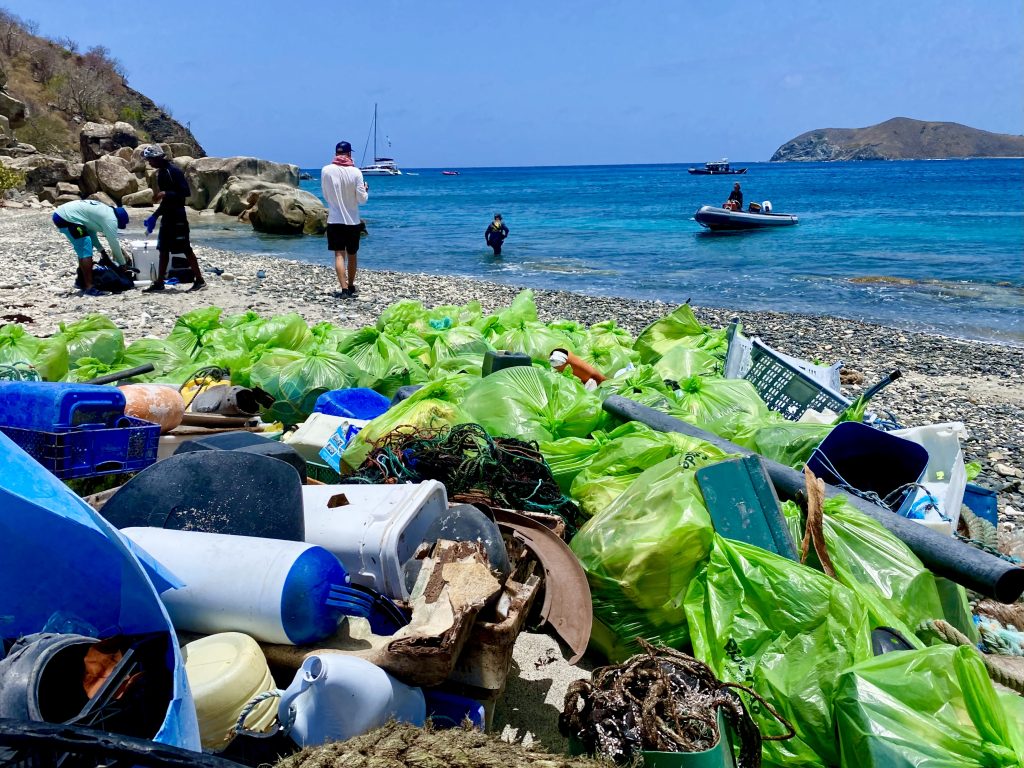 A team of about a dozen volunteers and organisers cleared Cooper Island’s rocky beach of discarded fishing gear and other waste recently, carrying the debris to a waiting dinghy. (Photo: DANA KAMPA)

A boat full of volunteers recently travelled from Tortola to the south side of Cooper Island, where they combed the sargassum-covered rocky shore for waste that had washed up on the beach. 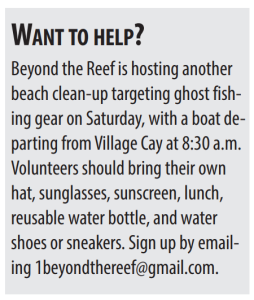 A wide assortment of oddities showed up in their haul, including Japanese toothpaste, faux-fur Crocs, an intact lightbulb, paintbrushes, and bits of plastic already beginning to crumble into microplastics. But the vast majority of waste came in the form of discarded fishing gear.

The Virgin Islands non-profit organisation Beyond the Reef focuses on tackling such tackle, hosting clean-ups along the territory’s shorelines, founder Kendyl Berna said during the July 16 event.

The Ocean Conservancy labels ghost fishing gear — equipment that is abandoned, lost or otherwise discarded — as the most harmful type of marine debris.

Recent studies estimate that more than 60 percent of the “Great Pacific Garbage Patch” — an infamous stretch of marine debris in the North Pacific Ocean that is too large for scientists to accurately measure — is comprised of ghost gear.

“Ghost fishing gear is a global problem,” Ms. Berna said. “What we call ‘ghost gear’ is any fishing gear that has been lost, abandoned or left derelict at sea. So that could mean that you carelessly threw your nets, ropes or pots out, or it could mean it was lost in a storm, or on accident. There are many reasons that ghost gear ends up in the ocean. But once it’s in the ocean, it continues to trap, entangle, smother coral, kill animals, and eventually end up on our shorelines, which is what we’re cleaning up today.”

The volunteers worked together to fill dozens of large trash bags full of waste, along with many items too large to fit. One large-rig rope required the strength of two people to carry it over a sandy knoll to the pickup point. A chain of volunteers then waded out into the water to carry bright green biodegradable garbage bags to a waiting dinghy to be transported to a larger vessel nearby.

Chris Juredin, one of the founders of Beyond the Reef, utilises his fleet from Commercial Dive Services to help with such projects throughout the territory.

On the day of the clean-up, he highlighted the importance of investing in the preservation of the marine ecosystem’s health not only for the sake of critical marine life, but also for the VI’s invaluable marine sector.

Ms. Berna said while some of the trash comes from fishers in the territory, much of the larger equipment floats in from other Caribbean fisheries.

“Most of the ghost gear we found today had been broken down into really small pieces, meaning that it started as what was a really big net that is probably caught on coral elsewhere, was broken down, and made its way here,” she said. “All the different forms of these nets are dangerous, whether it’s big or small.”

Divers working with Beyond the Reef have seen the effects first hand, she said, noting that turtles and whales have been untangled from nets in VI waters this year.

“But really, we want to do more prevention,” she said.

She noted the challenge of patrolling the VI’s waters and said she hopes increased enforcement of fishing regulations will make a difference in the future.

Rules that promote best practices and eco-friendly fishing gear are a step in the right direction, Ms. Berna added.

One example is the requirement in the VI to outfit traps with biodegradable panels. That way, if a fishing pot is lost during a storm or otherwise, it doesn’t turn into a “death trap” where marine life is trapped, perishes, and then attracts more marine life that in turn gets trapped.

Changes need to be made at the regional level as well, she said. After all, floating trash doesn’t stop at international borders.

Besides legislative changes, Ms. Byrna said individuals can make a difference by being mindful of how their seafood is sourced.

Beyond the Reef recently addressed this issue on its Facebook page by suggesting questions for consumers to ask about the seafood they purchase: “Is it a somewhat sustainable species caught from a local fisherman using a line? Or is it shrimp from a trawler whose bycatch is up to 20:1 shrimp to other species that get discarded?”

The post added, “This isn’t a war on [shrimp], but when people ask ‘what can I do?’ you can start to put pressure on grocery stores and restaurants to label their food so that us as consumers can make an educated purchase as well as put pressure on yourself to try to be as sustainable a consumer as you can be. As sad as the pilot whale stranding was, a lot more than that die from commercial trawling and drift nets each year.”

The statistics tell a positive story: With double the man hours, last year’s team had collected 616 cubic feet of plastic and 831 cubic feet of fishing gear over approximately the same shoreline area.

“In previous years, we also collected a lot of what we think was probably hurricane Irma and Maria debris, so it wasn’t just fishing gear,” Ms. Berna said. “It was also just a lot of flying trash and debris that ended up in our waters.”

This year’s collection offered a picture of more typical waste that washes up, including a lot of microplastics trapped in the sargassum.

These pieces eventually break down enough from the force of the waves that they are easily consumable by marine life — and thus enter the food chain.

An estimated 15 to 51 trillion microplastics particles are floating on the surface of the world’s oceans, according to a recent study published by the online scientific journal IOPscience.

Beyond the Reef is organising a follow-up beach clean-up on Aug. 20.