Kendol Arthur, wearing a silly hat with a pink tutu attached, accepted a gift certificate to Amara Spa as the winner of a scavenger hunt which was held in the …

END_OF_DOCUMENT_TOKEN_TO_BE_REPLACED 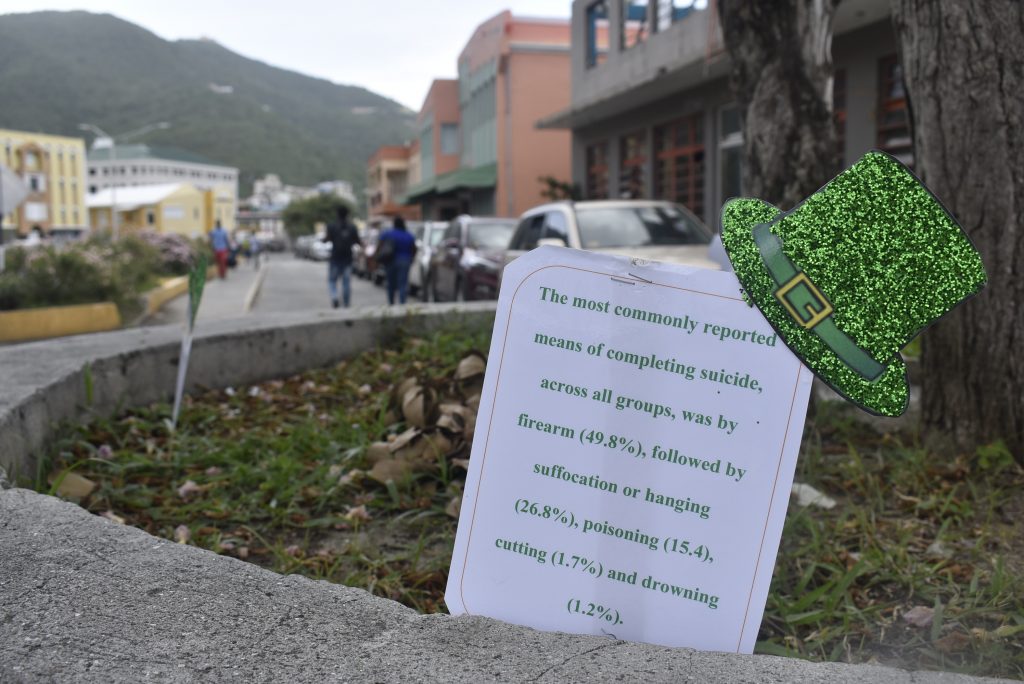 Lists of facts like these were posted along Waterfront Drive last Thursday as participants of the Golden Hat Hunt showed their support for World Mental Health Day. (Photo: ZARRIN TASNIM AHMED)

Kendol Arthur, wearing a silly hat with a pink tutu attached, accepted a gift certificate to Amara Spa as the winner of a scavenger hunt which was held in the Virgin Islands as part of a global movement to raise awareness about suicide.

“Our slogan this year is ‘think and talk before you tip your hat’ because we want people to be more vocal about the mental health issues and we want them to put their thinking caps on to find more positive ways to resolve life’s issues,” said Dr. Virginia Rubaine, director of Community Mental Health.

Agencies and businesses showed their support for the cause either by participating in the hunt or by other means individually. Many took to social media to post pictures of their silly hats and used the hash tags #BVI2019WorldMentalHealthDay and #BVISillyHatSuicideAwareness.

Additionally, along Waterfront Drive in Road Town, hats and statistics about suicide awareness and prevention were posted for all to see.

Residents who notice signs of mental illness are urged to seek help for themselves or their loved ones by contacting Community Mental Health and Substance Abuse Services in the Peebles Hospital by calling 852-7670.

World Mental Health Day was first celebrated in 1992 at the initiative of the World Federation for Mental Health, a global mental health organisation represented in more than 150 countries around the world.

According to Dr. Alberto Trimboli, president of WFMH, suicidal behaviour has existed throughout human history, but has “reached alarming statistical levels.”

According to the World Health Organisation, more than 800,000 people die by suicide globally each year, and suicide is the second leading cause of death among people 15 to 29 years old, behind road traffic injuries.

In a statement released before this year’s World Mental Health Day, Dr. Trimboli said the object of making suicide prevention the theme of the day is to attract the attention of governments “so that the issue might be given priority in public health agendas around the world.”