Guests at the Governor’s Gourmet Gathering on Friday had two years of gluttony to make up for — and they easily did. Virgin Islands Search and Rescue Operations Director Julie …

END_OF_DOCUMENT_TOKEN_TO_BE_REPLACED 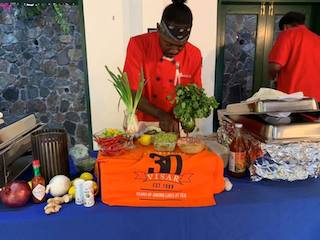 Guests at the Governor’s Gourmet Gathering on Friday had two years of gluttony to make up for — and they easily did.

Virgin Islands Search and Rescue Operations Director Julie Schneider described the fundraiser — which featured the mouthwatering wares of 12 Virgin Islands-based purveyors of food and drink — as “the most successful in the ten years that the event has been going on,” adding that the $22,000 raked in was an increase of more than $2,000 from November 2016, the last time the event took place.

He added, “We’re back this year, lighter and leaner but no less enthusiastic.”

Governor Gus Jaspert, patron of the 30-year-old organisation, explained that he was delighted to get his first chance to host the gathering, with Hurricane Irma having thwarted his plans the first time around.

“We were in quite a different place as a territory [in 2017],” he explained. “It’s fantastic to have it back again.”

Grabbing a plate — complete with custom hole on which to perch their drinks, such as an Aperol spritz from TICO — guests worked their way around the courtyard, sampling, among others, shrimp and tortellini from Grape Expectations, fish curry from Omar’s Fusion, brisket from J Blakx Jerk BBQ, and octopus ceviche and beef tartare from Red Rock Restaurant. They could top it all off with a vegan brownie from Cookie Faery.

Mr. Jaspert said the purpose of the event was threefold: fundraising for VISAR; raising awareness about the organisation that he called “a critical part of the BVI;” and enjoying the food and the fun.

“Everybody needs to let their hair down now and then,”he said.

He added that he was proud to witness the way VISAR has bounced back since losing part of its base in the 2017 storms. “They took a whack — every- body did — in 2017, but they’ve run their organisation to have some reserves which they could dip into immediately to get things going,” he said, noting that the organisation has rebuilt and purchased a new boat, and over the past 18 months after the hurricane it provided crucial support across the islands. “They have done such a great job rebuilding, but this is about securing their future for the next 30 years.”

In between the mellow acoustic sounds of the 3Gs, patrons bid on live and silent auction items like dive trips, spa sessions and fishing charters.

Newly elected Premier Andrew Fahie urged patrons to dig deep in their pockets, saying, “I happen to know some of the persons with VISAR from the time I was quite a young chap — I was going to say small, but I was never too small.”

He told patrons to turn to their neighbour and declare their love for VISAR.
“It is one thing to love what they’re doing, but you also have to love putting your hand in your pockets and supporting their labour,” he said.