Government aims for growth in 2022 budget

Two contrasting pictures of the territory’s economic future emerged during the budget debate this week in the House of Assembly. Government legislators described 2021 as a successful year despite the …

END_OF_DOCUMENT_TOKEN_TO_BE_REPLACED 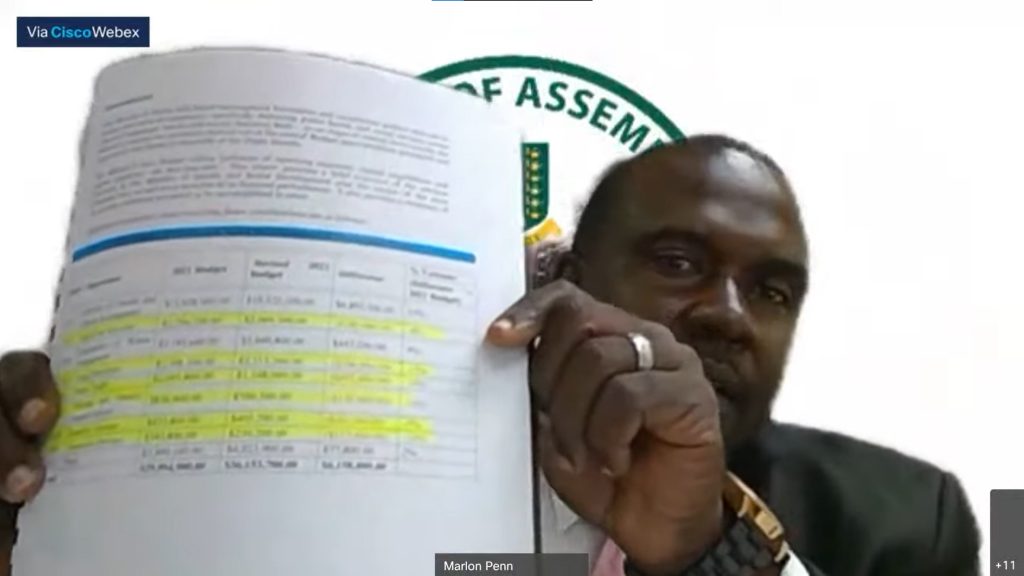 Two contrasting pictures of the territory’s economic future emerged during the budget debate this week in the House of Assembly.

Government legislators described 2021 as a successful year despite the challenges of the pandemic, and they said the 2022 budget is designed to continue that path.

“All the signs are showing everything is in place for the Virgin Islands economy to surge forward in 2022,” Premier Andrew Fahie said. “But the key is vigilance.”

But opposition members — who dominated the first day of debate on Dec. 14 — claimed that infrastructure problems persist and that the new budget lacks sufficient funding for the needed long-term investments. Opposition Leader Marlon Penn, for instance, said the 2022 budget makes sweeping cuts to social programmes and doesn’t provide the financial backing for new industries the government publicly promotes.

“We have to show the full picture,” Mr. Penn said during the sitting, which was held virtually because two HOA members and a staffer had come in contact with another officer who tested positive for Covid-19.

Deputy Speaker Neville Smith chaired the meetings, where each member had two hours to offer comments on the draft budget.

The premier opened the debate by reviewing some of the challenges his administration faced when taking office in 2019, including the state of schools and other public infrastructure, overdue increments to public officers, and outdated public services.

“Never before in the history of the Virgin Islands has the country and its elected government faced so many challenges of such intense magnitude at the same time,” Mr. Fahie said. “Since 2017, there has been a high demand on government with limited supply and in a global economic environment that is imposing a multitude of pressures.”

He celebrated the territory’s ability to stay afloat while countries around the world struggled to deal with increased costs associated with the pandemic that simultaneously stymied economies.

“Your government, together with all our partners in the departments, units and agencies, and with our valued private sector and other stakeholders, have positioned the Virgin Islands economy for growth,” he said. “This is evident because we have not only done so with past budgets and this budget, but we are also working with the United Nations subsector group that is working with us to formulate the National Sustainable Development Plan, which will be a forecast of how we want to see the Virgin Islands build toward that within the next 15 to 20 years and beyond.”

Though “not everyone will get what they want” in the upcoming budget, Mr. Fahie said it encompassed key areas that would drive revenue.

However, the opposition leader said such claims were only “smoke and mirrors” considering the government still owed nearly $70 million to vendors as of the last question-and-answer section in the House. The BVI Airports Authority alone owes nearly $1.8 million on contracts that are in some cases more than 90 days late in being paid to more than 120 vendors, Mr. Penn said.

As one example, he claimed that government widely celebrated the construction of a visitor centre at the Beef Island airport, but a contractor who expended personal resources on the project is still due some $106,000.

He also said the recent closed-door Standing Finance Committee deliberations revealed that the government withheld public officers’ pensions and benefits at the BVIAA when it was in dire straits.

“And we’re bragging that we’re one of the few without deficit spending,” he said. “But you’re not only running the operation on the backs of businesses, you’re now running it on the backs of your employees. That removal of funds from person’s pensions is criminal, and those employees need to be paid interest that would have accrued from the time that money was taken.”

He also accused the House of wasteful spending on half a million dollars in legal fees incurred last year, not including pending invoices — twice what the Attorney General’s Chambers spent in two to three years, he said.

And despite promises to “go green” with digitised government services and HOA operations, Mr. Penn said only $100,000 is included for the transition.

He added that the budget doesn’t include sufficient funding to back up the government’s goal to diversify the territory’s economy.

For instance, he said, only $50,000 has been slated for a new fishing complex.

Sports tourism was another focus of potential growth, but Mr. Penn said only $50,000 is planned for sports facilities, and he couldn’t find any money listed in the budget for a stadium project planned with the BVI Football Association.

Opposition member Mitch Turnbull said more needs to be done to collect outstanding government revenue, which was estimated at $50 million in 2015, and to create a clear plan for deciding what to forgive as too far gone.

He added that he has struggled to get answers from government about an overarching plan to help businesses mitigate their losses the past few years and move forward.

Government-side legislators, however, painted a more optimistic picture of the possibilities under the 2022 budget.

Health and Social Development Minister Carvin Malone said expansions are planned for the hospital next year, as well as work on the sister islands’ clinics.

He also highlighted the completion of eight social homes through the Housing Recovery Assistance Programme.

“Next year, it is our intention to have a number of additional social homes completed,” Mr. Malone said. “We have more applications, of course, than we have money. But the fact is that we intend to construct another 13 homes for 2022.”

He said the funding that was put on hold this year will be given to some beneficiaries next year. This effort, he added, will include repairs to 25 homes and 14 grants.

Mr. Wheatley called for reform of immigration and labour processes.

“If we continue to give out work permits willy nilly, and our people are still at home watching people going to work, it will create problems down the road,” he said.

He stressed the importance of providing local opportunities to belongers and giving them multiple chances to access those opportunities.

New systems put in place at labour and immigration still need improvements, he acknowledged, adding that an online payment system for work permits will be rolled out in January. Mr. Wheatley also defended legal fees being paid in the Commission of Inquiry, stating that the territory needs to spend the money to defend its reputation.

“This country is heavily funded by financial services,” he said. “If your country’s name is tarnished as a drug dealing, money-laundering tax haven, you cannot sit and put your head in the sand and pretend it’s okay. You have to fight back.”

Mr. Penn complained that budgeted funding is also light for social programmes. Community services funding, he noted, was cut in the last budget cycle by 33 percent, or $113,000. Disability services saw a seven percent cut; children and family support services got a 16 percent cut of about $136,400; public health was cut by 24 percent or $497,800; social protection was cut by 12 percent or $294,900; and aged care services was cut by eight percent or $186,900, according to the opposition leader.

Mr. Turnbull also addressed social issues, including the National Health Insurance system, which has been long criticised for its perceived lack of financial sustainability. Mr. Turnbull argued that funding that NHI should have been given at the start needs to be invested in it now.

He added that the territory needs to invest more in adequately compensating medical professionals so fewer people feel compelled to leave the VI for better-paying jobs abroad.

“It’s overbearing sometimes and even disheartening to hear what the Dr. D. Orlando Smith Hospital doesn’t have — the specialities that we don’t have and the equipment that we don’t have,” he said. “If we are going to continue to build this great territory of ours, investments in our people must be first and foremost.”

Mr. Malone agreed that a forensic examination of the finance of health services is “critical” to the territory’s survival.

Opposition member Julian Fraser also spoke, urging government to encourage banks to grant moratoriums for mortgages and loans to struggling residents and businesses. He also complained that community centres in his Third District have not been functional since the 2017 hurricanes.

Additionally, Mr. Fraser and his opposition colleagues noted that issues with inadequate sewerage systems desperately need to be addressed.

Though $8 million was pledged to fix these systems, Mr. Penn said reports show $6 million of it was paid back to the Treasury. He added that the only related action that seemed to take place in the past four budgets was taking one contract from an existing deal and giving it to a new contractor.

Mr. Fraser said he learned in the SFC that repairs to the sewerage treatment plant in Paraquita Bay would cost about $2.5 million, but the payment is scheduled to be disbursed across three years even though the project should take only six months to complete.

Mr. Turnbull said government needs to address such system-wide issues before proceeding with its plan to create a new statutory body for water services. Mr. Penn urged the government to present a clear plan for addressing the issues, including any necessary debt restructuring while rates are low.

Mr. Penn also said he was disappointed with a lack of professionalism during SFC debates, and he alleged that opposition members weren’t able to ask all their questions.

He also shared his belief that the speaker of the House position should be filled by an elected representative.

He and other HOA members noted that final drafts of the budget were delayed, though they commended staff members for assembling the budget information in a limited amount of time. Mr. Penn said more care should be given in developing the budget, and more of the responsibility should fall to individual ministries rather than the Ministry of Finance.

“More than ever, the House of Assembly is becoming an extension of the executive, which is a dangerous place for us to be,” he said.

The debate continued through Dec. 15, with the premier and other government members still scheduled to speak after Beacon press time.