Government officials have devised what they believe is a solution to the looming European Union blacklist threat, according to Neil Smith, the executive director of government’s Office of International Business …

END_OF_DOCUMENT_TOKEN_TO_BE_REPLACED 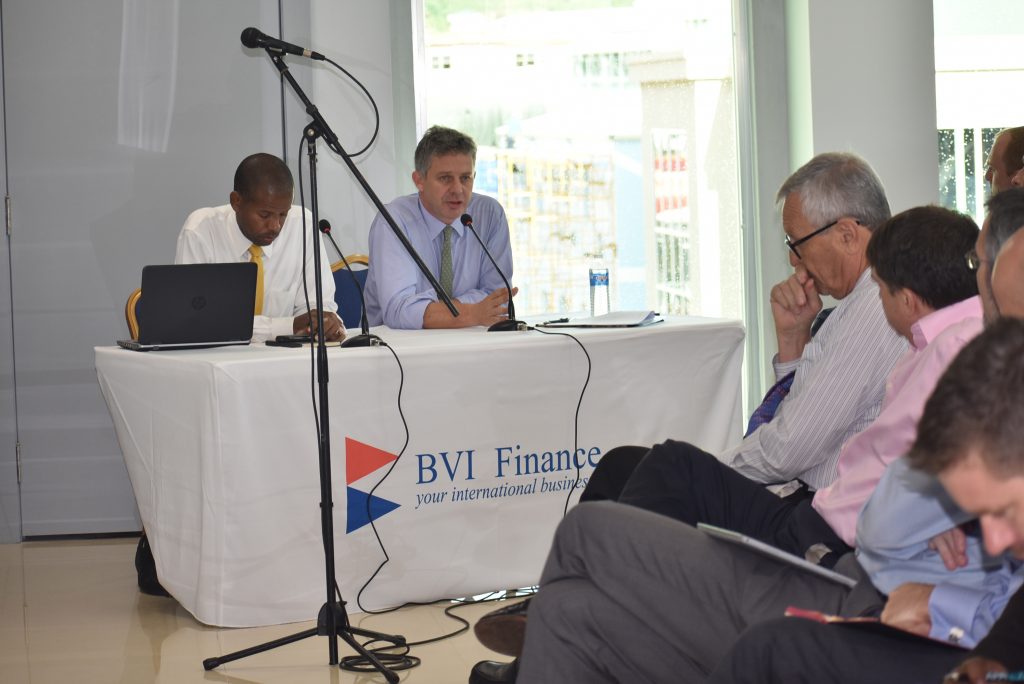 Peter Tarn, a partner at Harneys, and Neil Smith, the executive director of government’s Office of International Business (Regulations), spoke at a BVI Finance Limited event at the Cutlass Tower earlier this month. (Photo: CLAIRE SHEFCHIK)

Government officials have devised what they believe is a solution to the looming European Union blacklist threat, according to Neil Smith, the executive director of government’s Office of International Business (Regulations).

The EU has threatened to place the Virgin Islands on an anti-tax-avoidance blacklist at the end of the year if the territory doesn’t address perceived issues concerning “economic substance” requirements in its tax regime.

Both Mr. Smith and Peter Tarn, a partner at Harneys, spoke to financial services industry stakeholders at a BVI Finance Limited event earlier this month about the issue.

The EU’s definition of substance, Mr. Smith explained, is “not very sophisticated.”

The organisation wants to see VI companies have local physical premises, significant expenditures in the territory, and employees working on the ground — an unlikely outcome for the 400,000-plus entities registered in the some 60 square miles of the VI, he said.

Still, Mr. Smith said the VI government has presented proposals to the EU. European officials expressed concerns about the first pitch, so government worked on some amendments and resubmitted a proposal this month.

“We have come up with a solution that we believe will work,” the Ministry of Finance official said. “We expect to hear back from them sometime in the next month. … A significant portion of the industry should be protected.”

In September and October, Cabinet appropriated up to $400,000 to hire two English lawyers to devise a legislative solution to the EU’s substance requirements.

The details of government’s proposals have not been provided to the public.

Mr. Tarn acknowledged the potentially serious consequences of the situation.

“I think that this is the most existential threat that the industry has faced since probably 1999,” the lawyer said. “I don’t want to be overdramatic about it, but compared with the transparency agenda, compared with the other things we’ve seen in the last 20 years, this is frankly the most difficult to deal with.”

Mr. Tarn, however, noted that the EU substance requirements only apply to what the EU considers “highly mobile activities” — banking; insurance; fund management; finance and leasing; headquarters; shipping; intellectual property holding; and distribution and service centres — through entities that fall in the EU’s narrow definition of holding companies.

In negotiations, the VI and other overseas territories and Crown dependencies facing substance requirements decided to “sacrifice” intellectual property-holding companies, Mr. Tarn explained, because the EU was “obsessed” with them and they don’t represent a critical part of the industry here or in other jurisdictions.

But headway was made in other aspects of the negotiations, he noted.

“We believe we have reached a point [with the EU] where there will be significant entities which are not within the relevant activity criteria, and that’s the kind of good news,” the lawyer said.

The requirements won’t apply to companies that just incorporate in the territory.