The government so far has provided 3,977 official documents amounting to 72,902 pages to the United Kingdom commission of inquiry, Premier Andrew Fahie told the House of Assembly on April …

END_OF_DOCUMENT_TOKEN_TO_BE_REPLACED 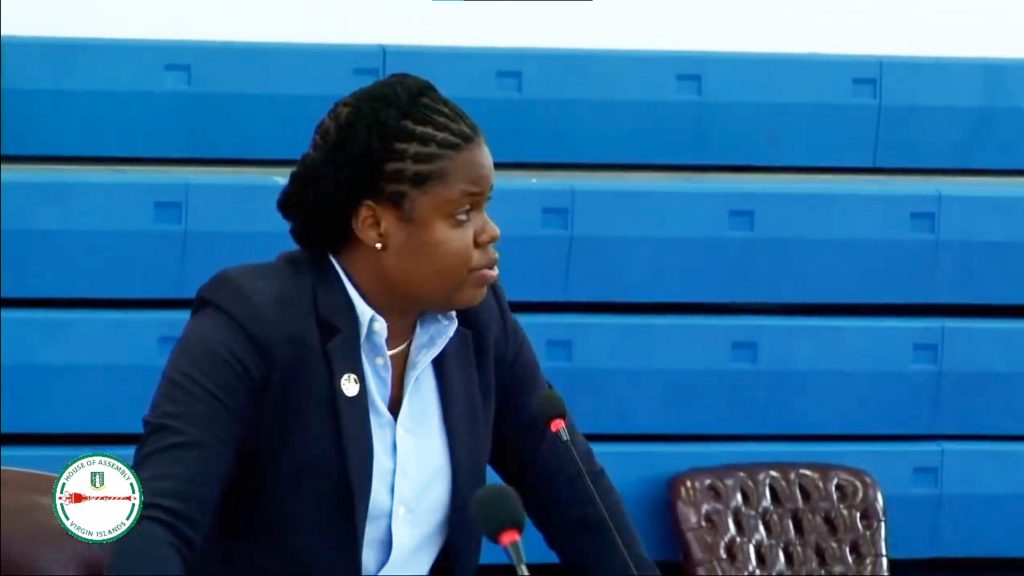 In an unprecedented move in the House of Assembly, Junior Minister for Tourism Sharie de Castro on Tuesday asked Premier Andrew Fahie about the government response to the United Kingdom’s ongoing commission of inquiry. (Screenshot: HOA YOUTUBE)

The government so far has provided 3,977 official documents amounting to 72,902 pages to the United Kingdom commission of inquiry, Premier Andrew Fahie told the House of Assembly on April 20 after Junior Minister for Tourism Sharie de Castro broke with precedent and became the first junior minister to question a minister during an HOA meeting.

Typically, the question-and-answer segment of HOA meetings is led by members of the opposition, who criticised Speaker of the House Julian Willock’s decision to allow Ms. de Castro to go first on April 20.

Ms. de Castro first asked Mr. Fahie to explain his government’s policy “in respect of ” the commission of inquiry into potential corruption in the territory. Then she asked him to explain the “function and remit” of the government’s Inquiry Response Unit and its progress so far.

Reading from a detailed prepared statement, Mr. Fahie replied that government has been working diligently to fulfil information requests from the commission, making only one exception for what he described as extremely personal data about residents seeking aid after Hurricane Irma.

The commission’s demands, he claimed, have placed a “heavy burden” on ministries and statutory bodies in the territory, but officials have been doing their best to respond in a timely manner with help from the IRU.

“I know there have been occasions where public officers have had to work long hours, including through the weekends, to accommodate the inquiry’s timetable,” Mr. Fahie said.

He said the “politically independent” Inquiry Response Unit has been working to assist public officials in providing necessary documents to the commission within five business days of any request.

UK Queen’s Counsel Sir Geoffrey Cox and the law firm Withersworldwide are helping facilitate the unit’s work, according to the premier.

Cabinet decided to establish the unit on Feb. 5, two weeks after the inquiry officially launched, to fulfil the commission’s requests and uphold the legal duties and interests of the government, officials announced that month.

Mr. Fahie said April 20 that every external member of the unit has sworn to protect the confidentiality of government information.

The body’s tasks include sending document preservation notices to government offices; working with information technology teams to ensure the secure handling of documents; setting up a secure digital platform for managing documents; and more, he explained.

As of April 12, government bodies had received 56 information requests, and the IRU had helped fulfil 51 of them within the requested five-day window, according to the premier.

“Some delays occurred because the commission’s secretary had until then required the documents to be sent to the UK by email, with a limit of eight megabytes of digital information,” Mr. Fahie said. “Because of the volume of data, that method had required the IRU to split up the digital files and send hundreds of individual emails, some of which had bounced back and failed to be delivered. This means of disclosure was obviously time consuming and unsatisfactory.”

The unit, he added, later found a better platform for sending the documents.

Of the 3,977 official documents provided so far, some date back decades before the current administration took office two years ago, according to the premier.

In only one instance, he added, a decision was made to withhold information from the COI.

The refusal came in connection with requested documents that he said dealt with “hardship applications made by Virgin Islanders under the government’s hardship payment scheme set up in the wake of the devastation of Hurricane Irma and lately the coronavirus pandemic.”

“This request appears to have been made under the misapprehension that honourable members were themselves paid the money for distribution to their constituents since it sought details of when and how the funds were transferred to a member,” Mr. Fahie said. “In fact, the monies were disbursed by the Ministry of Finance on the basis of a standard form, written application with supporting documents, and information attesting to the particular hardship suffered by individuals.”

Mr. Fahie said the information request sought data about the applicants and documents they provided. However, the premier argued that such details are deeply personal — and sometimes include medical information — and often were provided in the midst of extreme distress.

He said it’s important for government to be transparent about the expenditure of public funds, but he maintained that the personal circumstances of individuals should be protected.

“The IRU and the attorney general suggested that a more limited disclosure of the names and contact details of applicants might, together with the sums awarded, at least initially suffice for the commissioner’s purpose,” Mr. Fahie said, adding that further information would be provided if legally justified.

The commission eventually withdrew the broader request, he added.

In a follow-up question, Ms. de Castro asked why the commissioner would have asked for details of how these funds were distributed to HOA members’ constituents.

Again apparently reading from a printed statement, the premier said he could only speculate as to the motive, but he said he believed the commissioner had been “given inaccurate information” about the system for awarding financial aid.

Mr. Fahie noted that the territory does not have an established unemployment benefit scheme, and the current public assistance system is the main social safety net. These funds come from the Ministry of Finance, he said, not as cash from individual members.

Past VI governments have faced criticism about similar financial assistance to constituents.

The HOA’s longstanding Assistance Grants Programme provides annual allocations for elected representatives to disburse to their constituents as they see fit.

A 2009 audit of the programme criticised it for lack of transparency and accountability, noting that it had allowed government funds to be used to purchase items including a saxophone, tickets for models at a car show, lingerie, and even a mortgage payment for one resident who had a private business relationship with the legislator who okayed the payment.

The then-Internal Audit Unit described the HOA-member-crafted guidelines for the programme as “grossly inadequate” and called for greater accountability and enforcement of requirements to obtain funding. The programme, however, continued, and officials have not announced comprehensive reforms to it since then.

On April 20, Mr. Fahie did not say whether or not the programme he described was related to the Assistance Grants Programme.

The premier also questioned the commission’s motives for investigating the Irma assistance and reiterated his concerns that the inquiry’s announcement in January was “disproportionate and needlessly damaging” to the VI’s reputation.

“I believe that this may have been driven in part by unfortunate and sometimes personalised political disagreements between the elected and unelected arms of government, and by a breakdown in the relationship of trust between them,” he explained on April 20, adding that he hopes this relationship can be repaired.

Meanwhile, the government will work to aid the commission with its probe, he said, adding that he hopes in return the commission will “form a fair, balanced, transparent picture of the situation in the Virgin Islands.”

He again urged as much possible transparency in the next stage of the investigation, which focuses on hearings.