Virgin Islands culture and art were central during a week of community meetings hosted by government ministers throughout the territory, but leaders also addressed issues including the development of Road …

END_OF_DOCUMENT_TOKEN_TO_BE_REPLACED 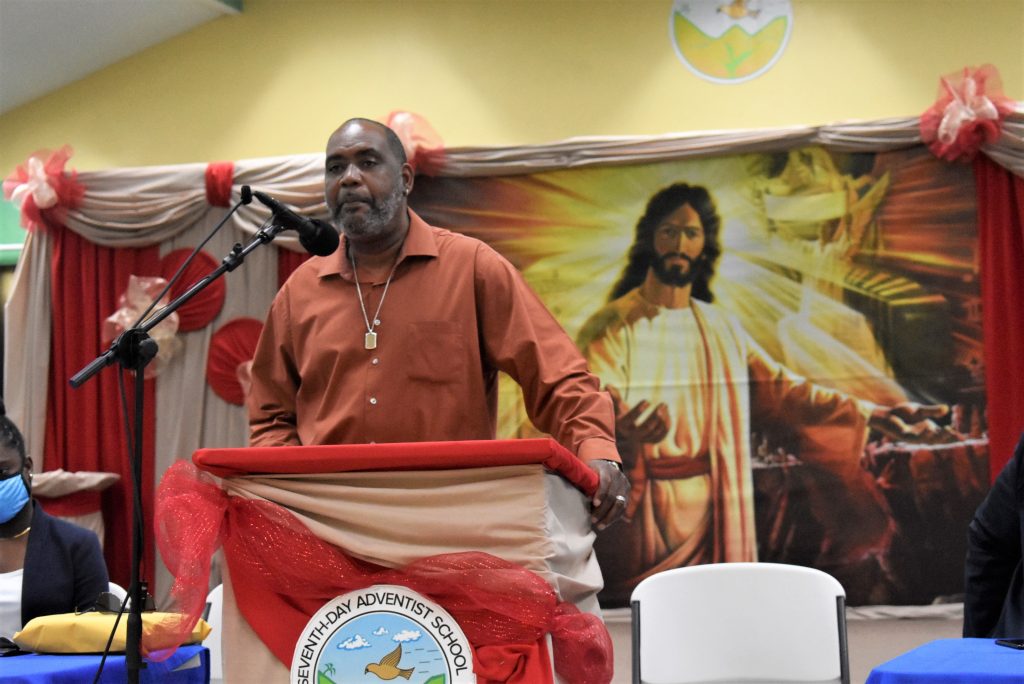 Deputy Speaker of the House Neville Smith speaks during a Tuesday evening meeting in Sea Cows Bay. He was among several government members to provide updates in a series of similar sessions. (Photo: ZARRIN TASNIM AHMED)

Virgin Islands culture and art were central during a week of community meetings hosted by government ministers throughout the territory, but leaders also addressed issues including the development of Road Town’s downtown area and the pandemic’s affect on everything from road work to the planned creation of new industries.

“We’re not doing all of this — whether it be airports, seaports, traffic, farming, fishing — in isolation,” Mr. Fahie said. “We are working also on the National Sustainable Development Plan to put it 15 years down the road, 20 years down the road.”

Consultants who are spearheading the draft plan also attended, telling attendees that they plan to host meetings with community members in February to get their thoughts on what should be included.

Mr. Fahie said the consultants are being paid by the UN Economic Commission for Latin America and the Caribbean.

During another community meeting on Tuesday evening in Sea Cows Bay, ECLAC consultant Dr. June Soomer spoke about the plan.

“The National Sustainable Development Plan is tied to the [UN] sustainable development goals. We have 17 of these goals,” she said. “We are not here to create more work for public servants: We are here to ensure that the government and subsequent governments can meet national, regional and international obligations.”

Dr. Soomer noted the importance of an “overarching plan” where all the ministries are connected and working toward a common goal. As part of that effort, she recommended annual reports by the government while working toward the sustainable development goals.

Hailing from St. Lucia, Dr. Soomer is spearheading the initiative in the Virgin Islands for six months.

Also at the Jan. 13 meeting, Natural Resources, Labour and Immigration Minister Vincent Wheatley said his agencies are preparing to allow work permit applications to be completed fully online by the end of January.

He also said Cabinet earlier that day agreed to a number of reforms for the National Health Insurance system and Social Security Board, though he did not offer any further information about the pending changes.

“In Labour and Immigration, we’ve taken some tremendous reforms that should help us manage the workforce a lot better than we currently are doing,” Mr. Wheatley said.

Though he said policy decisions are being driven by recent data collection, he did not provide unemployment numbers or other statistics.

Mr. Wheatley also said passing through customs at the airports should be much easier following the construction of new kiosks.

“For those of you who’ve travelled recently, when you came to the airport, if you’re a belonger, [it takes] about 20 seconds to get cleared,” Mr. Wheatley said. “If you’re a non-belonger, maybe a minute or two. As things open more, we’re going to have kiosks. So if you’re a belonger, in the future you won’t go in a line at all — just for customs.”

He said the kiosks should be completed by the end of February.

Mr. Wheatley also gave an update on the project to provide affordable housing to first-time homeowners in the Joes Hill area. The first home, he said, is set to be finished around April.

The SSB originally broke ground on the project in April 2017, less than five months before Hurricane Irma devastated the VI, and then relaunched in May 2020 after signing a $17 million contract with James Todman Construction that leaders described as part of their pandemic stimulus package.

The development involves the construction of 25 buildings that include a commercial space and 52 residential units with a mix of one-, two- and three-bedroom options, leaders have said.

He said the Caribbean Development Bank helped secure a shipment of 845 laptops in addition to the 500 already approved for purchase in May by Cabinet through a no-bid contract of $138,000 to Infinite Solutions. The 500 laptops were delayed by soaring demand resulting from the pandemic, but Dr. Wheatley said both shipments have since arrived in the territory.

“We are well equipped as it pertains to technology in schools,” he added.

He also said he is working with Department of Culture Director Dr. Katherine Smith to reorganise the department and potentially designate a specific person responsible for interacting with the schools and helping promote VI culture in curriculums.

From a building perspective, works are planned on several sites, including the Elmore Stoutt High School.

“We are developing a master plan for this campus,” Dr. Wheatley said of ESHS. “Because as you can see, we have some buildings which are aged, 40-50 years old, and need some major rehabilitation.”

A longstanding land dispute at Enis Adams Primary School has recently been resolved, he added. He said government would be signing half a dozen contracts for work on schools in the territory this week.

Health and Social Development Minister Carvin Malone also spoke, saying that medical teams are planning to expand into a wing of the former Peebles Hospital to create a separate unit for people with Covid-19.

Moving forward, Mr. Malone said the hospital’s lab for processing Covid-19 test kits will have the capacity to run 500 tests a day. He anticipates a turnaround time of 24-48 hours for travellers waiting on their results to exit quarantine.

Also under his portfolio is waste management, and Mr. Malone indicated significant progress is being made on the removal of derelict vehicles on both the land and the water.

“We have signed a contract to take all of the derelict vehicles from Pockwood Pond to a contractor, whether it’s in Trinidad or Colombia and so forth,” Mr. Malone said. “But we’ve signed with a local contractor. They have to make two trips with the 5,000-tonne barge. After the first trip is done, we are going to restart our war on derelict vehicles. If it is a derelict, we will tag it, mark it, and ship it.”

He did not name the contractor.

Members of the public who transport non-functioning cars to one of the designated disposal sites may receive $80 per vehicle, he said.

In December 2019, government invited expressions of interest in designing, financing and building the centre.

Procurement Director Ishma Rhymer said in the release that government aimed for the centre to be “fully constructed and operational by 2022.”

The premier noted that “considerable work” has been done to prepare for the redevelopment.

During the meeting, he said that the timelines for some development projects have to be adjusted because of challenges posed by the pandemic.

Also at the meeting, Junior Minister for Tourism Sharie de Castro said she will be leading the development of a new National Tourism Plan. She said the committee developing the plan will be consulting the public and industry partners in the coming weeks.

“This is the right time to do it, as we consider Covid-19 and the [impact] of a pandemic to our economy, specifically to tourism, and how we could ensure that we diversify our economy and look at different industries,” Ms. de Castro said, giving the example of ecotourism.

Mr. Fahie said the territory has been able to work on $20 million worth of projects supported by loans from the Caribbean Development Bank.

Mr. Rymer said progress continues at the Ralph T. O’Neal Administration Complex, which was heavily damaged by the 2017 hurricanes.

“We have already done demolishing on the west side, and we are doing works now on the east side,” Mr. Rymer said. “We have a few more departments that need to vacate.”

He also said the ministry is working diligently to rectify “some aging sewage issues and water issues” in the Road Town area.

Work to develop sewer systems at East End and Cane Garden Bay “should start quite soon,” he added.

He explained that the ministry made repairs at the reservoirs, conducted leak detections, and said that residents have told him that water is more consistent in the area.

During the meetings, several attendees expressed appreciation for the work that has been carried out thus far to contain and minimise the spread of Covid19 in the territory and shared their ideas for eventually reintroducing cruise ships in the VI.

Other residents had more specific requests, like designating handicap parking space near the emergency entrance at Dr. Orlando Smith Hospital.