Last September, Opposition Leader Marlon Penn told the House of Assembly about an “incident” that occurred during the 2019 budget process after he walked outside the HOA and noticed a …

END_OF_DOCUMENT_TOKEN_TO_BE_REPLACED 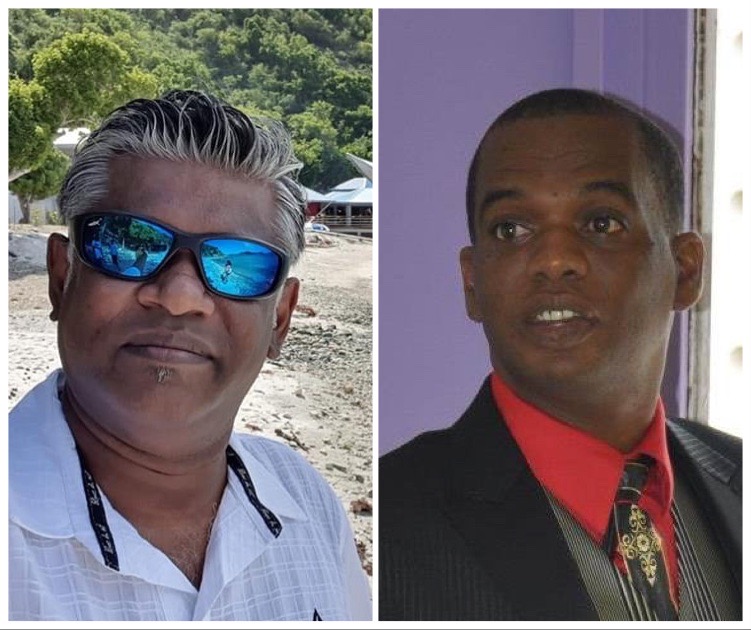 Hamlet Mark, right, and Sunil Ramjitsingh secured government communications contracts in 2019 totalling $176,000. Government has not provided details about their role, or explained why they were hired over Virgin Islands firms. (Photos: FACEBOOK)

Last September, Opposition Leader Marlon Penn told the House of Assembly about an “incident” that occurred during the 2019 budget process after he walked outside the HOA and noticed a stranger taking his photograph.

When he questioned the man, Mr. Penn said, a physical confrontation ensued that eventually was broken up by a media worker he knew.

“The man had planned to take my clothes off my body,” Mr. Penn quipped in the HOA on Sept. 29.

The opposition leader said he later learned that the photographer was Hamlet Mark, one of two communications consultants from abroad who were named on a list of 2019 contracts the government gave him following requests he made in the HOA.

Mr. Mark — a Grenadian media worker who reportedly advised the Virgin Islands Party before the February 2019 election — received a $98,000 government contract for a year of services starting four days after the election, the list states.

The other consultant — a Trinidadian named Sunil Ramjitsingh who Mr. Penn claimed attacked him on social media — is listed as receiving a $78,000 contract for communications services to the Premier’s Office between June 1, 2019 and May 31, 2020.

Mr. Penn said his attempts to get more information about the consultants — including repeated requests in the HOA for copies of their contracts — have been unsuccessful in spite of government promises to provide it.

The Beacon’s efforts since September to learn more about the consultants were similarly unsuccessful.

Premier Andrew Fahie said in a September HOA meeting that Mr. Mark no longer worked for government, but to date leaders have not explained why they hired him and Mr. Ramjitsingh instead of relying on the many communications professionals in Government Information Services or a local communications firm.

Mr. Penn said he initially learned of the contracts after requesting information in the HOA in 2019.

In June 2020, he followed up, asking Mr. Fahie to provide details of any new or renewed contracts with the Premier’s Office, the Ministry of Finance, the BVI Electricity Corporation, the BVI Ports Authority, the BVI Airports Authority, and the Telecommunications Regulatory Commission since his administration took office.

The opposition leader sought specifics about the contracts, including their duration, amounts and purpose. But although he had previously received the list of consultants, he didn’t receive copies of the contracts that he requested, he told the Beacon in October.

“I have the list of consultants from the premier,” wrote Mr. Penn, who provided a photograph of the list to the Beacon. “He never gave me the full set of documents even though I asked the question three times in the HOA.”

According to the list — which is labelled “Government Contract Registry 2019 (Petty)” — Mr. Mark received his $98,000 contract “to provide policy direction, external relations and communication services to assist the government throughout the strategic planning and execution of key initiatives.”

The list also states that Mr. Ramjitsingh received his $78,000 contract to “provide support to the Office of the Premier in research, policy analysis and communication strategy.”

Attempts to contact Messrs. Mark and Ramjitsingh through government and several social media sites were unsuccessful, though their accounts appear active.

When the Beacon contacted the premier to ask about the consultants, Mr. Fahie wrote on Dec. 14 that he would attempt to call to discuss the contracts. However, he never responded to subsequent requests.

Chief Information Office Desiree Smith said she did not have contact information for the two consultants, nor did she know of anyone who would be able to answer questions about their work or their contracts.

Both consultants, however, have a social media presence with some information about their professional experience.

Mr. Ramjitsingh’s Facebook profile indicates that he lives in Road Town and is from Trinidad and Tobago.

On LinkedIn, he labels himself as a “Senior Strategy Consultant: Research, Policy Analysis and Communications” for the VI Premier’s Office from June 2019 to “the present.” His LinkedIn profile also states that his duties in the position include preparing draft speeches, news releases and correspondences; assisting with research on public policy; making recommendations on legislative proposals and other policies; collaborating with stakeholders; and “other duties as necessary.”

Previously, according to the profile, Mr. Ramjitsingh worked from 2009 to 2019 as a “personal research assistant” to fellow Trinidadian Jack Warner, the former FIFA executive who has been battling extradition to the United States since he was indicted there in 2015 in connection with allegations of wire fraud, racketeering and money laundering.

His LinkedIn account lists him as managing director of West Park Global Media Inc. — which the Beacon was unable to contact — and he has run the Grenada-based Carib Update news service in the past.

He also has been the subject of controversy abroad.

In January 2016, he reported that he had been detained by police during an opposition-party protest in St. Vincent and the Grenadines but never charged.

He maintained that police had abused their power, but SVG Prime Minister Dr. Ralph Gonsalves described him as a “paid political operative” who sought to “demonise” a senior police officer, according to news reports at the time.

Mr. Mark has faced similar accusations here in the VI.

About five months after the 2019 general election, opposition member Mark Vanterpool criticised the government’s decision to hire him.

“His reputation in the Caribbean is not one of great repute,” Mr. Vanterpool said at the time, speaking outside the HOA building the day he was sworn in after a months-long dispute following his recanted resignation. “He ran into problems in St. Vincent and the Grenadines. [He] was hired by the Virgin Islands Party prior to the elections: no problem. But after the elections, I understand he may now have an almost $100,000 contract to advise the premier. … Nothing is wrong if he comes and advises, but let the people know who you are.”

Mr. Mark’s Facebook page appears to support Mr. Vanterpool’s claims about his work for the VIP. The day after the party swept to power in the Feb. 25, 2019 general election, Mr. Mark celebrated in a Facebook post.

“They may outspend you, but they could not outthink you; out-strategise you,” he wrote. “From one seat to eight, with only newcomers; turning around the impossible in just six weeks! This is the scene of one of the truly great electoral victories. Take a bow, Andrew A. Fahie — the big bomber.”

“Congratulations to you and your team, Ham!” one wrote. “Your genius imprints are again all over this. Take a bow for doing the impossible.”

About four years earlier, Mr. Mark posted a video of VIP candidate Sharie de Castro two weeks before the 2015 election. Eight days later, he posted photographs of Nanny Cay with the caption, “That’s what happens when you’re up too early, and the coffee shop ain’t even opened yet.”

Under that post, another user commented, “Oh nice, elections!”

The VIP lost that election to the National Democratic Party.

When Mr. Penn complained last September about the alleged online attacks by Mr. Ramjitsingh, he said he was concerned to see an individual “emboldened” enough to “go after a sitting member of Parliament” while being paid by government.

“Is this where we’re heading: Persons being financed through the public purse with that type of behaviour in our territory?” Mr. Penn asked at the time. “That’s the level of infiltration that we’re looking at?”

He also said that he initially intended to drop the issue considering it happened about a year earlier, but added, “If you don’t chop off the toe, you get gangrene, and it starts to spread until you lose the whole foot.”

Later, Mr. Penn criticised government during a Dec. 14 HOA sitting for bringing in people from outside the territory on “very healthy consulting engagements.”

He added that $8 million had recently been budgeted for consultancies. “We have consultants on the ground from all walks of life from all over the place,” he said.

Mr. Penn did not respond to a Tuesday message asking whether he had received the full set of documents since October, but opposition members have not carried out their typical question-and-answer segment of HOA since September.