Local News > Government ‘on the way’ to loan guarantee

Government ‘on the way’ to loan guarantee

After weeks of criticising the United Kingdom’s conditions for a recovery loan guarantee, Premier Andrew Fahie returned from a visit to London and said this week that his government is …

END_OF_DOCUMENT_TOKEN_TO_BE_REPLACED 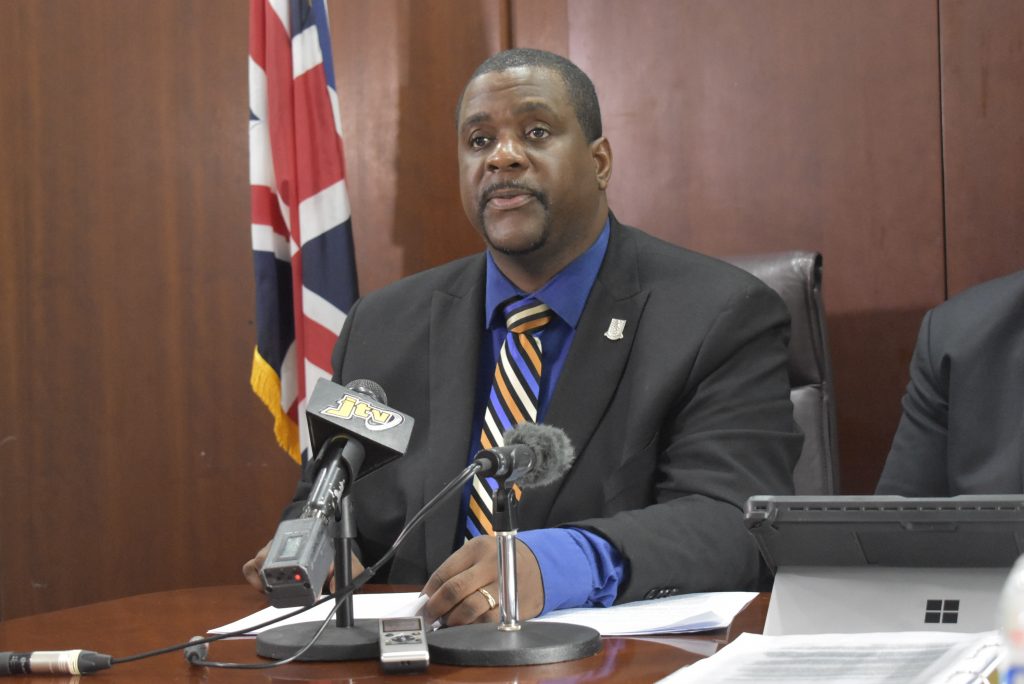 Premier Andrew Fahie hosted a press conference following his return from the United Kingdom, where he said he “renegotiated” the conditions of a £300 million loan guarantee for the recovery. (Photo: ZARRIN TASNIM AHMED)

After weeks of criticising the United Kingdom’s conditions for a recovery loan guarantee, Premier Andrew Fahie returned from a visit to London and said this week that his government is working toward a “renegotiated” version of the proposal, which would allow the territory to borrow up to £300 million at low interest rates.

The premier hosted a press conference on Tuesday afternoon, announcing that the government will submit a plan of action to the UK by Sept. 27 that includes Mr. Fahie’s requests.

With specific terms of the guarantee still in the air — including matters concerning borrowing ratios outlined in the 2012 Protocols for Effective Financial Management — the government is staying in close contact with the UK to come to an agreement, the premier said. A steering committee, which he said currently consists of Virgin Islands technical experts, has been assembled for direct communication with the UK.

Yesterday, however, Opposition Leader Marlon Penn questioned whether the premier had provided any evidence of substantive changes to the terms negotiated by the previous government, which was in talks with the UK for more than a year before losing power in the February election.

“I heard a lot of fluff talk but no specifics,” Mr. Penn (R-D3) wrote the Beacon. “The premier has a responsibility to be clear, concise, and forthright with the people.”

Mr. Fahie said he asked the UK to discuss the conditions in July and that he and his government brought 10 objectives to the table during the course of eight meetings with UK officials, including Foreign and Commonwealth Office Director of Overseas Territories Ben Merrick and OT Minister Lord Tariq Ahmad.

“I am happy to report that our visit to the UK was a resounding success,” he said. “The discussions were cordial, productive and con- ducted in an atmosphere of mutual respect. All parties were able to arrive at common ground.”

Of the more than 30 requirements of the loan guarantee, the current administration has taken issue with only two areas: the government’s inability to access recovery funding that is to be administered by the Recovery and Development Agency; and the fact that taking out loans under the arrangement could cause the territory to exceed the borrowing ratios outlined in the Protocols, Health and Social Development Minister Carvin Malone explained at the press conference.

In a letter outlining the purpose of the visit, the government argued that the borrowing ratios in the Protocols do not sufficiently consider the impact of natural disasters that could put the territory in an unforeseen and vulnerable position. Mr. Fahie reported that the UK government has agreed to consider referencing such situations in the debt section of the Protocols, and added that the UK would work with the VI to come back into compliance if the loan guarantee causes the VI to exceed the ratios.

Though Mr. Fahie cast this concession as new, the UK addressed the same issue in a letter to former Premier Dr. Orlando Smith last year.

Mr. Merrick stated in the Aug. 21, 2018 letter, which was released to the public last month at his request following Mr. Fahie’s criticism of the loan guarantee, that the VI and UK governments “will need to agree amendments to the Protocols for Effective Financial Management given the new borrowing will likely cause the BVI government to remain out of compliance with the existing borrowing ratios.”

The letter also stated, “A date to return to compliance will need to be mutually agreed alongside interim targets and measures on public financial management in line with the High Level Framework for UK Support to BVI Hurricane Recovery.”

Recovery and development, he added, should be considered separately. This idea, he said, was well received by the UK government, which agreed to consider allowing the government to administer other sources of funding for investment besides those borrowed under the loan guarantee.

Asked how much money is currently in the Recovery Trust and who the trust manager is, Mr. Fahie did not answer directly. He did, however, say broadly where the money came from.

“All money inside the trust would have come from the government,” Mr. Fahie said. “The UK put in some money to help with the administration and so did the BVI government.”

Mr. Malone interjected to add that money also came from other donations.

The government will soon submit its proposal to the UK, including how it wants borrowing ratios calculated. The proposal will suggest adding measures to the Protocols allowing for “interim” ratios, which would be agreed by the VI and the UK, to last over a set period of time, especially in the case of rebuilding after a catastrophic event, according to the premier.

Since the territory is vulnerable to devastating storms each year, the possibility of having to rebuild needs to be directly addressed within the Protocols, Mr. Fahie said. When the agreement was signed in 2012, it did not take this factor into consideration.

Mr. Fahie stressed his view that the Protocols need simple and direct wording concerning the “interim” borrowing ratios and asked that they be spelled out in “black and white” so they will be clear in the future.

Another major push from the government is to ensure that “procurement for projects to rebuild and develop the BVI do not exclude” local businesses, Mr. Fahie said.

Mr. Malone admitted that most of the UK’s conditions for the loan guarantee are sound and would not have been necessary had measures been taken in the past to ensure good governance in the territory. Mr. Fahie expressed his dissatisfaction with what he called some of the “loudest voices” in the recent discussions surrounding the loan guarantee. Some of his critics, he said, “were at the centre of the unfortunate circumstances that led to very stringent conditions being imposed on the BVI between 2012 and 2017.”

The previous government, he added, breached the Protocols that its leaders had signed.

“Now, two years later, like Rip van Winkle, they have awoken, and are trying to pressure your new six-months-old government to ‘hurry up; ask no questions; do not look out for the best interest of the people of the Virgin Islands and just take the money and get on with the recovery,’” he added.

Mr. Penn urged the premier to “move on from the campaign speeches” and “start to govern.”

“Get on with the recovery of the Virgin Islands and the economy,” the opposition leader said yesterday, adding that the territory needs to see a plan.