In response to a request at a recent press conference, government officials last week provided — and then partially retracted — a spreadsheet listing limited information about more than $16 …

END_OF_DOCUMENT_TOKEN_TO_BE_REPLACED 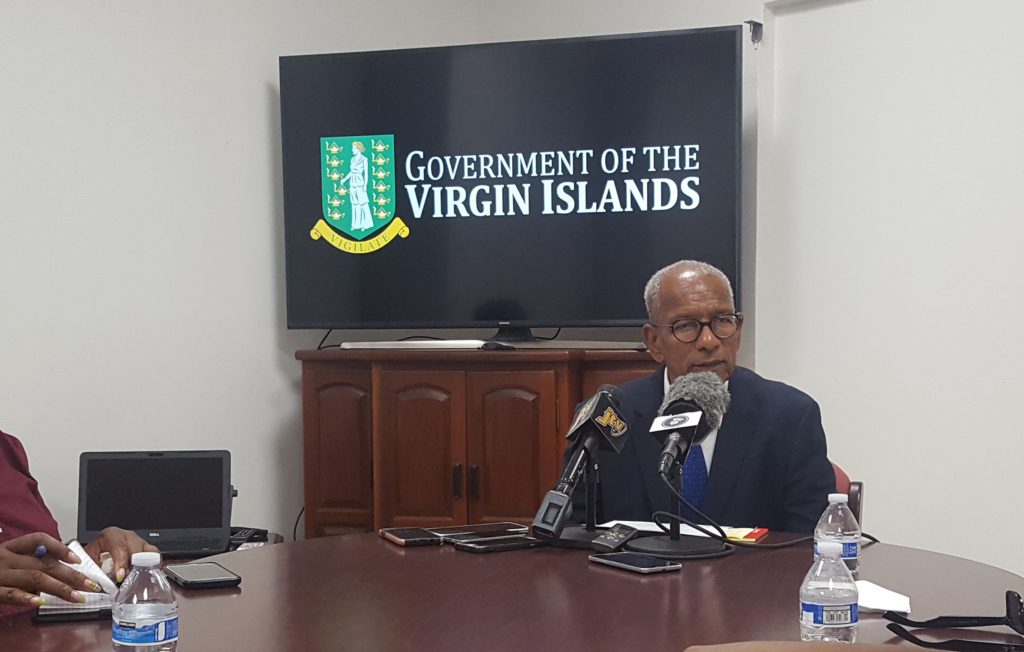 During an Oct. 1 press conference, above, Premier Dr. Orlando Smith was asked about relief received by government in the aftermath of Hurricane Irma. (Photo: CONOR KING DEVITT)

In response to a request at a recent press conference, government officials last week provided — and then partially retracted — a spreadsheet listing limited information about more than $16 million worth of donations that government received after Hurricane Irma.

Officials did not immediately answer the Beacon’s requests for more information, including basic details about how the donations were used, but they promised that explanations would be forthcoming at a press conference next Tuesday.

The spreadsheet (which is included in a redacted form at the end of this article) lists 199 separate donations, as well as donor name and donation “type” and value, but some of that information appears to be missing. A column listing the dollar value of 47 donations, for example, lists “0” for 152 others, and no date is provided for 122 of the entries.

The list also does not specify how exactly donations were used in most cases, though it appears to list the government agency that received each one and the surname of a senior official in that agency.

Almost 50 donations were reportedly given to the Ministry of Education and Culture, for example, though the only description provided about where they were allocated is “schools.”

Chief Information Officer Desiree Smith e-mailed the list of donations to members of the media on Oct. 2 after a reporter for the news website BVI Platinum asked for “the figures in terms of hurricane relief ” during a press conference the previous day with Premier Dr. Orlando Smith.

Ms. Smith did not provide further context to the list in her initial e-mail, which included a forwarded message from Premier’s Office Information Officer Bria Smith that described the document as a “hurricane relief excel document.” The e-mail did not say if the list included all donations given to government after the storm.

According to the document, private individuals, companies, non-profits and other governments have given donations worth about $16.12 million to the Virgin Islands government since Irma. About $6.2 million of that was described as “money,” while the rest was described with the terms “materials,” “vehicles,” “equipment,” “food,” “water,” “clothing” or “human.”

It’s unclear, however, how most of those donations have been used.

Ms. Smith, the chief information officer, did not provide comment on questions from the Beacon, and Financial Secretary Glenroy Forbes did not respond to e-mails.

After the Beacon’s request for more information, however, Ms. Smith sent another e-mail to the media on Tuesday stating that the Excel document “contains sensitive information i.e. donor names.”

“As such, we ask that the information submitted be treated as such by way of omitting the names of any donors or any other persons who have been revealed in the document when publishing any communique for public consumption,” she stated.

“Therefore, in an effort to prevent the possibility of legal repercussions, we ask that the media be cognizant and mindful of the sensitive information when publishing.”

She added that the spreadsheet is a “working document” that “is constantly being updated,” and promised more information in the coming weeks. The statement added that a press conference has been scheduled for next Tuesday to discuss the donations.

“At this briefing, it is expected that questions and concerns will be addressed and answered,” she wrote.

Otherwise, some of the largest donations (out of those that were assigned a value) were $540,000 from Flow, $1 million from Unite BVI, and $1 million from businessman Peter Haycraft — all of which were recorded as monetary donations given to “schools.”

Some of these donations have been reported separately by the Beacon and other news outlets over the past year, though it’s uncertain if they are the same programmes and projects that government is referring to in the recently released list. For example, Mr. Haycraft, the founder of Road Town Wholesale, promised to fund the construction of a new Enis Adams Primary School, and Flow and Unite BVI have committed to rebuilding the Bregado Flax Educational Centre on Virgin Gorda.

Other donations on the list that may not have been previously announced are less well defined.

A “Mr. Cooper” is listed as giving a “human” donation to the BVI Health Services Authority, but the document does not specify when or provide any other clarifying details. Farther down, “Cooper” is recorded as giving “materials” to DDM, but no date is listed.

Among the monetary donations with a listed value of zero dollars were contributions from Convoy of Hope, BVI Asia House, Rotary, and Enrique Veglio, who is described as the director of operations at Kingfisher Air Services.