Legislators have often discussed the financial hardship caused by the Covid-19 pandemic, but they hashed out some of the details during last week’s House of Assembly sitting. The territory was …

END_OF_DOCUMENT_TOKEN_TO_BE_REPLACED 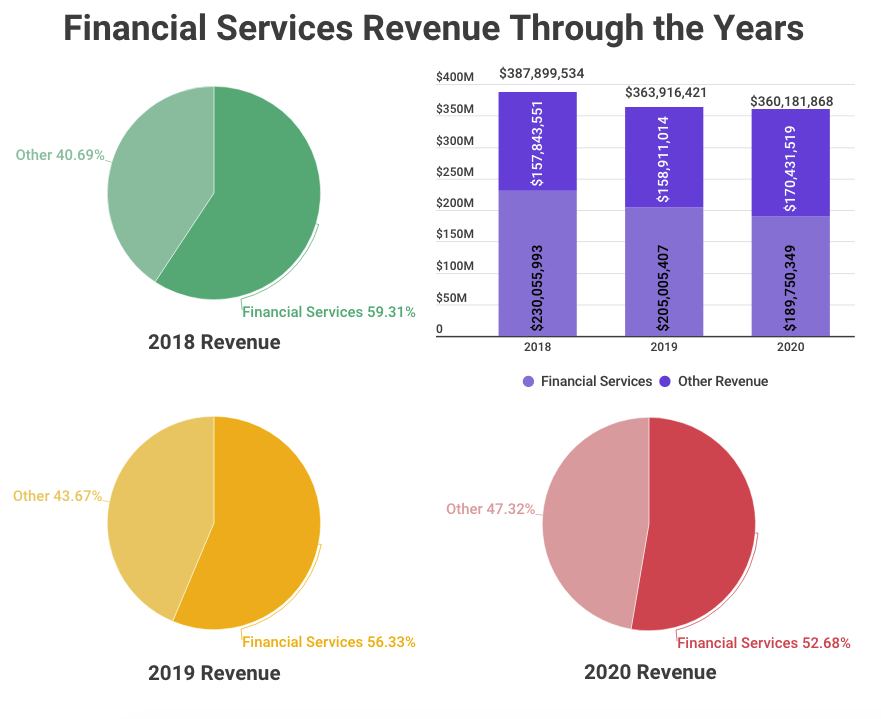 While answering questions about the pandemic’s effects on the territory’s finances last week in the House of Assembly, Premier Andrew Fahie noted that financial services revenue in 2020 was less than $190 million, down from the previous two years. It also made up a smaller percentage of the territory’s overall revenue last year, at less than 53 percent. (Graphic: DANA KAMPA)

Legislators have often discussed the financial hardship caused by the Covid-19 pandemic, but they hashed out some of the details during last week’s House of Assembly sitting.

The territory was about $30 million in the red when comparing its revenue and expenditure last year, and so government dipped into its financial reserves to balance the 2020 budget, according to information provided by Premier Andrew Fahie in response to questions from Opposition Leader Marlon Penn. 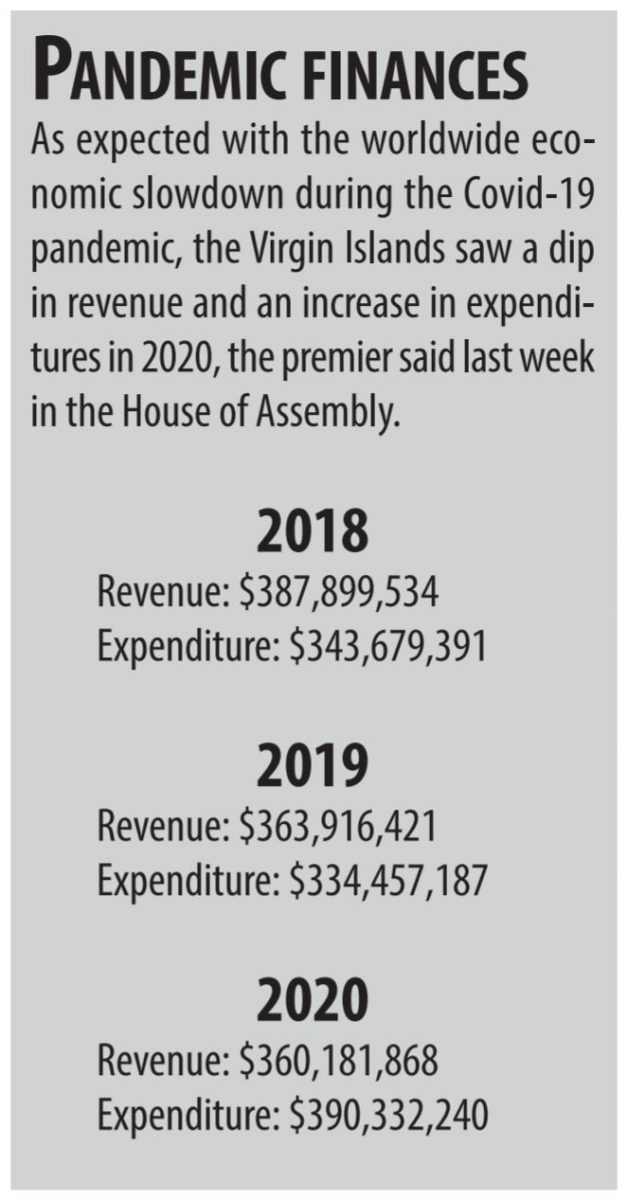 Mr. Penn asked on March 10 for the government’s total revenue and expenditures for the past three years.

The audited total revenue for the 2020 calendar year was about $360 million, the premier said, while expenditures were about $390 million — a shortfall of some $30 million.

For comparison, revenue was nearly $388 million in 2018 compared to expenditures of almost $344 million, while the corresponding numbers in 2019 were about $364 million and $334 million, according to Mr. Fahie.

In spite of the shortfall last year, the premier said the territory had received some unexpected revenue from stamp duty — which he declined to explain further — and had weathered the pandemic relatively well compared to other areas in the Caribbean.

“We have to continue to be innovative on how to increase revenues, how to control expenditures, and how to move forward,” he said.

Mr. Fahie said government balanced the budget last year with $7 million from the reserve fund, $5,927,007 from the contingency fund, $11,878,317 from the Caribbean Development Bank Rehabilitation and Reconstruction Loan, and $5,345,048 from the consolidated fund.

Asked how the CDB loan factored into the budget considering that it’s money that had already been secured, Mr. Fahie said, “We always count the loan as an expenditure. So if we don’t use that part of the loan, it balances out as a savings in that we didn’t have to use it.”

Without taking those measures to balance the budget, the territory would have ended up at a $30 million deficit, he explained.

“This year, we are making sure that we pay particular attention to the recurrent expenditures to make sure that we don’t have to dip back into those funds, unless … necessary,” Mr. Fahie said.

The premier also noted that the Social Security Board provided a $40 million grant for economic stimulus measures last year, $10 million of which was used within the SSB to pay unemployment benefits and $7.5 million of which went to unpaid bills at National Health Insurance.

The opposition leader also asked how big a role financial services played in the territory’s revenue and expenditures over the past three years.

The premier responded that even though revenue from the sector declined steadily from 2018 to 2020 it continued to surpass revised projected estimates during those years despite hurricanes Irma and Maria and the pandemic.

Mr. Penn asked how non-financial-services revenue could have increased last year, and Mr. Fahie responded that government implemented other money-making measures, but he did not go into further detail.

“We continue to push some significant initiatives, whether it be through construction, through different areas,” he said. 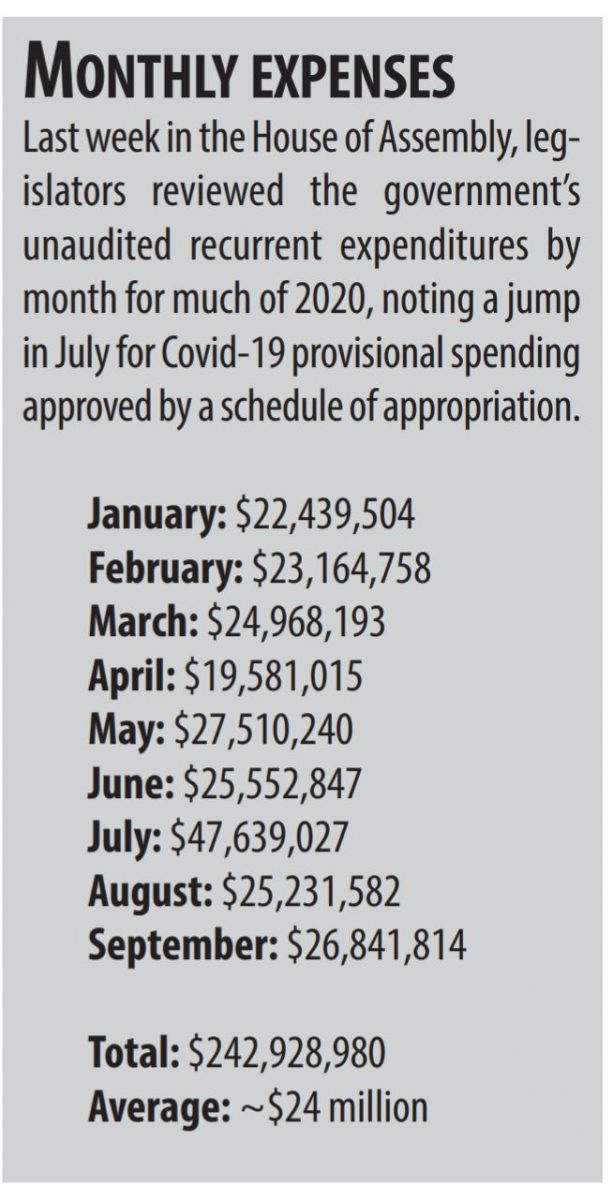 But Mr. Penn was sceptical. Considering that the territory shut its borders to tourists from March through December and many businesses closed for long periods, Mr. Penn said he found it “virtually impossible” that revenue outside of financial services actually increased significantly in 2020.

Mr. Fahie responded, “If you look at in isolation like that, yes, but without going into details — so that those can be furnished at another time — we did have some unexpected sales in natural resources and labour that came up with some stamp duty.

He did not offer further details about the stamp duty or the last-minute initiatives, but said he was “grateful” for them.

Mr. Penn said he failed to see how government found the money.

“You’re saying that between that period [of the border closure], we were able to get $12 million additional in other revenue measures? I don’t know what they were.

“I’ll be back with a subsequent question to get the details of these specific measures that makes up the original $170 million. I can’t see it.”

Mr. Fahie answered, “Well, you can’t see it because I didn’t give it to you to see. When you ask the question what brought the excess revenue, … we will bring what make up the 170 so that you can see.”

The premier also acknowledged that tourism revenue was down, but said “other revenue makers” and outstanding 2019 funds that were recently collected also made a difference.

Mr. Penn also asked what is being done to create additional opportunities in financial services at a time when the territory is facing concern about new beneficial ownership regulations and blacklisting threats.

“There are many ways that we’re looking to diversify the economy, even to diversify existing industries and to create linkage industries,” Mr. Fahie replied.

He added that government is exploring revenue opportunities through the VI Shipping Registry and economic substance regulations.

Mr. Penn also asked about the government’s bank accounts balance as of March 1, 2019.