Government working to fire up incinerator

Fires have been burning at Pockwood Pond over the past week, some intentional and some not. The incinerator was fired up again on Friday after more than a year, and …

END_OF_DOCUMENT_TOKEN_TO_BE_REPLACED 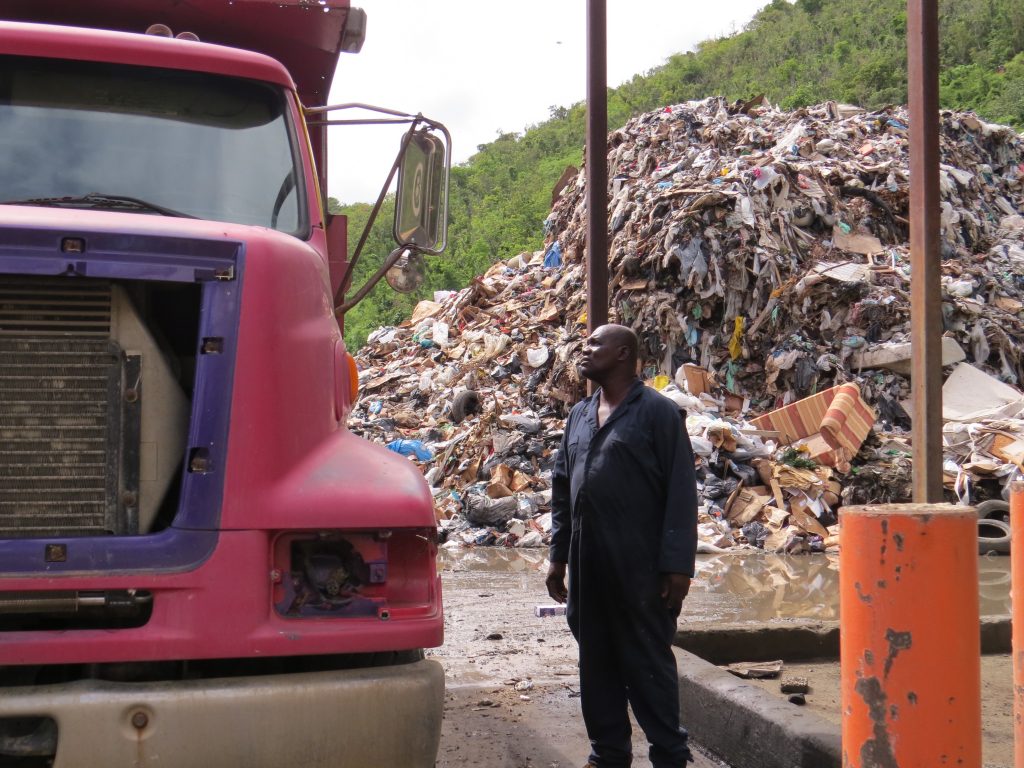 Clifton Bryan, who has worked at the Pockwood Pond incinerator for 24 years, checks in with the driver of a dump truck. Mr. Bryan said the Department of Waste Management hopes to reduce the number of accidental fires up the hill as the incinerator comes to full capacity. (Photo: DANA KAMPA)

Fires have been burning at Pockwood Pond over the past week, some intentional and some not.

The incinerator was fired up again on Friday after more than a year, and although mechanical problems were still being addressed this week, government officials hope the facility will soon help reduce the number of accidental fires at nearby garbage piles.

On Friday, smoke from one such fire carried far enough to draw complaints from St. John, just as employees were getting ready to start the incinerator for the first time since it was damaged by a fire in November 2018.

Trash has been landfilled on the hill above the incinerator since then, and garbage piles often spontaneously combusted, sending smoke across much of Tortola’s west end.

Now, leaders are lauding the arrival of a key piece of equipment, a replacement control panel they say will allow the facility to function.

“After witnessing the terrible smoke from the Pockwood Pond dump site on Thursday night and all day Friday, the premier and the entire members of government are overjoyed with the news of a functional incinerator,” Deputy Premier Carvin Malone wrote in a Facebook post late Friday afternoon.

Mr. Malone, who is also the minister of health and social development, said in an interview on Monday that Consutech Systems LLC — the Virginia-based company that manufactured the incinerator — had sent an engineer to certify the electrical installation of the control panel and make sure the process went smoothly.

“We were able last Friday to start the incinerator [for the first time] since installation,” Mr. Malone said. “We’re going through some, you know, mechanical checks just to make sure that any broken pipes, any leaking pipes are actually repaired. Some of that was done on Sunday. So we were able to get the process started, and we will be continuing that process barring no other mechanical issues.”

As the incinerator gets back on stream, Mr. Malone said less solid waste will be buried, meaning there will likely be far fewer occurrences of spontaneous combustion.

He added that it took a while for government to get the right approvals to rebuild the facility after the fire, and then Consutech had to manufacture the panel.

“It has been fully running since Friday, but it’s down to just testing a few water leaks,” Mr. Malone said, though employees anticipated it wouldn’t be up to capacity until today. “It’s been down for a full year plus. We now have it up rolling and running.”

Mr. Malone thanked residents for dealing with the effects of the accidental fires.

“We appreciate the patience that they have displayed throughout this particular process,” he said. “We really apologise for the inconvenience caused as a result of the excessive smoke that they had to endure. We had done all that we could in terms of making it as comfortable as possible, but the only thing that was going to greatly reduce it was getting the incinerator up and working.”

There was a sharp decline in air quality on Tortola’s west end following the latest fire at the garbage pile last week, according to PurpleAir, an air-quality monitoring network that maintains an online record of the airborne particulate matter picked up by sensors installed by customers in countries around the world.

Late Saturday, sensors at Romney Park in West End recorded an air quality index value of 321. For values above 300, the EPA advises “health warnings of emergency conditions if [people] are exposed for 24 hours,” adding, “the entire population is more likely to be affected” at this range.

Sensors at Long Bay, West End also recorded values as high as 175 on Monday evening. At those values, anyone in the area could begin to experience health effects if exposed for 24 hours, and sensitive groups such as the young or elderly may see more serious health effects, according to the EPA. Neither sensor recorded high values for an extended period of time.

West End residents, however, have complained about toxic smoke from accidental fires since long before the incinerator stopped working. Their concerns were exacerbated when the build-up of trash at the Coxheath dumpsite following Hurricane Irma caused fires that smouldered for about four months in mid 2018.

During his First District speech on Jan. 11 at Cappoons Bay, Premier Andrew Fahie announced with excitement that the control panel would be fully functional within two weeks from that day.

After running several tests this weekend, employees at the Department of Waste Management said yesterday that they hoped to be running the incinerator in 12-hour shifts by the end of the week, and in 24- hour shifts in the near future.

More than 20 people currently work at the incinerator, which functions through a three-step process that allows crews to add new garbage every seven minutes while previous loads continue burning down to ash.

Clifton Bryan, who has worked at the facility for 24 years, demonstrated how heavy metal doors open to allow in more trash while protecting workers from the intense heat inside. Cisterns provide the water needed to cool the incinerator, and crews have been checking all the pipes and pressure to ensure everything is working properly after being down for an extended period of time.

Given the rate at which crews can feed the incinerator during the facility’s operational hours, Mr. Bryan anticipated it will take approximately two months to process the piles currently located outside the doors.

The control panel is not the only piece of equipment at Pockwood Pond that has been long awaited.

For more than a decade, politicians have been promising to install a pollution-control scrubber, which would filter potentially harmful particulates from the incinerator’s smoke. Of particular concern are the high levels of airborne chemicals, including dioxins that can cause reproductive and developmental problems.

In 2015, government signed a $1 million contract with Consutech for the scrubber. Government paid a $500,000 deposit, but no substantive progress has been reported since then.

As of Monday, components of the scrubber including large pipes were sitting outside the building where the incinerator is located.

Mr. Malone said during an October meeting at the House of Assembly that the scrubber would be in place in the first quarter of this this year, though he offered no further updates in meetings since.

Members of the opposition said during a press conference last Thursday that they were disappointed it took so long to get the incinerator working again.

“I know people have been clamouring for this issue to be addressed,” Opposition Leader Marlon Penn said. “The issue of open burning is a serious issue for us. The entire issue of waste management is a major issue for this territory.”

Opposition member Julian Fraser said it is “unacceptable” that it has taken so long to get the incinerator running again while fires continue to break out.

there are in the territory,” Mr. Fraser said. “As far as the incinerator is concerned, November 2018 is the date that the incinerator went down. To have it out of commission to this day is unacceptable.”

He also expressed concerns for the long-term health effects on residents living near the facility who are breathing the smoke.

“The burning of garbage in the open in a community right here in the BVI, and people in St. John and St. Thomas are complaining about it — imagine what is happening to people in that community,” he said.

In an apparent jab at Mr. Penn’s National Democratic Party, Mr. Fraser said his criticism extends to those who were in leadership positions when the incinerator fire occurred.

“It is time for our citizens to start filing class-action lawsuits against the government, something that I support and will support even if I have to help support it financially,” Mr. Fraser said.

Mr. Penn said the government and community members should work together to find a comprehensive solution for waste management.

“We as the opposition have to make sure we agitate for the people of this territory,” he said.