High demands. Limited resources. Declined revenue streams. Premier Andrew Fahie said that these problems have been slowing the government’s recovery from Hurricane Irma as the territory rings in the fourth …

END_OF_DOCUMENT_TOKEN_TO_BE_REPLACED 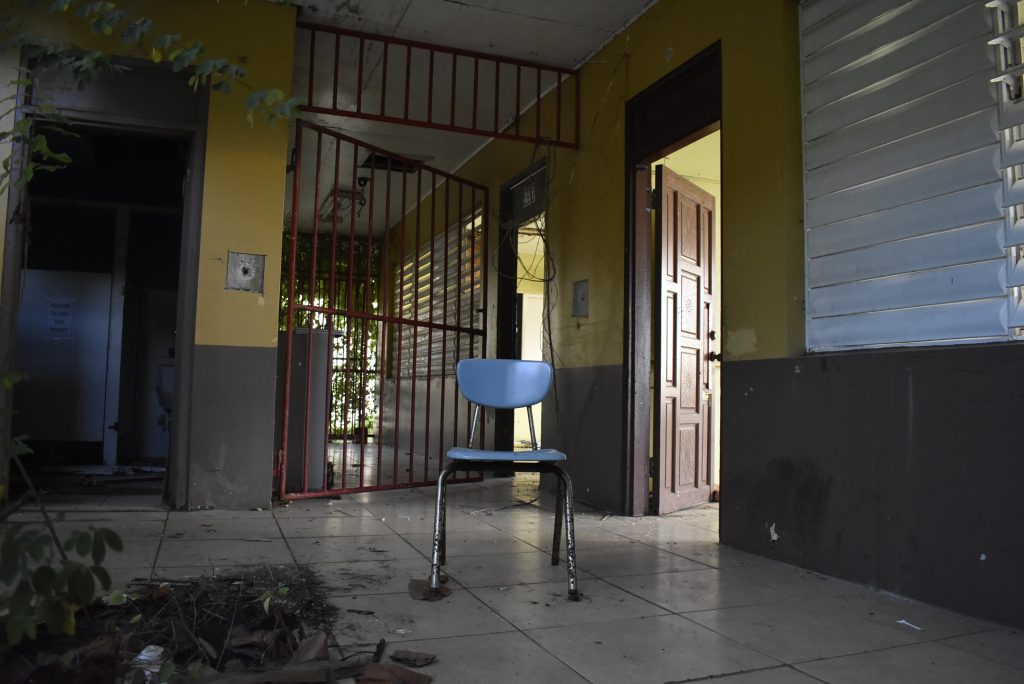 Premier Andrew Fahie said that these problems have been slowing the government’s recovery from Hurricane Irma as the territory rings in the fourth anniversary of the storm.

“We have had a lot of challenges, but we have signed up for it,” Mr. Fahie said during a Aug. 27 press conference. “There’s still plenty more to be done.”

He didn’t, however, address the government’s continued refusal to take up a recovery loan guarantee from the United Kingdom worth as much as $400 million.

Nor did he explain an alternative plan to fund the hundreds of millions of dollars in recovery work that may still be needed to complete projects such as the West End ferry terminal, the Elmore Stoutt High School, a new incinerator, public libraries and museums, a new court complex, sewerage work, and others.

In recent months, Mr. Fahie and other leaders have worked to put a positive face on the hurricane recovery, touting ongoing work on roads, water infrastructure, and various smaller efforts as an economic stimulus helping to counter the pandemic. But many larger projects remain stalled, and it is unclear when work will be completed — or, in many cases, when it will start.

The cost of the recovery initially was estimated at $721 million, and the government’s original 2018 recovery plan put a $581 million price tag on projects to be administered by the Recovery and Development Agency, which was established the same year to oversee the bulk of the effort. Last year the new government downsized that recovery plan, estimating its new cost at $186.9 million over four years.

But even that greatly reduced price tag is still a long way away: So far the RDA has reported signing only $28.3 million worth of contracts, including 16 over the past year totalling a little more than $7 million.

And while the central government has also overseen other recovery efforts since Irma, it appears still to be facing a major funding shortfall at a time when the pandemic has put considerable new stress on its coffers.

The bulk of the recovery funding so far has come from the $65 million Caribbean Development Bank Rehabilitation and Reconstruction Loan that government sourced shortly after Irma.

But much of that loan is now exhausted, and no comprehensive funding plan has been put forward.

Meanwhile, ESHS students and others are still attending classes in temporary facilities; there is no public library in Road Town; most community centres are not fully repaired; the Isabella Morris Primary School remains closed, and other schools are still damaged; derelict boats litter territorial waters; and work has been delayed on major recovery projects like the West End ferry terminal, the NEOC, a new incinerator and scrubber, a new court complex, the Ralph T. O’Neal Administration Complex, sewerage work, and others.

Last year, the premier blamed the previous government for the delays, and this year he pointed to the pandemic.

“The infrastructure of the territory has not been upgraded as much as it should have been over the years,” he said Friday. “It’s just our luck that we came into a time where you’re in the wake of Irma and you go right into Covid.”

As in the past three years around the time of the Irma anniversary, RDA officials said they would meet with the Beacon only if the Premier’s Office agreed to a joint interview. But efforts to secure an interview with the office were unsuccessful for the third year in a row.

In 2018, the House of Assembly — with the support of Mr. Fahie, who was on the opposition at the time — voted to set up the RDA as part of requirements to access the UK loan guarantee, which would have allowed the territory to borrow up to $400 million with low-interest rates.

The then-government sub-sequently entered into negotiations with the UK about the terms of the guarantee, but didn’t accept it.

After becoming premier in early 2019, Mr. Fahie took over those negotiations, but publicly complained about the requirements associated with the offer.

His government also tossed out the 116-page Recovery to Development Plan 2018, which listed specific endeavors costing some $580 million over seven to ten years.

The premier — who voted for the original plan when it was passed in the HOA in October 2018 — now called it “too bulky” and said it would put an “undue financial burden” on the territory. He also claimed that the original plan would steer the bulk of opportunities to people outside the VI, even though it gave priority to local companies.

Instead, his government adopted a 33-page plan outlining a four-year strategy with financing needs estimated at $186.9 million.

The new plan, which was riddled with typographical errors and contained few details on projects or their timelines, was passed in the HOA in June 2020.

At the time, Mr. Fahie said the document had been sent to the UK and that negotiations for the loan guarantee were still ongoing. Since then, however, he has not provided a definitive update about whether or not his government still hopes to access the UK offer.

Though many major recovery projects have stalled in the meantime, smaller scale efforts have been helping to provide an economic boost during the pandemic. Some have been overseen by the RDA, including more than $6 million spent on roads and reservoir systems in recent months.

Others are being overseen by the government, such as the Ralph T. O’Neal Administration Complex, where both wings are being gutted and refurbished in a project funded in part by an insurance payout.

Meanwhile, repairs to administration buildings on Virgin Gorda and Jost Van Dyke have been completed, and the Anegada Administration Building was nearly complete as of June, the RDA reported at the time.

After more than three years of delays, the Virgin Islands Fire and Rescue Services inked a $332,206 contract with Metro Construction LLC to renovate the ground floor of the station in March, though the agency hasn’t announced the completion of the project yet.

Last November, government also accepted a $450,000 grant from the UK to help repair the Police Marine Base while contributing $1.6 million from its coffers.

A new National Emergency Operations Centre also is scheduled to be built by mid-2022, officials said in February at a $9.8 million contract signing that was followed by the start of demolition work. The project is to be funded by the CDB loan, officials said at the time. 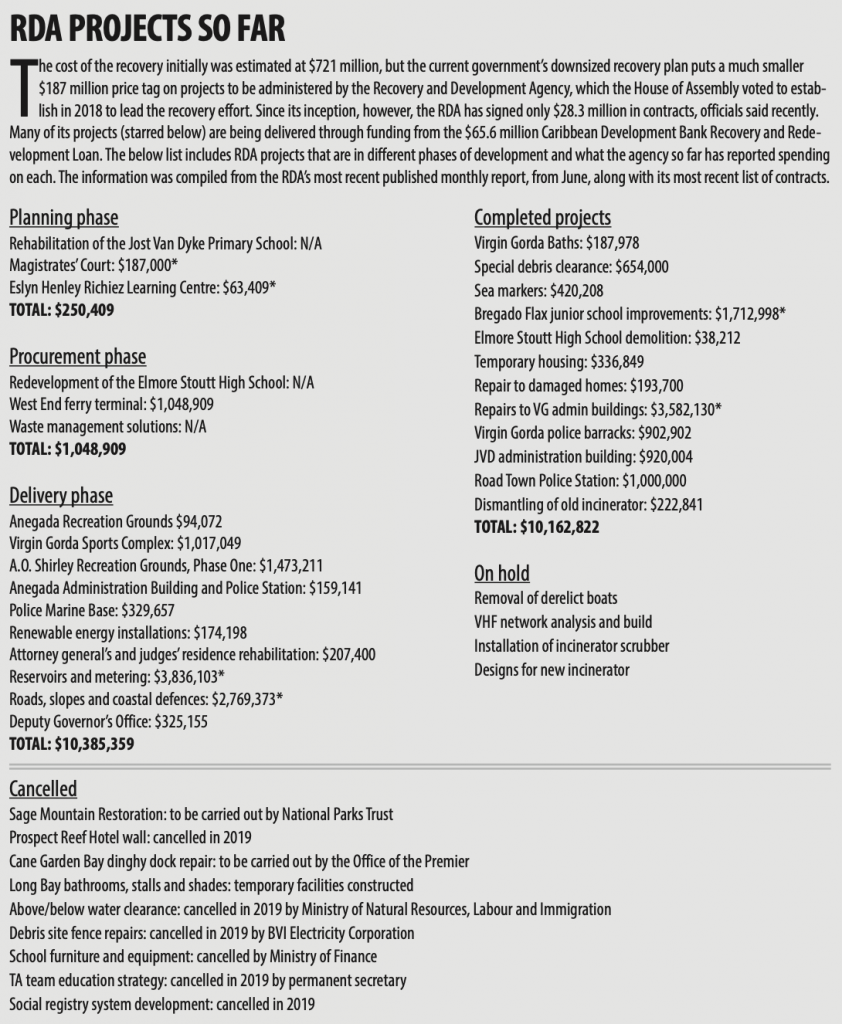