Long-simmering tensions between Premier Andrew Fahie and Governor Gus Jaspert sparked anew last Friday when Mr. Jaspert defied the premier’s wishes and announced that he had enlisted a British naval …

END_OF_DOCUMENT_TOKEN_TO_BE_REPLACED 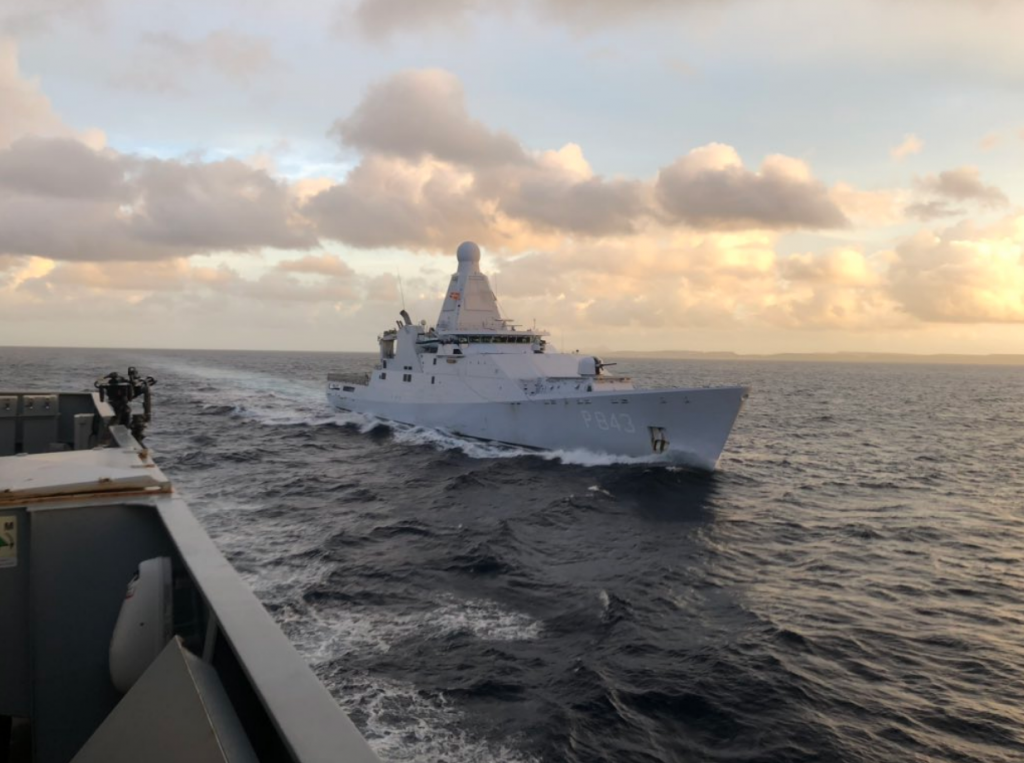 Governor Gus Jaspert announced last Friday that the United Kingdom is sending the Royal Navy patrol ship HMS Medway to help secure the borders at no cost to the territory. The ship recently seized more than $100 million worth of cocaine in a drug bust in the Caribbean Sea. Premier Andrew Fahie reacted angrily to the government. (Photo: ROYAL NAVY TWITTER)

Mr. Jaspert said the vessel, designed for counter-piracy, anti-smuggling, and fishery protection, will work with the territory’s new border control Joint Task Force through the end of October.

“To tackle the immediate threats to our border security, I am pleased to announce that HMS Medway will shortly return to our waters to offer additional support with surveillance and act as a deterrent,” Mr. Jaspert stated, adding, “As I have stated in many discussions, security is crucial to our Covid-19 response. If we can stop new cases from entering BVI illegally, we can control this virus and keep case numbers down.”

The governor said the ship’s activities in Virgin Islands water will be funded entirely by the UK, and none of the crewmembers will come ashore or make contact with VI officers.

But on Tuesday, 284 Media published a letter that Mr. Fahie wrote Friday to Baroness Liz Sugg, the UK’s minister for overseas territories and sustainable development, in which he blasted Mr. Jaspert’s latest move as an affront to the people and government of the Virgin Islands.

“Yet again, your governor has deliberately made public statements that serve to undermine the relationship between the BVI public and their democratically elected government through dangerously misleading misinformation,” Mr. Fahie wrote to Ms. Sugg.

When this reporter asked Mr. Fahie for a copy of the letter in a Tuesday WhatsApp message, the premier replied, “That was a letterwritten directly to Baroness Sugg, so I am amazed that someone leaked it out in the public domain.”

In his letter, however, Mr. Fahie also stated that he had copied “all elected legislators in the Virgin Islands so that they may be aware of the tyranny that is unfolding through Governor Jaspert on behalf of the British Empire.”

Mr. Fahie did not respond to further questions.

Though Mr. Fahie did concede that there is a role for the UK military to play in helping protect the VI’s borders, he told Ms. Sugg its assistance should be “limited to certain functions … because of the desire to develop our domestic capabilities.”

For this reason, he said, he had asked the governor to request that the UK advise the territory on what equipment should be procured for a permanent border surveillance system, and on how to install that technology.

“No request was made for the UK to co-fund or to donate any funds to the procurement of the permanent border surveillance system,” Mr. Fahie explained.

Nevertheless, Mr. Jaspert presented an offer to pay half the cost of the system to the tune of about $300,000, according to the premier, who bridled at the offer.

Mr. Fahie, in turn, suggested that this payment instead be allocated to “other areas of need,” such as providing “equipment and vessels” for police and customs officers, he wrote.

“It was made very clear to the governor that the BVI being able to purchase a border protection system on its own would be a tremendous accomplishment for Virgin Islanders and would inspire them to recognise their ability and to have confidence in themselves,” he added.

Mr. Fahie also accused the governor of casting the VI, in his correspondences with the UK, as a hapless territory unable to get a grip on the coronavirus pandemic.

“To suggest that the UK military and government must swoop in and rescue the BVI people is highly insulting, considering that neither the BVI’s border protection nor our public health situations are out of control,” Mr. Fahie said.

In his letter, the premier also alleged that during a Friday meeting of the National Security Council, the governor read a statement where he exaggerated the severity of the pandemic in the VI in order to justify requesting help from the UK.

“When asked to amend his NSC paper to more accurately reflect the state of the territory’s affairs and needs, and to keep the UK involvement within the scope of what was requested, Governor Jaspert was adamant that he would not,” Mr. Fahie wrote.

“The meeting ended with the NSC not agreeing to the structure of governor’s paper following an extended session in which Governor Jaspert’s demeanour became quite aggressive.”

This is not the first time Messrs. Fahie and Jaspert have clashed over the UK’s involvement in shoring up the territory’s borders.

In a statement on Aug. 25, Mr. Jaspert said the UK had extended an offer in the early days of the pandemic to beef up border security, but that this offer “was not supported at the time.”

Mr. Fahie took issue with the statement, but the next day opposition members questioned the administration’s motivation for turning down the UK’s initial offer, criticising Mr. Fahie’s ongoing friction with the governor.

“Don’t tell me it’s the UK against the BVI … and then try to justify the promotion of BVIslanders,” said opposition member Mitch Turnbull (R-D2).

On Friday, Mr. Jaspert said he also felt that it was a mistake for the VI to turn down the UK’s offer at the pandemic’s outset in the VI, adding that he has continuously encouraged VI leaders to change their minds since then.

“Now, in light of recent events and subsequent consequences, I feel I must do all in my power to protect the people of the British Virgin Islands and to support our dedicated law enforcement teams,” Mr. Jaspert stated.

Though it is unclear what is included in the “surveillance system” Mr. Fahie mentioned in his letter to Ms. Sugg, the territory increased manpower to beef up border patrols in late August after a sharp spike in Covid-19 cases that was blamed largely on illegal entrants.

In addition to assembling the Joint Task Force with police, customs and immigration officers, the government also began paying $4,666.67 daily for each of three barges from which these officers can survey the waters and easily launch into action, Health and Social Development Minister Carvin Malone said on Sept. 4.

During the Aug. 26 opposition press conference, Mr. Turnbull panned the government’s use of these barges as a costly publicity stunt that he said would do little to actually deter smugglers. “That may sound good, but do we have the infrastructure between customs, between immigration?” he aside, adding, “Are we serious about this or are we spending money just to say we’re spending money?”

In his Friday statement, Mr. Jaspert did not mention any requests to the UK other than the services of the naval ship, though he said that he is “currently preparing a further offer of UK support designed to further build local skills and capability here in the BVI.”

According to the governor, he is considering what to request in this next package based on conversations with officers in the joint task force and other residents, though he would not divulge any more details “until plans are discussed and agreed,” he stated.

But if the premier’s letter is any indication, finding common ground could prove tricky if Mr. Jaspert does not adhere more strictly to the government’s wishes.

In his letter to Ms. Sugg, Mr. Fahie wrote, “I remain optimistic that you will take steps to correct the high-handed actions of your governor this afternoon and to ensure that the remainder of his stay in the BVI does not involve any further instances of insensitivity or gross disrespect to the people of the Virgin Islands or their elected government.”

Mr. Jaspert did not respond publicly to Mr. Fahie’s attack, but in response to a request for comment from him, Governor’s Office spokeswoman Sandie McKenzie emailed yesterday, “The governor’s top priority is to ensure the safety and security of the people living in the British Virgin Islands, and to build local capacity as much as possible.”