Despite a few delays in recent weeks, Governor John Rankin said yesterday that he has “no major concerns” with the government’s progress toward its commitment to implement a series of …

END_OF_DOCUMENT_TOKEN_TO_BE_REPLACED 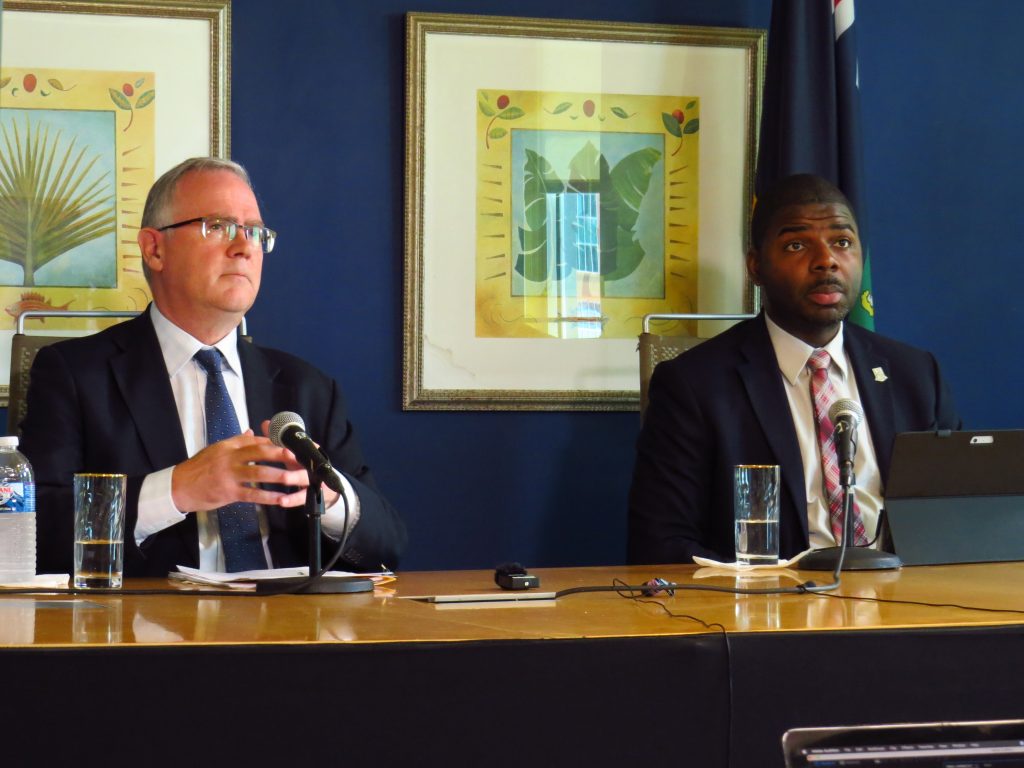 Despite a few delays in recent weeks, Governor John Rankin said yesterday that he has “no major concerns” with the government’s progress toward its commitment to implement a series of reforms recommended by the Commission of Inquiry report.

“As I’ve said before, as long as the failure to meet a deadline is for genuine reasons, and not for any unnecessary delay or frustration in implementation, then this is something we can manage,” Mr. Rankin said during a joint press conference with Premier Dr. Natalio “Sowande” Wheatley.“Some report progress has been made in a number of areas. At the same time, there is still much to be done, more changes to be made, and difficult decisions to be taken.”

More details, he said, will be provided next month in his first quarterly review on the implementation of the COI recommendations. That report — which he said will be made public — will review “the overall assessment of progress and political culture exhibited in the day-to-day operations of the government,” he said.

Also during the press conference, the governor and premier touted recent progress toward several promised reforms.

This progress, they said, includes an arrest in the ongoing criminal investigation of the Elmore Stoutt High School wall project; appointments to lead a review into election officials’ discretionary powers; legislative amendments to give government auditors more teeth; a proposed new Jury Act, and many more.

Meanwhile, the governor added, the auditor general and her team continue to investigate Covid-19 grants, assistance grants, and the disposal of crown lands, among other areas.

The auditor general was recently granted more power to get that job done, Dr. Wheatley said, explaining that his government.

has amended the Audit Act to include penalties for public officers who impede her investigations.

Also underway — with the help of an expert team provided by UNICEF — is a wholesale review of the territory’s welfare, benefits and grants system, according to the governor.

Dr. Wheatley provided further updates on this process, noting that a transitional grant programme was implemented last month after legislators gave up their power to disburse assistance grants. Now, such aid will be distributed instead through the Social Development Department’s Public Assistance Programme.

“The department dispatched social workers into communities, including sister islands, and commenced the use of a digital system to capture information needed for registration and enrollment of beneficiaries into the Public Assistance Programme,” the premier said. “The electronic registration tool developed with assistance from the World Food Programme is being piloted among transitioning beneficiaries.”

Despite the largely positive updates, the governor also expressed concern about recent amendments to the Register of Interests Act 2006, which he said came to his desk yesterday morning.

Legislators said last month when publicly debating the Register of Interests (Amendment) Act 2022 that it would open the register to the public — thereby meeting one of the government’s reform commitments.

But yesterday Mr. Rankin raised questions about changes to the act made in a closed-door committee session in the House of Assembly.

“I am concerned that the effect of the amendments is to significantly restrict public access to the register, and, if so, that would run counter to a new culture of transparency and accountability towards which we are working,” the governor said.

Asked later to provide specifics about his concerns, the governor said the committee amendments restrict “what people can do with the information in the register.”

“Further steps are required in terms of greater transparency,” he added.

Later in the press conference, however, Dr. Wheatley said the amendments came as a result of high-level feedback and “robust debate” in the HOA. He also argued that the amended act is within the framework of the government’s proposal to implement the COI recommendations.

The register is not public yet, and the act awaits the governor’s assent.