During a press conference on Friday, Governor Gus Jaspert emphasised the importance of recovery and development, including the £300 million United Kingdom loan guarantee that would allow the Virgin Islands …

END_OF_DOCUMENT_TOKEN_TO_BE_REPLACED 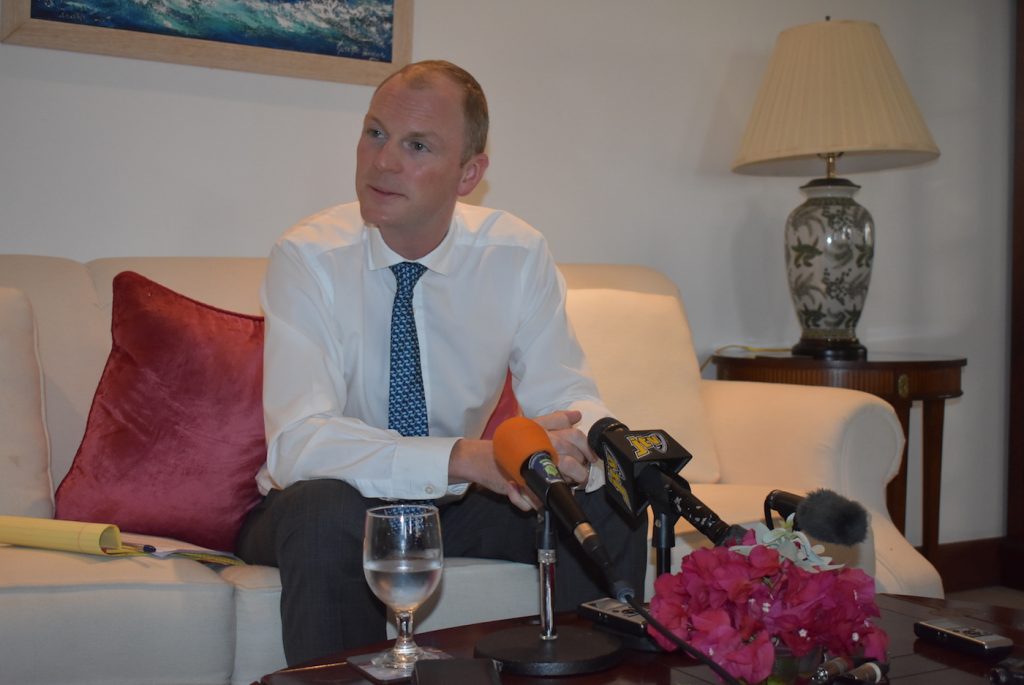 Governor Gus Jaspert said on March 26 that he would not issue a writ for a Fourth District by-election. (Photo: GENEVIEVE GLATSKY)

During a press conference on Friday, Governor Gus Jaspert emphasised the importance of recovery and development, including the £300 million United Kingdom loan guarantee that would allow the Virgin Islands to save millions of dollars by borrowing money for recovery at a cheaper rate.

The guarantee, an assurance that the UK would assume the VI’s recovery-related debt obligations if the territory defaults, was accepted a year ago by the House of Assembly when it passed the Recovery and Development Agency Act.

The bill passed after a contentious debate between members who felt the offer was controlling and insulting and others who felt it was helpful and practical.

But thus far the VI has not actually accessed any loans under the UK guarantee, and the governor said on Friday that the first step is creating a detailed plan to submit to the UK government.

“It’s a bit like going to the bank,” he said. “You can’t borrow money without saying what you want to do with the money.”

After the territory passes a Medium Term Fiscal Plan, the UK government would consider its loan request and then send it to the UK Parliament, explained Mr. Jaspert, who did not mention the VI government’s most recent MTFP, which was published last April.

The next step, he added, would involve discussions with development banks and financial institutions.

“It’s an area that the newly elected government will need to work on at pace,” the governor said.

Natalie Hodge, the deputy chief information officer in the Department of Information and Public Relations, said she did not have an update on any progress the government has made toward accessing the loan, and attempts to obtain comment from the Premier’s Office were not immediately successful.

Meanwhile, the VI has been struggling to access the main recovery loan that it did manage to acquire: $65 million from the Caribbean Development Bank for rehabilitation and reconstruction.

As of December, the government had drawn down $15 million and was paying interest on it, but only $2.4 million worth of initiatives had been charged to the loan at the time because of the lengthy CDB loan process, Dr. Smith told the HOA at the time.

An update provided by government this month suggested that nearly $4.6 million worth of contracts had been signed under the loan as of last month.

On Friday the governor said he was working with the premier to speed up the recovery process.

In addition to emphasising priorities like disaster preparedness and good governance, the governor also took pains to clarify the recent UK Foreign Affairs Committee report, which included recommendations for phasing out belongership and legalising same-sex marriage in the overseas territories.

He stressed that the report, which drew indignation across the territory, came from one of several parliamentary select committees, which examine various areas of governmental affairs, and does not reflect UK government policy.

He added that he would pass on concerns about the report to London, and that the UK Foreign and Commonwealth Office would issue a response to the document by April 21.

“The report speaks to the issue of every member of this society being valued and being able to live among each other in a fully unified and democratic society,” he said. “I am encouraging persons to read the document for themselves as these are important issues that I hope will be discussed locally.”

In discussing the new government’s transition, which he said is moving at“a very fast pace,” the governor praised the premier’s decision to hold the first Cabinet meeting in Virgin Gorda for the first time.

He also commended the European Union’s recent announcement to remove the VI from its “blacklist.”

“The decision about the blacklist is a very good decision, and personally I believe completely the right decision,” he said. “The territory has a well-regulated industry, and it has proven that.”

In regards to disaster preparedness, the governor said the Department of Disaster Management is working to ensure that shelters, contingency supplies, and early warning systems are up to speed and said the UK government had provided backup satellite communications, emergency generators and other materials.

He also touched on his priority area of good governance, and said he supported the premier’s pledge for transparency.

“I know that the premier is keen on promoting openness and transparency in all aspects of public life and public service as outlined in his party’s manifesto,” he said. “I look forward to his government putting the necessary legislation in place and the establishment of commissions that would hold persons accountable.”