In a move feared by international free-speech advocates, Governor Gus Jaspert announced last week that he had assented to a cybercrime amendment that they predict will stifle free speech and …

END_OF_DOCUMENT_TOKEN_TO_BE_REPLACED 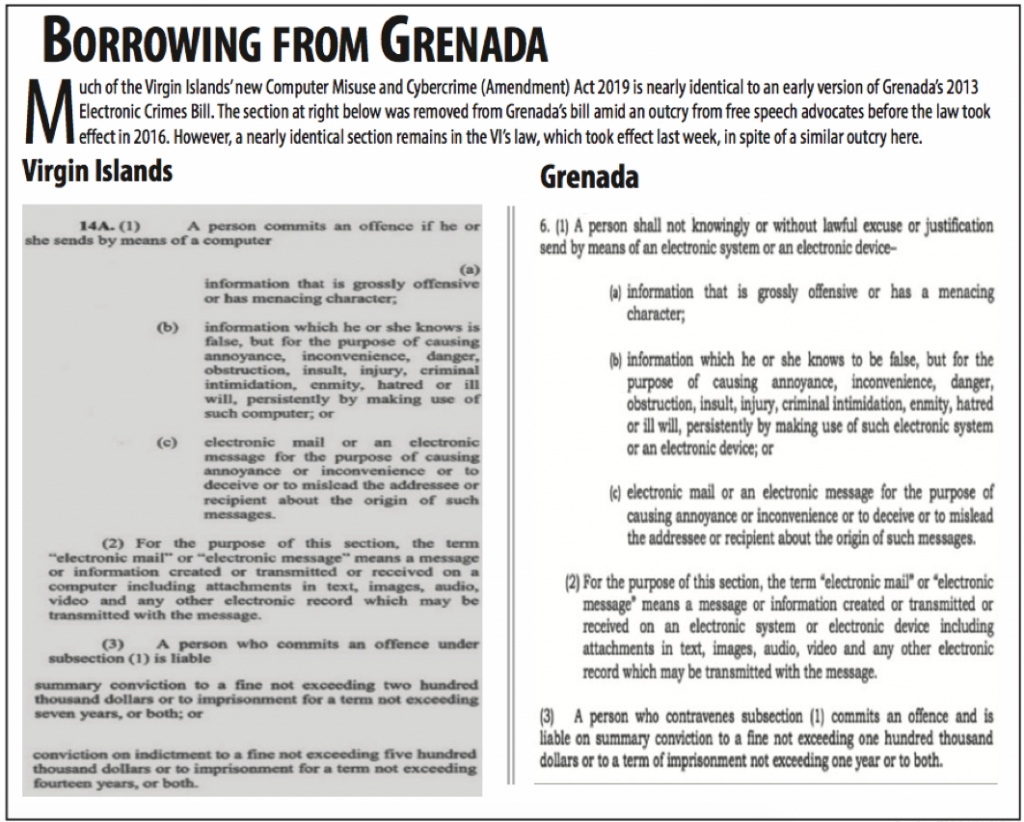 Much of the Virgin Islands’ new Computer Misuse and Cybercrime (Amendment) Act 2019 is nearly identical to an early version of Grenada’s 2013 Electronic Crimes Bill. The section at right below was removed from Grenada’s bill amid an outcry from free speech advocates before the law took effect in 2016. However, a nearly identical section remains in the VI’s law, which took effect last week, in spite of a similar outcry here. (Graphic: TODD VANSICKLE)

In a move feared by international free-speech advocates, Governor Gus Jaspert announced last week that he had assented to a cybercrime amendment that they predict will stifle free speech and hinder the media from doing its job.

The Computer Misuse and Cybercrime (Amendment) Act 2019, which makes changes to a 2014 law, is designed to curtail nefarious online behaviour, including bullying, stalking, character assassination and blackmail.

However, free-speech organisations strongly criticised portions of the proposed law. Of particular concern, they say, are a clause criminalising electronic defamation and a provision that could punish anyone who sends a “grossly offensive” email with up to 14 years in prison and a fine of up to $500,000.

In a Feb. 12 statement announcing that the law had taken effect, Mr. Jaspert sought to allay concerns about the law, which he has been discussing with Premier Andrew Fahie.

“I have been assured that those provisions in the amended act that have attracted criticism should not, and will not, be seen as free rein for prosecuting content which is consistent with guarantees of freedom of expression in a democratic society,” wrote Mr. Jaspert, who was unavailable for comment this week as he was away from the territory on official business.

The governor added that he considered the provisions in the act carefully before giving his approval.

“Many of these amendments are positive steps and are needed to deter nefarious online behaviour such as cyberbullying, to prevent identity theft and fraud, and to protect children and vulnerable people,” he wrote.

Mr. Jaspert also acknowledged the issues raised by media groups. “Concerns have been expressed to me by the local and regional members of the media, particularly in relation to freedom of expression,” Mr. Jaspert wrote.

“My view is that freedom of expression can, and should, include the right to appropriately say things that others may not want to hear. Social media and online platforms are necessary in a democracy for discussion, exchange of information and opinions.”

In spite of his concerns, Mr. Jaspert assented to the amendment rather than sending it back to the House of Assembly to provide better protection for free-speech rights.

However, he said, he recommended that acting Director of Public Prosecutions Tiffany Scatliffe-Esprit consider drafting guidelines to “help ensure that the offences created under the [law] as amended can be prosecuted fairly and effectively without compromising freedom of speech guaranteed by the Virgin Islands Constitution Order 2007, particularly protection for those commenting online and for journalistic reporting.”

The request to the DPP was prompted by discussions between the governor and the premier after Mr. Jaspert wrote to express concerns about the law, according to Governor’s Office Policy Officer Maria Mays.

“The governor received a considered response from the premier — this prompted the discussion on the possibility of the DPP drafting guidelines,” Ms. Mays wrote in an email.

However, Mr. Jaspert will not make any suggestions about what would be included in the guidelines, Ms. Mays said, noting that section 59 (6) of the Constitution states that neither the governor nor anyone else can direct the DPP’s actions. The Governor’s Office did not offer a timeline for when it hopes to see the guidelines drafted, and attempts to contact the DPP this week were unsuccessful. Mr. Fahie also did not respond to requests for comment.

Press organisations started criticising the bill at least two months before it passed the HOA in October. One of their top concerns stemmed from section 14B, which criminalises electronic defamation and makes the offence punishable by up to three years in prison and a $100,000 fine.

Daphne Pellegrino, a representative from the Paris-based Reporters Without Borders, previously told the Beacon that criminalising defamation “fosters a climate of fear and self-censorship” among reporters covering sensitive stories.

Media organisations also took issue with section 14A of the VI bill, which criminalises “sending offensive messages through a computer.” The provision — which carries penalties up to 14 years in prison and a fine of up to $500,000 — prohibits sending any electronic message that is “grossly offensive or has menacing character” or that is sent “for the purpose of causing annoyance or inconvenience.”

RWB, the Vienna-based International Press Institute, and the New York-based Committee to Protect Journalists sent letters to the governor criticising the law, and the Association of Caribbean Media Workers publicly protested as well.

Yesterday, Dokhi Fassihian, executive director of RWB’s North America bureau, said the organisation was disappointed that the governor signed the bill into law with Sections 14A, 14B and 14P still intact. The third section permits a police officer without a warrant to arrest a person reasonably suspected of committing a cybercrime offence.

“RWB stands by our concerns about the potentially chilling effect those provisions could have on journalism in the British Virgin Islands,” Mr. Fassihian said yesterday in a statement. “It has become increasingly common in recent years in many jurisdictions, not just in the British Virgin Islands: An alleged effort by lawmakers to address a narrow problem leads to expansive and vague laws that can be misinterpreted, or potentially even weaponised, to the detriment of free speech or a free press.”

“Guidelines aren’t binding but laws are, and as it exists now this law needs to be repealed,” he said.

Despite such criticism, Mr. Fahie has defended the law, and last month he publicly urged Mr. Jaspert to pass it, arguing that it had undergone “the most democratic process.”

Mr. Jaspert said during a press conference earlier this month that it was an important bill to consider, though he didn’t telegraph his plans to assent.

Two of the controversial sections of the VI’s cybercrime bill are nearly identical to clauses that were struck from a proposed law in Grenada years ago after an international outcry from free-speech groups.

The originally proposed version of Grenada’s 2013 Electronic Crimes Bill would have punished “sending offensive messages through communication services” with up to one year in prison — much lighter than the VI law’s penalty — and it would have given police broad powers to make arrests without a warrant.

However, those provisions never took effect in Grenada even though both remain in the VI law.

The United Kingdom’s Communications Act 2003 similarly bans sending digital messages that are “grossly offensive or of an indecent, obscene or menacing character.” It also prohibits sending a message that a person knows is false and causes “annoyance, inconvenience or needless anxiety to another.”

However, there are at least two key differences to the VI’s amended act. The potential prison time is much lighter, with a maximum of six months. And when the UK’s Communications Act passed in 2003, the maximum fine was “Level 5,” or £5,000. However, Level 5 fines were bumped up to “unlimited” in 2015.

For the same offence, VI residents face up to 14 years in prison and a fine of up to $500,000. Media watchdogs found the VI’s extreme penalties be dangerously out of step with international standards.

The provision in the UK law also exempts “anything done in the course of providing a programme service” as defined in the Broadcasting Act 1990. That act defines a “programme service” as a service that electronically transmits sounds or images to the public, which could seemingly include online news organisations.

The VI’s cybercrime amendment, by contrast, doesn’t afford any such protection for journalists.