Speech from the Throne lays out House of Assembly agenda

About a month after the House of Assembly passed a nearly $400 million budget that members said would be used to steer the economic recovery following recent crises, a new …

END_OF_DOCUMENT_TOKEN_TO_BE_REPLACED 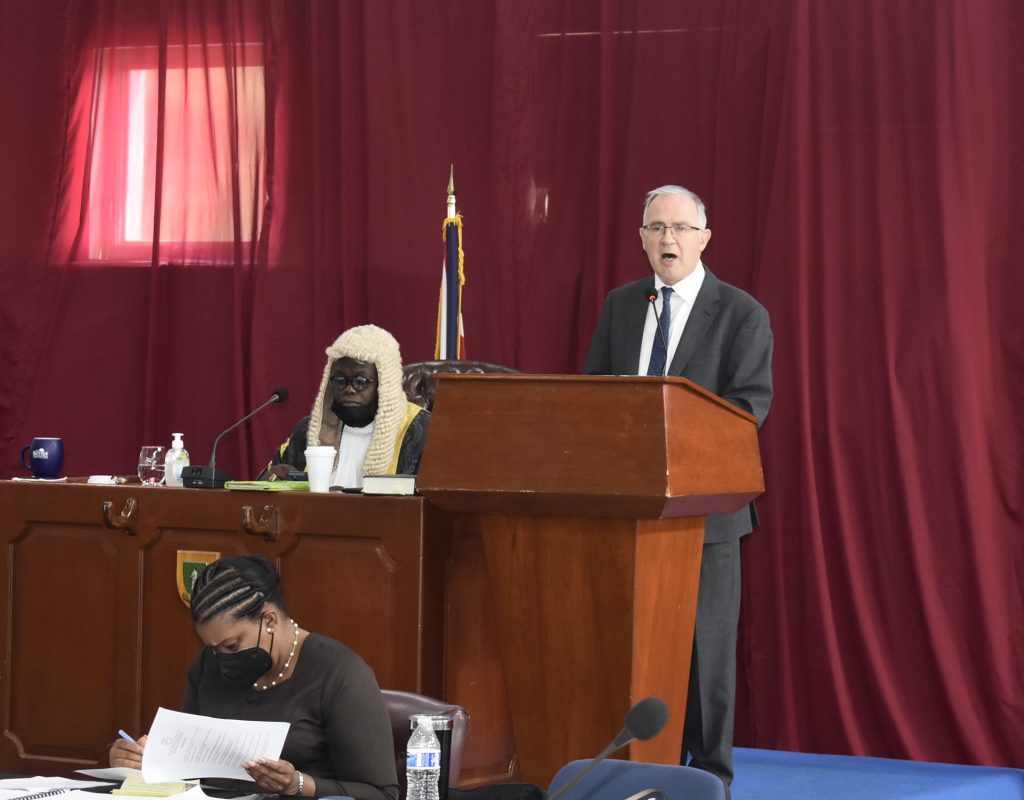 During his Speech from the Throne on Tuesday, Governor John Rankin outlined the House of Assembly’s 2022 legislative agenda, which includes laws meant to improve the territory’s infrastructure, crack down on sex crimes, promote food security, and protect the environment, among other goals. (Photo: JOEY WALDINGER)

About a month after the House of Assembly passed a nearly $400 million budget that members said would be used to steer the economic recovery following recent crises, a new HOA session started Tuesday and Governor John Rankin delivered his Speech from the Throne outlining new policies and laws the government will try to pass in the coming months.

The House’s 2022 legislative agenda covers a wide range of environmental, governmental, social, and economic issues, though new laws make up only a small fraction of the government’s objectives.

Over the course of 13 sittings during the HOA’s previous session, it considered and approved 43 pieces of legislation, but most of the 61 bills and acts announced on Tuesday for the new session were repeated from previous years.

One of the most well-known bills the House plans to pass is the Virgin Islands Food Security and Sustainability Bill. The law, first proposed in August 2020, would create a government agency to handle the sale of food grown and caught in the territory, Mr. Rankin read.

Another bill that has been receiving attention since Tuesday’s speech is the Sexual Offences Bill, a wide-ranging law that former Governor Gus Jaspert also proposed in 2018. If enacted, the bill would address legal proceedings in sexual violence cases and support victims of sexual abuse, according to Mr. Rankin.

The House also appears determined to tackle other health and safety issues this legislative session, with The Children (Care and Adoption) Bill and Correctional Facilities Act both on the legislative agenda.

The House will also attempt something that successive governments have failed to do despite years of promises: enact overarching environmental legislation.

A comprehensive environmental bill has been in the pipeline since at least 2008. Most recently, the previous Throne speech promised the Environmental Management and Climate Resilience Act, which would create a broad framework for environmental management and biodiversity conservation.

The House is now taking up that bill again, attempting to pass it along with the Marine Estate Administration and Coastal Zone Management Bill, which would “establish the limits of the exclusive economic zone and support the effective administration and management of the coastal resources for the conservation and enhancement of marine resources of the Virgin Islands,” Mr. Rankin said.

The governor added that legislators also hope to pass the Plastic Litter Reduction and Container Deposit Bill and the Waste Management Bill.

The litter law would outlaw eating utensils made of non-compostable plastic, while the waste management law would “strengthen the legal framework for sustainable management of household waste, industrial waste, construction and demolition waste, and hazardous waste to protect health and the environment while improving the aesthetics of the Virgin Islands,” Mr. Rankin said.

Many of the laws to be introduced this year, like those aimed at addressing the territory’s crumbling roads and water delivery system, were either carried over from previous years or are revisions to existing laws.

One law being carried over is the Architects and Engineers Registration Bill, which would “ensure that all architects and engineers practising in the Virgin Islands are registered, licensed, and regulated,” Mr. Rankin said.

The House also hopes to pass a related bill, the Water and Sewerage Authority Bill, which would establish a statutory body to oversee water supply and sanitation services.

Additionally, lawmakers plan amendments to several existing bills, including the Disaster Management Act 2019, which would better “reflect our current modern partnership between the United Kingdom and the [VI],” and the Elections Act 2019, which would seek to make it easier to register voters and compile voter data, Mr. Rankin said.

The governor also highlighted a raft of measures meant to beef up the territory’s education system, which drew ire this year as teachers complained over insufficient resources and students were forced online by the pandemic and by mould-infested buildings.

In an apparent response to the pandemic-driven migration to online learning, government is looking to further amend the 2004 Education Act by creating technology-driven standards and expanding the vocational programmes available to Virgin Islanders, the governor said.

Although the government does not intend to introduce any new educational bills in 2022, it has devised a new policy to support special education; it has revised the student code of conduct to include online protocols and emphasise student support services; and it is updating the National Scholarship Policy, Mr. Rankin said.

He added that government “will seek to establish a Virgin Islands National Sports Council Act” that will overhaul sports and recreation development in the territory.

After the territory’s immigration policies came under heavy scrutiny during the Commission of Inquiry last year, government is aiming to amend the VI’s bedrock immigration law: the Immigration and Passport Act 1977.

Beyond giving special consideration for residency and belongership to people working in education, law enforcement, and health care, the amendments seek to impose a new “fee structure and additional services that respond to the Virgin Islands’ current needs for greater protection of our borders, and the orderly admission of migrant workers and residents,” Mr. Rankin said.

The governor also said that the House will introduce several governance reforms that, like the improvements to the territory’s immigration policy, have been long promised.

Chief among them is the Freedom of Information Act, which originally was drafted by the Law Reform Commission in 2004 and subsequently has been promised regularly in Throne speeches as far back as 2011.

The House will also introduce the Public Service Management Code, which will replace the General Orders 1982 and provide terms and conditions for public officers and employees, according to the governor.

Additionally, the House will review the Jury Act with the goal of better selecting jurors and establishing a juries register, and seek amendments to the Proceeds of Criminal Conduct Act and the Magistrates Code of Procedure Rules, Mr. Rankin said.

Along with this legislative agenda, the governor said that lawmakers this year will carry out the long overdue Constitutional review and advance the National Sustainable Development Plan, which is currently available for public review.

“I look forward to continuing to carry out my responsibilities under the Constitution with regard to the elected government’s legislative agenda, in the best interest of the people of the Virgin Islands and their good governance,” Mr. Rankin added.

Later in the HOA sitting, opposition member Mark Vanterpool reiterated that the Speech from the Throne isn’t “what the governor wants: It’s what the leader of government is presenting as his agenda.”

He also said that he doesn’t wish for the tradition to be maintained.

“The leader of the country needs to present his agenda for the country,” he stated.