Governor Gus Jaspert acknowledged to reporters Tuesday that many of the accountability and transparency measures the government promised in this month’s Speech from the Throne are old news. Still, he …

END_OF_DOCUMENT_TOKEN_TO_BE_REPLACED 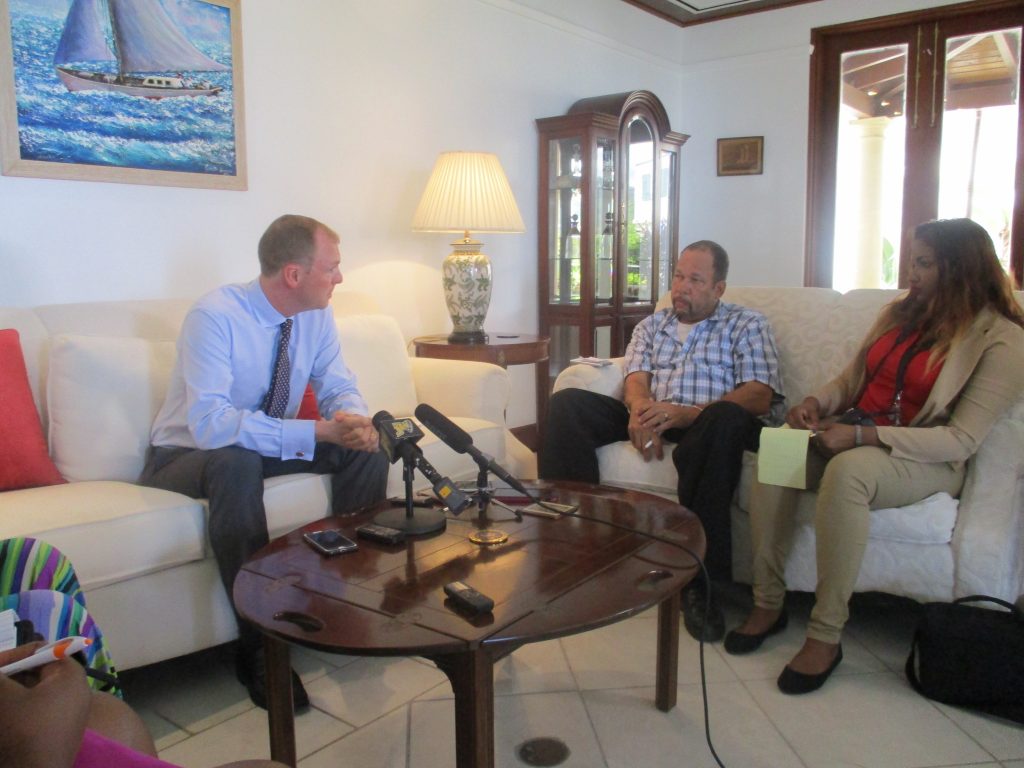 Governor Gus Jaspert acknowledged to reporters Tuesday that many of the accountability and transparency measures the government promised in this month’s Speech from the Throne are old news.

Still, he emphasised his commitment to turning speech into action.
“I do recognise that these good governance measures have been included in a number of speeches before,” he said at a press conference at Government House, but added that such steps are “absolutely vital in order to build the institutions of the state in the BVI.”

He then pointed to several moves that he believes underscore the overall commitment from the government to promote openness and transparency, including the fact that the Human Rights Commission Act, a piece of legislation promised every year since 2008, was recently laid on the table in the House of Assembly.

In addition, starting this week Cabinet decisions, which previously were confidential, will be disclosed by the Cabinet secretary on the Thursday of the week following each Cabinet meeting, the governor announced.

Not all Cabinet activities will be disclosed, however.

“They don’t capture all the discussions,” the governor explained, adding, “Those are private discussions. It’s the end decision that is a government decision, and that is what will go out.”

Some decisions pertaining to national security, personal data or privacy also will be withheld, he explained.

“The Cabinet secretary has guidelines on those, and also the premier and I do a check on that as well,” Mr. Jaspert said.

Reporters pressed the governor to comment on several familiar elements of this month’s Throne speech related to good governance, such as the Register of Interests. The legislation to create the register was passed in 2008 to discourage conflicts of interest among elected officials, but some HOA members have been consistently delinquent with their reporting requirements.

“There is work under way,”the governor said. “There’s a secrecy thing around it because work has to be done on data protection as we make sure we do that in the right way.”

Asked for his opinion on the continued inaction on the Consumer Protection Bill, also included in many previous Throne speeches, the governor declined to state his views.

“I’m not going to comment on whether [the inaction] is sad or not. I think it’s an important piece of legislation; that’s why it was in the Speech from the Throne,” he said. “I see that from what I hear from people about the impact of not having that legislation.”

He declined to discuss timetables for any legislation, referring those questions to Premier Dr. Orlando Smith, but said, “Anything that goes in the Speech from the Throne I fully believe should be implemented.”

Responding to another question, the governor acknowledged that there recently was a backlog of audits of government accounts dating to 2007, long before his time in office, but said that he is pleased that progress is being made.

“Those accounts through the auditor general have now started to clear,” he said. “There’s been good progress made. We should never get into a situation where accounts aren’t done.”

The governor also responded to questions about ongoing audits of specific projects, including one that concerns the construction of a nearly $1 million-plus perimetre wall around Elmore Stoutt High School. That probe is now concluding, and the governor said he will make it available to the HOA “once I’ve had a chance to consider it.”

The same goes for an inde- pendent report on the breach at Her Majesty’s Prison during Hurricane Irma, which is also forthcoming.

“We’ll make public everything that can be made public without hitting any operational or confidential [information],” he said.

Preparations are under way for the current season, with 21 shelters operational and repairs under way at 13 others that are “coming online very soon,” he said.

Marine shelters at Paraquita Bay and Sea Cows Bay are being prepared, with derelict boats being removed.

The United Kingdom is also providing support for more resiliencommunication networks, and the Department of Disaster Management is restoring early warning systems, including sirens and backup satellite phones, and stocking up on contingency supplies and generators, which the governor pointed out already proved useful last week when the power went down on Anegada.

“I was very pleased with the rapid action the [BVI Electricity Corporation] were able to take using two of those United Kingdom generators to get power back on in under 24 hours,” he said.

He declined to provide details of which supplies are being stock piled or how many, but said the DDM has a full inventory.

“The focus has been in each community making sure there is adequate support,” he said. “That varies across communities and varies across supplies.”

Mr. Jaspert said multiple independent reviews were carried out to assess the process of aid distribution after the hurricane.

One conducted by the Caribbean Disaster Emergency Management Agency is now complete and “coming through the system,” he explained, adding that it will be made public after he’s had a chance to review it.

The governor also said he is “very aggressive”on the $5 million plan to increase security in the territory, which includes increasing the number of CCTV cameras, some of which are already up and running.

“There’s still more to be installed, … and also improvements for getting another police boat back on and getting customs infrastructure repaired as well,” he said. “It’s top priority.”

Funded by the UK, infrastructure repairs are happening at police stations throughout the territory, including in Road Town and the sister islands, according to the governor. Ports, immigration and police are also cooperating more to decrease the amount of contraband substances entering the territory, he said.

“Firearms training and new armed response vehicles were funded by the United Kingdom,” Mr. Jaspert added. “We are already seeing results with a number of seizures by the Armed Response Unit. So we are moving forward with improving security in these islands.”