Local News > Governor: UK will not take over government

Governor: UK will not take over government

Governor Gus Jaspert emphasised the importance of environmentally sustainable practices during a press conference last Thursday at Government House. It was one of several points he made during the “Catch …

END_OF_DOCUMENT_TOKEN_TO_BE_REPLACED 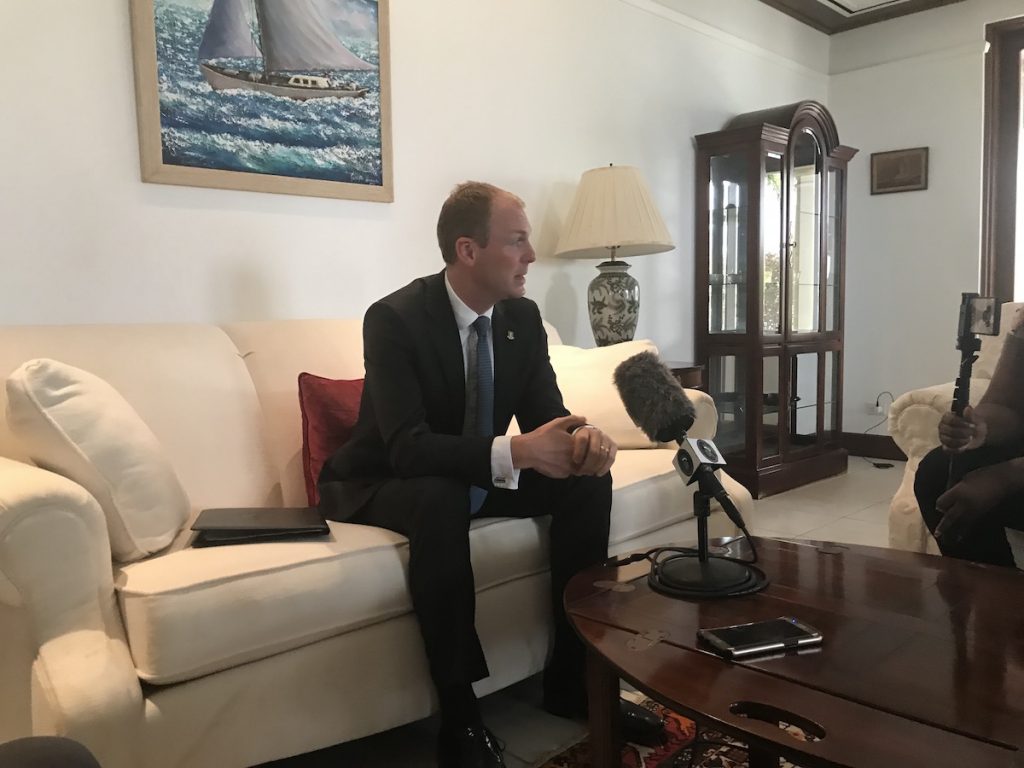 Governor Gus Jaspert said at a press conference at Government House last Thursday that it is up to the House of Assembly to swear in “member-elect” Mark Vanterpool. (Photo: GENEVIEVE GLATSKY)

It was one of several points he made during the “Catch Up” session, which covered various topics under his portfolio.

Government House and the Governor’s Office, he explained, are finding ways to reduce their impact on the environment by cutting down on plastic use, planting vegetables, and setting up recycling facilities.

Mr. Jaspert also packed groceries into reusable bags at the Rite Way in Pasea on Friday to discourage the use of disposable plastic.

Mr. Jaspert declined to comment on the recent Cabinet decision to revoke all of the memberships of the Climate Change Trust Fund board — a move that appeared to overstep the authority granted to Cabinet under the board’s enabling legislation.

But he did point out that the decision was made by Cabinet, and that while he is chair of Cabinet he does not have a vote and refrains from commenting on the discussions in order to preserve the principles of frank and open exchange.

“It would be inappropriate of me to share the points that individuals make in those discussions,” he said. “The ultimate decision is the collective decision. On this issue it’s really a question for the premier on his views on that, but as a general thing the law must always be applied. In any matter.”

In regards to the legal dispute between Speaker of the House Julian Willock and Mark Vanterpool, Mr. Jaspert repeated his comments that it is up to the House of Assembly to swear in “the member-elect.”

He rejected suggestions that he or the United Kingdom might take over the government to resolve the issue.

“That always seems to be the response. Very quickly people jump to that conclusion,” he said, adding that it is more important that the institutions in the Virgin Islands work effectively.

“I always feel the governor, when they arrive and when they leave their handover note to their successor, should say, ‘You have less to do than I had to do. The institutions of the territory are stronger, democracy is working better, the institutions are working more effectively whether that’s in terms of accountability, transparency, representation. The government is more effective.’ If people always say, ‘Oh, what’s the UK going to do’ or ‘What’s the governor going to do,’ it’s the wrong question.”

He also made brief comments on the UK government’s response to the parliamentary Foreign Affairs Committee report, which called for the imposition of same-sex marriage and the end of belongership.

The response, he said, clearly stated that the territories should work out the issues themselves.

He added that he agrees with the UK position that same-sex relationships should be treated equally under the law, and pointed out that the VI Constitution prescribes fundamental rights and freedoms regardless of sexual orientation.

“It’s really a matter for the local people to decide how they want to best go forward on that,” he said.

In regards to the proposed reforms to the process of acquiring belonger and permanent resident status, he said he was pleased to see Premier Andrew Fahie engaging in consultations with the public.

“It’s very good that, thinking from my perspective, that issues of ensuring the right level of status and that people are valued in society and unified as a society as a whole is taken forward and that the premier is rightly leading those consultations with his ministers on that,” he said.