After more than twelve hours of debate over two days, the House of Assembly on Dec. 15 passed a nearly $400 million budget for 2022, with almost $337 million put …

END_OF_DOCUMENT_TOKEN_TO_BE_REPLACED 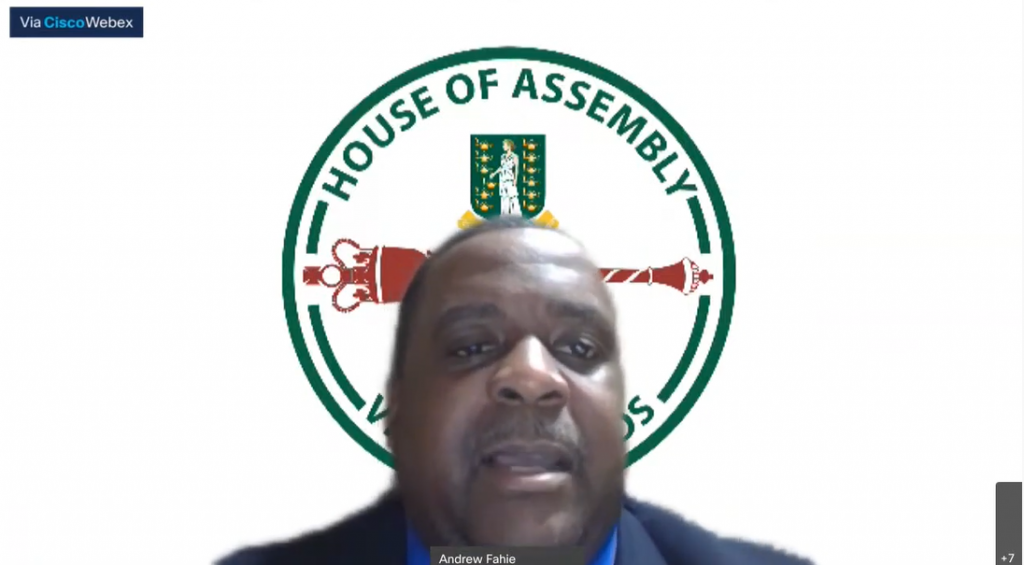 During the two day debate preceding the passing of the $400 million 2022 budget, Premier Andrew Fahie and other government leaders promised to finish major outstanding projects while continuing to lead an economic resurgence in the wake of Hurricane Irma and the Covid-19 pandemic. (Screenshot: HOA)

After more than twelve hours of debate over two days, the House of Assembly on Dec. 15 passed a nearly $400 million budget for 2022, with almost $337 million put aside for recurrent expenditures.

Throughout the debate, government officials reflected on a tenure defined by two of the largest disasters to befall the Virgin Islands: Hurricane Irma and the Covid-19 pandemic.

As the last legislator to speak before the bill was passed, Premier Andrew Fahie acknowledged that while some of his administration’s policies were hindered by the pandemic, with the passing of this budget, the territory was prepared to emerge from almost five years of hardship with a revived economy, a repaired infrastructure and healthy social services.

With this budget, Mr. Fahie and his colleagues said they were determined to use this money to complete some of the most high-profile infrastructure projects in the territory, such as the construction of the senior division of the Elmore Stoutt High School; repairs to a water delivery system that costs almost twenty million dollars each year; and improvements to the territory’s airports and other infrastructure critical to bringing in tourists.

Mr. Fahie pointed to the number of airline bookings, which he said had  reached pre-pandemic levels,  as evidence of the tourism industry’s resurgence, a resurgence that he credited in part to government’s courting of the cruise and airline industry while the territory’s borders were closed.

He also fended off some of the criticisms that have been levied at his administration, including for their disbursement of Covid-19 relief funds, and for the millions paid to lawyers hired to defend the government in the Commission of Inquiry, which drew ire during the budget debate from several of his colleagues.

“It’s cheaper to spend the money in defending the name of the Virgin Islands than it is to be making poor decisions costing us [millions of dollars] in lawsuits that we have to pay out,” Mr. Fahie said.

Of all the government ministries, the Ministry for Education, Culture, Youth Affairs, Fisheries and Agriculture received the biggest share of next year’s budget, said ECYFA Minister Dr. Natalio “Sowande” Wheatley.

According to Dr. Wheatley, his ministry was allocated 15 percent of the total budget, or roughly $60 million.

His biggest priority for the next year, he said, is the construction of new buildings for the ESHS senior division, which has been housed at the old CTL building in Pasea Estate since the 2017 hurricanes.

This fall, the closure of the Pasea Estate campus due to a mould infestation, complaints from teachers about stagnant wages and insufficient resources, and maintenance issues at other schools across the territory sparked a teacher “sickout” in which many of them skipped work for several days.

Although Dr. Wheatley decried the fact that so many students and teachers have been resigned to a refurbished warehouse for four years, he painted it as an example of the longstanding  challenges his government has faced.

“This is another situation we inherited, as an administration. It was not of our own making but it’s our job to solve it,” Dr. Wheatley said.

He added “I’m really looking forward to our children and students getting into new buildings at the Lower Estate campus and takingthem out of that warehouse in Pasea … It can’t come fast enough,” he added.

The education minister said that contracts have been signed for necessary demolitions and “design work,” and said he intends to “move swiftly” in selecting tenders for the construction of the new building.

He said that his ministry will continue to improve both schools by installing air conditioning in BFEC and continuing construction of the second floor of Enis Adams.

Dr. Wheatley also commended the government for passing a record number of bills this legislative season, such as the Data Protection Act, the Integrity in Public Life Act, and the Freedom of Information Act.

Earlier in the day, Transportation, Works, and Utilities Minister Kye Rymer spoke about the progress made on his ministry’s central project, the renovation of  the Ralph T. O’Neal Administration Complex.

“We have taken all the necessary measures to ensure this is a first class building,” Mr. Rymer said.

According to Mr. Rymer, the “impact glass,” windows and doors have been installed, and he expects that in the first quarter of next year work will begin on the basement and exterior of the building, and that a new elevator will be installed in the west atrium.

Other outstanding works on the new building include the commissioning of a new generator and electrical and IT outfitting, he said.

Mr. Rymer also said that his ministry will patch up the territory’s aging water distribution network, which results in almost daily leaks.

“The water losses since [Hurricane Irma] were nearly about 80 percent of what water is being produced,” Mr. Rymer said

This results in a deficit of nearly $20 million a year, he added.

“We have to get this addressed,” Mr. Rymer said.