Green Tech to use worms for organic waste composting

Abigail O’Neal is looking to a peculiar ally in the fight to make the territory more waste efficient and food secure: worms. The managing director of Green Technology (BVI) Limited, …

END_OF_DOCUMENT_TOKEN_TO_BE_REPLACED 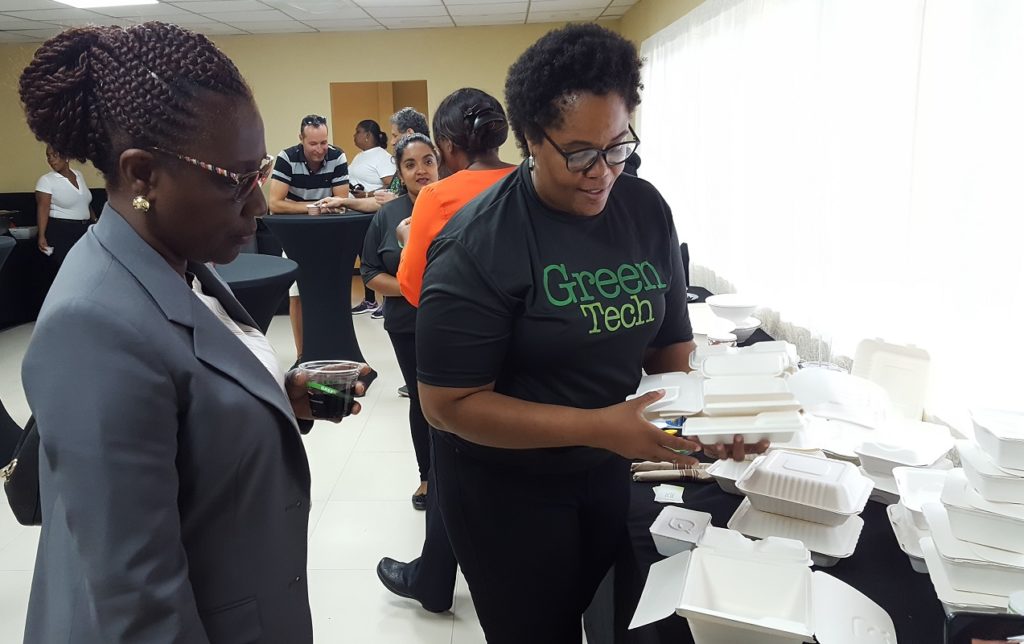 Abigail O’Neal, right, the managing director of Green Technology (BVI) Limited, shows off some of her company’s products during a presentation at the Village Cay conference centre last week. (Photo: CONOR KING DEVITT)

Abigail O’Neal is looking to a peculiar ally in the fight to make the territory more waste efficient and food secure: worms.

The managing director of Green Technology (BVI) Limited, Ms. O’Neal plans to partner with the Canada-based Green Science Technologies to utilise the company’s vermiculture technology — a process that employs certain types of worms to convert organic waste into nutrient-rich fertiliser.

“Imagine using a compostable product and being able to put it into a compostable machine — not outside composting that takes forever and smells horribly — but put it into a machine with vermiculture and create a byproduct known as ‘worm castings’ that will help enhance our agricultural industry,” Ms. O’Neal said during a June 6 presentation unveiling the partnership at Village Cay’s conference centre last week.

Green Technology has so far focused on selling recyclable alternatives to traditional waste-generating products like plastic cutlery and dishware. Ms. O’Neal stressed, however, that this new partnership is the company’s future.

Adrian Johnson, a Canadian who is a major shareholder in Green Science, told the Beacon that the next step would be to send some of the company’s workers down to the territory within two to six weeks to conduct a “waste audit.”

That exercise, he explained, will examine what kind of waste is produced in the territory, how much of it is produced, and what the typical transportation routes and methods are.

From there, a picture will begin to take shape: Green Science will have a better idea of what size and how many digester machines — they range in processing capacity from half a tonne to ten tonnes of organic waste per day — to import into the territory.

Both Mr. Johnson and Ms. O’Neal predicted that the worms would be feeding in the Virgin Islands by the end of 2018.

The partnership’s first phase would largely involve processing industrial waste from resorts and grocery stores, though a longer-term education component is planned to encourage more waste separation at the residential level, according to the Canadian shareholder.

The benefits could be wide ranging: Mr. Johnson noted that about 80 percent of organic waste is liquid, which will be recycled into “grey water” for watering plants or treated and converted into drinking water.

The other 20 percent, he explained, will be converted into the nutrient-rich worm castings.

“Our objective is to take you from where you are now — which is approximately three percent food support. … We want to take you from that to something much more significant,” he said, adding, “We’ll make a proposal for what that looks like, but I’d like to say we could try to take the territory from three percent to, I don’t know, 25 percent or 30 percent in five years or six years.”

“From the government’s point of view, certainly from where I see it, we are 100 percent behind what Abby is trying to bring to the BVI along with the team from Toronto,” said Dr. Pickering (R-D7), who is the minister of natural resources and labour.

He also noted that he hopes the partnership would pilot its project on Virgin Gorda, an island that has already done more work than the rest of the territory on isolating and recycling different waste streams due largely to Julie Swartz’s efforts with Green and Clean VI Limited.

Charlotte McDevitt, the executive director of the not-for-profit Green VI, sang the praises of vermiculture, calling it a “fabulous thing” and a great educational tool for children due to its tactile nature.

In an interview with the Beacon this week, Ms. O’Neal noted that scientists with the Department of Agriculture are working to see if a local species of worm could be selectively bred to consume the waste, which could mitigate worries regarding the importation of invasive species. Currently, she explained, the local species of worms did not consume at a fast-enough rate for the digester machines.

In the end, what worms are used for the process will be up to the Agriculture Department, according to Ms. O’Neal.