The BVI Electricity Corporation broke ground on a major Anegada solar plant last month after more than two years of delays, but no planning application has been submitted for the …

END_OF_DOCUMENT_TOKEN_TO_BE_REPLACED 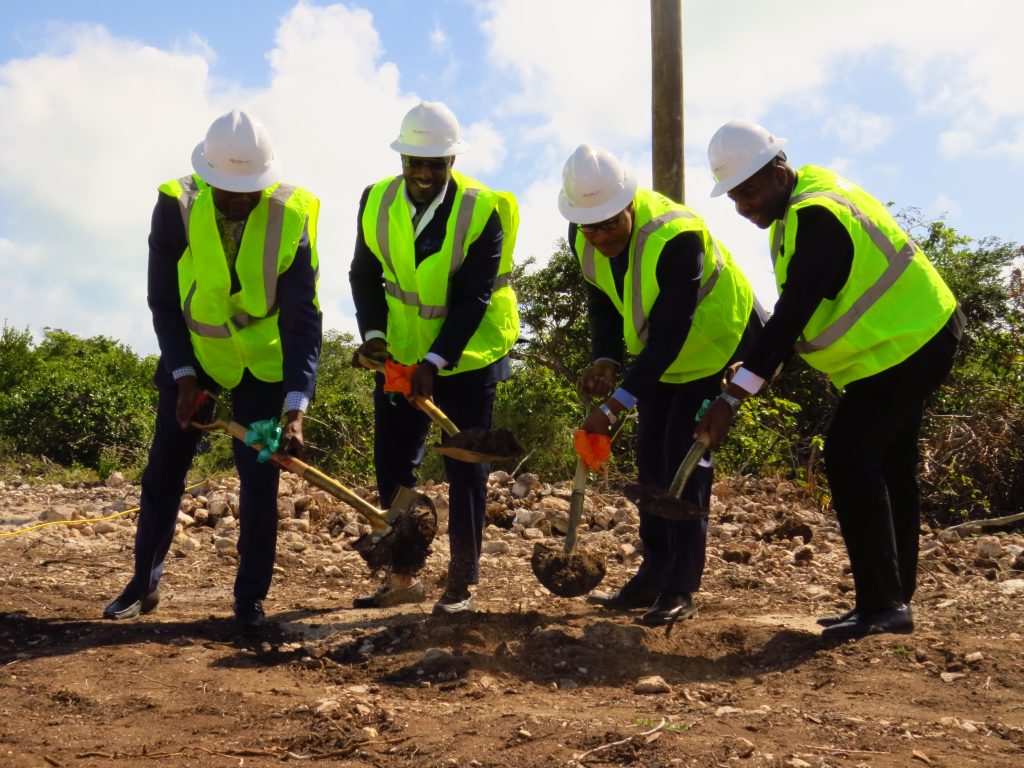 The BVI Electricity Corporation broke ground on a major Anegada solar plant last month after more than two years of delays, but no planning application has been submitted for the project and the BVIEC is still keeping secret the nearly $5 million contract awarded to a Maryland-based developer in 2020 after a controversial tender process.

A Dec. 29 ceremony at the project site near the island’s existing electricity plant opened with festive tunes by the Anegada Methodist Church Steel Pan Orchestra.

Then several officials took the podium, explaining that the project is intended to make the territory more environmentally friendly while providing more reliable service to Anegada residents.

“All our people on all our islands, regardless of their distance from Road Town, deserve the best amenities, the best service from the government, to enjoy the best quality of life and to have the best prospects for their future,” Premier Dr. Natalio “Sowande” Wheatley said of the Anegada Hybrid Renewable Energy and Battery Energy Storage System Project. “By making the transition to renewable energy on Anegada, it will be saving you, the taxpayers, money.”

BVIEC General Manager Leroy Abraham explained that the project was delayed by pandemic-related issues, with a previous completion target of November 2021 now bumped to November 2023.

But he added that contractor Power52 Clean Energy Access LLC is excited for work to get under way.

Deputy Premier Kye Rymer, who is also the minister of communication and works, said the 2.1 megawatt-capacity project will help reduce diesel-produced electricity by 95 percent on the island.

Because Anegada is not connected to the main electrical grid serving 11 other islands in the VI, the BVIEC subsidises the cost of electricity for its residents, he added.

“Because of this, the revenue derived from Anegada does not cover the cost of maintaining its operations, particularly considering the cost of fuel for Anegada is significantly higher than the fuel used to produce electricity on the main grid,” he said.

Power52 CEO and Co-Founder Rob Wallace Jr. also took the podium, telling attendees he believes it is important for the project to be built and managed by community members.

He then welcomed to the stage graduates from the Power 52 Caribbean Energy Institute, a solar technician training programme he previously launched in collaboration with H. Lavity Stoutt Community College in January 2021.

Despite the optimistic tone last month, the solar project has not come without controversy.

When BVIEC officials announced in July 2020 that Power52 had been chosen to build the plant, VI leaders defended the choice even though it sidelined two local firms that also bid on the project.

But three of the four losing bidders told the Beacon a very different story, painting a picture of a bidding process that lacked transparency and bypassed standard tender procedures outlined in the 2005 Public Finance Management Regulations.

The process also departed from the BVIEC’s usual practice for awarding major contracts: Instead of requiring offers to be submitted in sealed envelopes and opened in public, the utility asked bidders to email them to an unnamed consultant based abroad.

And Mr. Wallace, the Power52 founder, has been sued repeatedly in Maryland, where courts have ordered him to pay more than $1.2 million to people who allege that he defrauded them, broke his contracts, and refused to pay his bills, among other alleged misconduct sometimes associated with work similar to the project he was contracted to carry out on Anegada.

In previous interviews with the Beacon, Mr. Wallace roundly denied most of the allegations against him in seven lawsuits stretching back more than a decade, saying they stemmed from a small fraction of his projects, the vast majority of which he claimed were successful. He also maintained that the troubles would soon be behind him, after instilling in him a resolve and vision crucial to his VI endeavours.

“Everything that I went through … has built me and prepared me for what I’m doing now, which is investing in people; which is empowering nations by empowering people,” he said in a 2021 interview.

Meanwhile, the BVIEC’s $4,687,944.72 contract with Power52 — which was executed in November 2021 after various delays — has not been made public despite nearly two years of requests from the Beacon to the BVIEC and the Premier’s Office.

This week, Mr. Abraham responded to emailed questions about the contract but didn’t respond to a request for the contract itself or for an explanation of the BVIEC’s longstanding refusal to provide it.

The contract, he wrote, is an “engineer, procure and construct (EPC) contract” that will be “self-financed by BVIEC, and the funds will come from regular operations. Therefore, for the avoidance of doubt, BVIEC is the owner of the micro-grid and will ultimately be responsible for its operations and maintenance upon completion of construction and commissioning.”

Chief Planner Gregory Adams told the Beacon on Tuesday that no planning application had been submitted to the Town and Country Planning Department for the solar project. He did, however, note that the BVIEC had inquired about the procedure for filing in December and said he expects an application to be submitted.

Asked if a planning application should have been submitted already, Mr. Adams said, “It’s hard for me to say because I don’t know that much about the project.”

During the Dec. 29 ceremony, Mr. Rymer said the territory’s long-term goal is to utilise renewable energy for 70 to 80 percent of its total power usage.

“This is a major step forward,” he said of the Anegada project.

“As we transition to renewable energy for all the Virgin Islands, we will be moving to energy resilience and energy security,” he said. “When this project is commissioned, Anegada will have a more reliable supply of electrical energy.”

Mr. Abraham said during the ceremony that it made sense to designate Anegada as the site of the territory’s first large-scale renewable energy project not only financially and topographically, but also because the BVIEC hopes such efforts will help to preserve the pristine nature of the sister island. He added that the BVIEC is “well advanced” in pursuing a similar project at Paraquita Bay on Tortola with support from the Canada government-supported Energy Sector in the Caribbean Fund. He said partners are simply awaiting the execution of a land lease.

“I can assure you, by this time next year we’ll be using those shovels to break ground for the commencement of that project,” he said.