Officials didn’t just break ground on the new National Emergency Operations Centre site in McNamara on last week. They also broke the building that it will replace. Premier Andrew Fahie …

END_OF_DOCUMENT_TOKEN_TO_BE_REPLACED 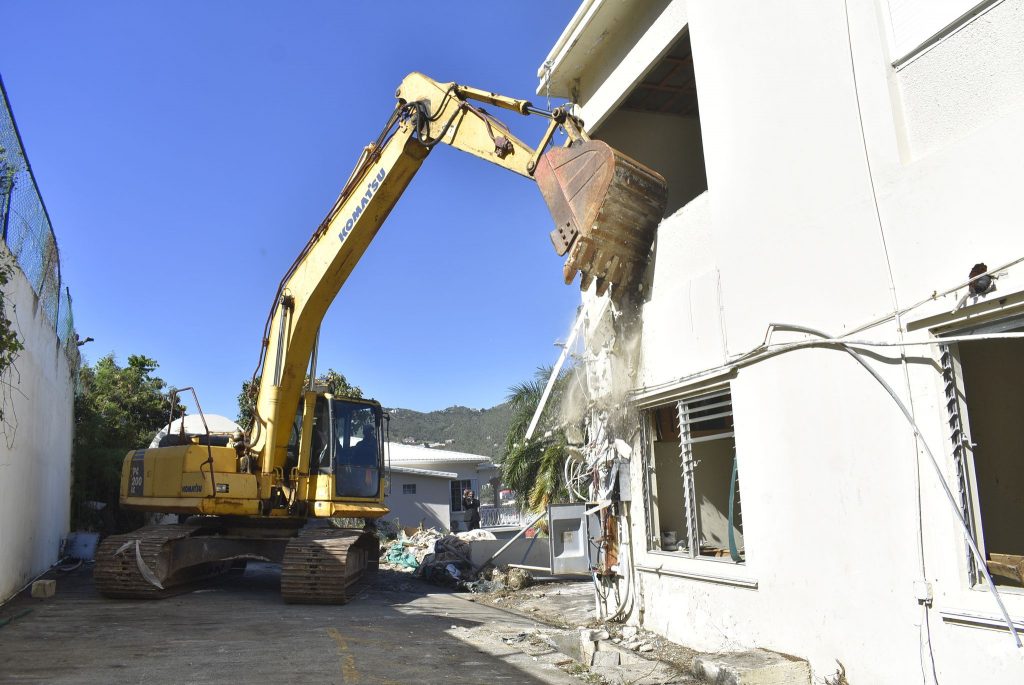 During a ceremony last week, Premier Andrew Fahie drove an excavator and smashed part of the hurricane-damaged National Emergency Operations Centre building, which will be demolished in the coming days. A new state-of-the-art centre will be built in its place. (Photo: ZARRIN TASNIM AHMED)

Officials didn’t just break ground on the new National Emergency Operations Centre site in McNamara on last week. They also broke the building that it will replace.

Premier Andrew Fahie climbed into an excavator and smashed part of the existing facility during the conclusion of an afternoon ground-breaking ceremony.

The building, which was destroyed by Hurricane Irma in 2017, will be fully demolished in the coming days.

Officials said the new NEOC won’t be ready for about two years, but they added that it will be state-of-the-art and able to withstand future disasters like hurricanes and earthquakes.

Jasen Penn, acting director of the Department of Disaster Management, recounted his experience working at the former NEOC during Irma.

The building was largely destroyed in the first half of the storm, and all 25 people inside evacuated during the eye.

“After ripping through the fences and trees and dealing with injured staff, … we had finally found the next place to shelter for the second half of the storm,” he said. “If we had not moved, we would’ve not been alive today.”

He also thanked the premier for making the new NEOC a priority.

Then Mr. Fahie climbed into the excavator and began the demolition process.

The project has been a long time coming. Previous plans for the building were originally drawn up in 2010.

That year, architectural designs, engineering drawings and geotechnical studies were completed and submitted for a $4.3 million, 17,762-square-foot building designed to withstand various types of natural disasters.

However, Cabinet never approved funding for the project in spite of repeated warnings from then-DDM Director Sharleen Dabreo-Lettsome that the DDM’s McNamara headquarters — which served as the NEOC — couldn’t withstand a major storm.

When Irma destroyed the building in September 2017, she was proved right.

After the hurricane, the NEOC temporarily relocated to the Dr. Orlando Smith Hospital, and then to the Ritter House on Wickhams Cay II. More recently, DDM has been operating out of a space in Simms Mini Mall in Road Town.

“It has been a long road,” Ms. Dabreo-Lettsome said on Tuesday.

Earlier this month, government signed a $9,803,215.53 contract for the project, which will be funded by the Caribbean Development Bank’s Rehabilitation and Reconstruction Loan.

Out of six tenderers, VI-based companies Tandem Development and D&B Heavy Equipment Services Ltd. successfully bid on the project and will work on it together, according to government.

The 18,028-square-foot building was designed by the Puerto Rico firm Virella, Crespo and Associates to meet the new International Building Code and the Organisation of Eastern Caribbean States Building Code, government explained.

It is also expected to meet the Leadership in Energy and Environmental Design standard, which is a green building certification programme used worldwide.