The first of the group known as the “liberated Africans” arrived in the territory in 1811 and were indentured to various residents around the territory, said Dr. Catherine Smith, president …

END_OF_DOCUMENT_TOKEN_TO_BE_REPLACED 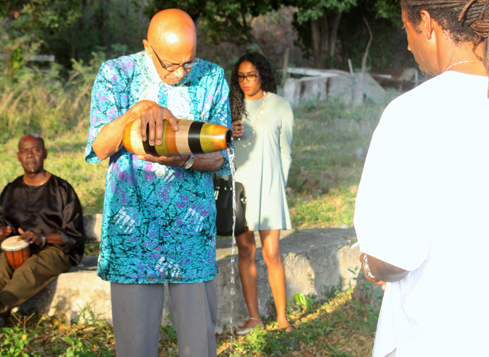 Gil Trott pours ceremonial libations for the ancestors during the groundbreaking ceremony for the restoration of the burial grounds at St. Philip’s Church in Kingstown. Photo: CHRYSTALL KANYUCK

The first of the group known as the “liberated Africans” arrived in the territory in 1811 and were indentured to various residents around the territory, said Dr. Catherine Smith, president of the Association for the Preservation of Virgin Islands Heritage.

Subsequent years saw more arrivals, and the group grew, eventually establishing the village of Kingstown, erecting the St. Philip’s Church, and burying their dead in the little church’s grounds.

Today, despite the group’s significance as one of the region’s earliest populations of free black people, the members of the group are “unnamed and unmarked,” Dr. Smith said.

APVIH wants to change that, transforming the burial grounds at the historic church into a memorial for those buried there.

“We really hope to be commemorating their presence,” she said at a groundbreaking ceremony for the group’s project to restore the burial grounds.

At the moment, the burial mounds look like so many piles of red-brown rocks, and the grounds periodically fill with foot-high weeds.

In the future, the graves will have stone markers, and the grounds will have benches and a walkway, Dr. Smith said, adding that the features will help educate residents and visitors about the liberated Africans’ lives “as free people here in the Virgin Islands, and the impact they had on Virgin Islands history and culture.”