Rain showers were unrelenting on Saturday morning, but so were members of the Nevis Alliance Progressive Society and the Virgin Islands Alzheimer’s Association, who braved the wet weather in order …

END_OF_DOCUMENT_TOKEN_TO_BE_REPLACED 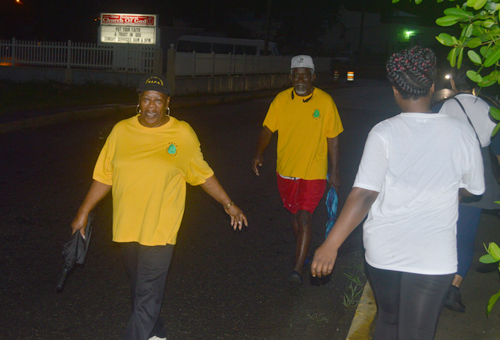 Clad in white or yellow shirts, about a dozen representatives from the organisations walked from the Noel Lloyd Positive Action Movement Park to the CSY Dock and back during an event organised by the NAPS.

“This is the way they are showing support to the [VIAA],” said Edna Williams, who heads the VIAA. “The rain deterred a lot of people, unfortunately.”
NAPS President Yolande de Castro agreed.
For the past 14 years, the organisation has held walks to raise funds for various charities in the territory, she explained.
“Our main focus is to give back to the BVI community first,” Ms. de Castro said, adding that the group often assists needy Nevisians in the VI.
At the end of the walk, Ms. de Castro presented a cheque of $1,500 to the VIAA.