The same contractor who originally built the Captain Owen G. Harrigan Visitor Centre in 2005 said he took great pride in seeing the refurbished building ready to serve travellers in …

END_OF_DOCUMENT_TOKEN_TO_BE_REPLACED 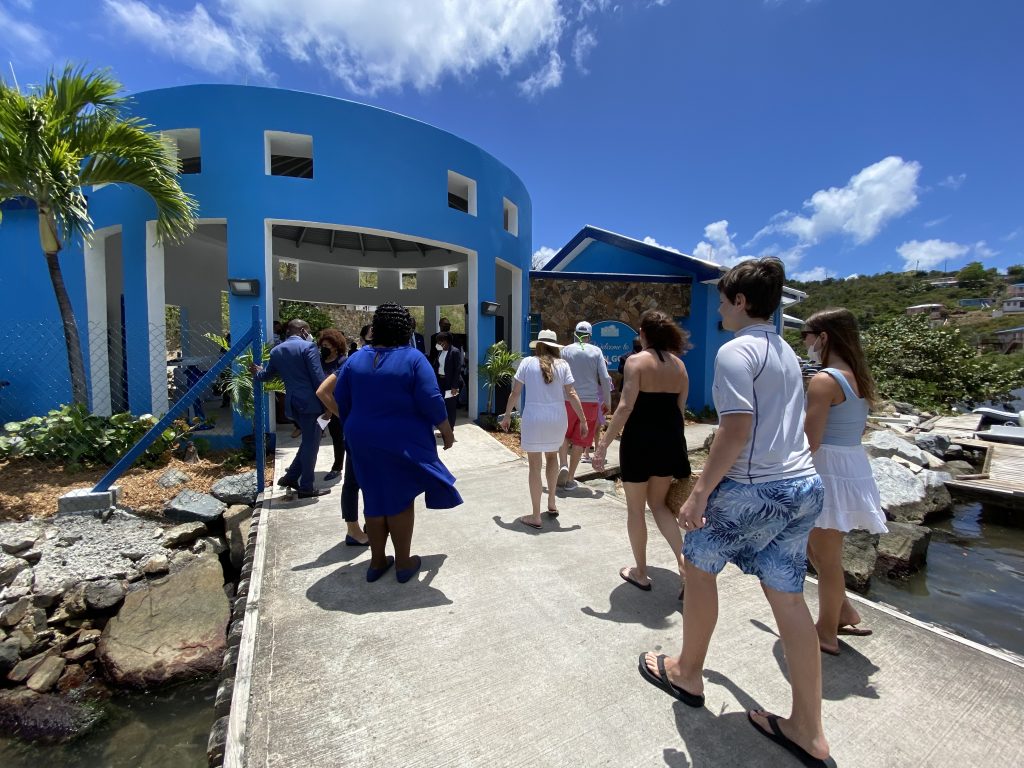 “We had a lovely day for the reopening, and it was well supported,” Cecil Penn, owner and manager of Penn’s Heavy Equipment and Construction, said after the ceremony held April 12 at the Gun Creek facility.

The centre, which became a port of entry in 2012, was damaged by the 2017 hurricanes. Windows were blown out and rails were damaged, but fortunately the main structure held strong, he said.

Now, the open-air building has a new roof, upper deck overlooking the harbour, and a fresh coat of blue paint.

And it is once again functioning as an international port of entry.

Premier Andrew Fahie said at the celebration that he appreciated community members’ patience and assistance as they dealt with poor conditions at the centre and other important buildings like administrative complexes and schools. Taking time to celebrate progress in the territory’s ongoing recovery is important, he said, and he thanked everyone who helped rebuild this community asset.

Government leaders described the centre’s reopening as a catalyst for future development in the Gun Creek area.

Natural Resources, Labour and Immigration Minister Vincent Wheatley — who is also the District Nine representative — said he hopes the reopening of the visitor centre will aid in the growth of restaurants, hotels and other businesses run by the community members who live there.

“The Gun Creek harbour development cannot be just this area right here,” Mr. Wheatley said, gesturing out the windows of the centre to the water. “It’s too small for the vision and for the potential of the people of North Sound. This harbour must be expanded out.”

Additionally, Mr. Fahie said seaplanes should be able to once again land in the nearby waterway within the next six months. He said the waterway must first be cleared of debris to ensure the safety of the planes.

The ministers offered their compliments to BVI Ports Authority staff for working hard to rebuild many of its facilities that were damaged by the storms.

BVIPA Managing Director Oleanvine Maynard and Board Chairman Kelvin Hodge said it was challenging to get the project to this point, but staff remained committed.

“Today, through this facility, we can officially welcome the return of domestic and international yachting and ferry traffic to Gun Creek,” Mr. Hodge said. “This is certainly an important moment for the people of Virgin Gorda and the BVI Ports Authority. It is truly something to celebrate.”

Among those in attendance on April 12 were family members of the building’s namesake, Mr. Harrigan. He was born in 1929 and was known for providing transportation throughout the Virgin Islands and surrounding area, often on his own dime.

A bronze plaque from when the building was first dedicated on Feb. 25, 2005 adorns the refurbished centre and describes the journeys his sloop, the May C, made to carry fresh fish to Tortola and St. Thomas.

“Captain Harrigan showed courage and skill as a seaman, making trips in his 16-foot sloop as far as Dominica,” the plaque reads, adding, “Captain Owen Harrigan will be fondly remembered by the many visitors, guests and staff of Biras Creek, where he worked as a boat captain until his passing on the 30th December, 2000.”