During a final meeting with the press before the end of the year, Governor Gus Jaspert gave updates on various issues in the territory, as well as a year-in-review that …

END_OF_DOCUMENT_TOKEN_TO_BE_REPLACED 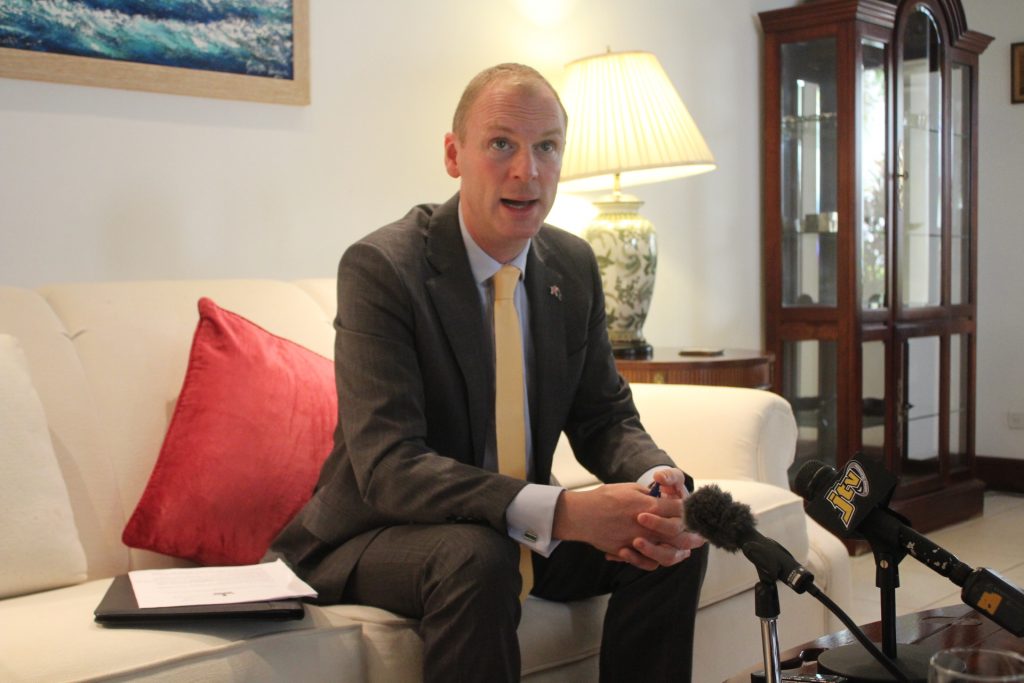 Journalists were invited to the Governor’s House, where he provided a year-in-review of 2019, including recovery efforts. (File Photo: ZARRIN TASNIM AHMED)

During a final meeting with the press before the end of the year, Governor Gus Jaspert gave updates on various issues in the territory, as well as a year-in-review that touched on the February election of a new government.

“I think we can all agree that 2019 was a year of change,” he said.“We’ve seen a lot of different things in the territory — not least with the advent of the new administration under the stewardship of Andrew Fahie.”

Mr. Jaspert commented on electronic voting that took place in the territory for the first time, as well as calling campaign rallies an example of the “vibrant democracy” in the territory.

Moving into discussion about the recovery effort, the governor commended progress so far, but said that he hopes to see the recovery “go into full swing” next year.

“We have all of the structures there with the Recovery to Development Agency,” he said. “We need to make that progress turn into tangible improvements.”

Mentioning £10 million that was donated by the United Kingdom government to the territory to support infrastructure follow- ing the devastation left by hurricanes Irma and Maria, the governor made note of improved sewerage, water, electricity, roads, and public safety structures like police barracks.

“Since then we have seen little by little gradual movements in the territory as we head towards recovery,” Mr. Jaspert said.

These improvements included the end to a shift system in the Elmore Stoutt High School, as well as permanent facilities for students, according to the governor.

Tomorrow, he said, the administration building on Jost Van Dyke will open.

The governor said one of the most important future projects is a “modern and effective infrastructure for [our] justice system.” To that end, he made reference to plans for the “Halls of Justice” project that Mr. Fahie recently announced.

The Magistrates’ Court facility in Johns Hole sustained ex- tensive damage and has been inoperable ever since. A temporary structure was commissioned and constructed in July 2018 to accommodate court sittings.

The ongoing project is being funded under the Rehabilitation and Reconstruction Loan from the Caribbean Development Bank, which was secured by the government to assist with the hurricane recovery.

The governor expressed excitement over the Governor’s House Museum, which he said had many volunteers come to help clean the garden and set up for fundraisers.

“Progress is being made and I’m delighted,” he said. “The plan is to try to open January, February time. We are shortly to report a contract for the repairs to the museum itself. That will be a positive in 2020.”

In February, the governor, his wife Millie, and the museum board of directors ex- plained that they are embarking on an ongoing initiative to raise $500,000 to restore the museum, which sustained heavy damage in Irma.

The building, which housed administrators and governors from the 1890s until 1996, was previously home to a varied collection of art, antique furniture and other artefacts, many of which were either destroyed or moved to storage, leaving the walls mostly bare.