The Drake’s Landing Project in Havers has been continuing slowly since early May, with more land reclaimed to form a landmass jutting into the waters off the coast of Tortola. …

END_OF_DOCUMENT_TOKEN_TO_BE_REPLACED 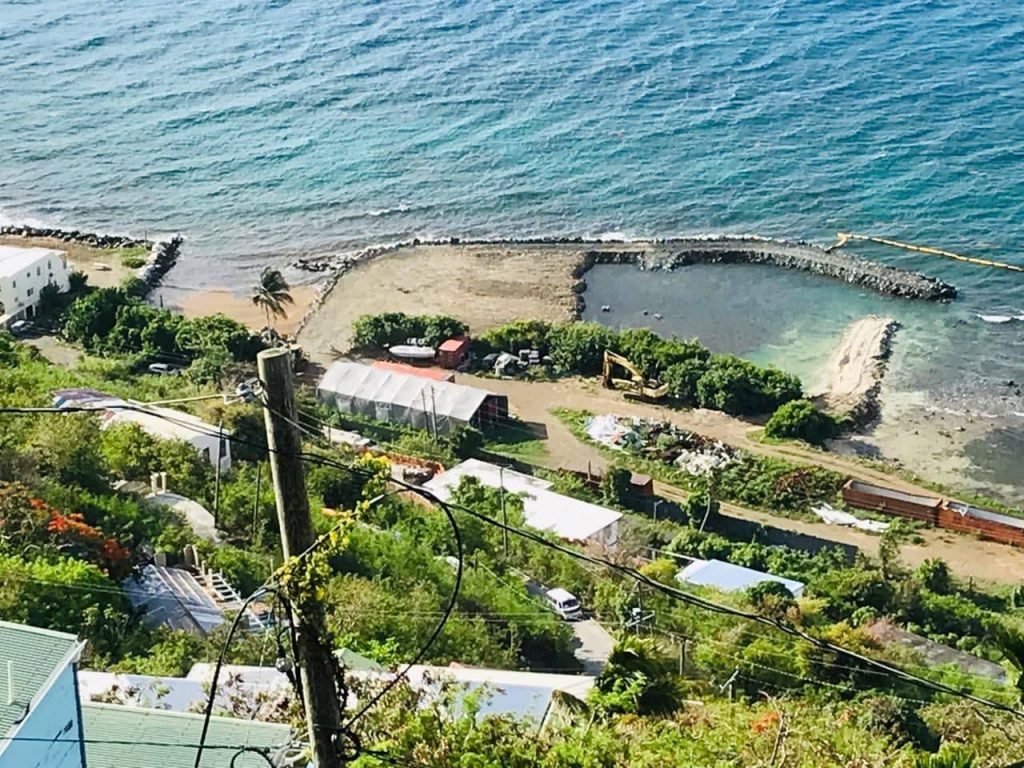 Work on the Drake’s Landing Project in Havers has continued as developers reclaimed land off the coast of Tortola, but the site is quiet for now. (Photo: Provided)

The Drake’s Landing Project in Havers has been continuing slowly since early May, with more land reclaimed to form a landmass jutting into the waters off the coast of Tortola.

A Havers resident noted that work went on for a few days within the last month and has since been quiet.

What started on April 24 as a thin L-shaped jetty of mostly rocks has now been filled in completely with land on one side, forming a new landmass off the coast.

The land reclamation was halted by the Town and Country Planning Department in late April.

Chief Planner Greg Adams said at the time that the developers still needed to meet certain requirements of their Environmental Management Plan before proceeding.

“There’s some feedback we’ve given and are waiting on the EMP,” he said at the time. “Once that’s done, they’ll have the green light.”

Shortly thereafter, the developers were given the green light to begin construction after fulfilling all requirements, according to Mr. Adams.

“I believe all of that was dealt with, so I don’t know what they are waiting for,” he said Tuesday. “We’ve had no further contact with [the developer], so nothing has changed since then.”

Project Director Robert Wong said yesterday that he is in “no rush” and that he is “taking [his] time to do things properly.”

“I need an investor that understands what I’m doing, not just people who are in it for the money: I don’t entertain those guys,” he said. “Whoever wants to take their time and help, I’ll accept it.”

The Drake’s Landing Project has been in the works since 2015 when Mr. Wong announced plans to build a $70 million resort and residential community along the coastline in Havers.

Since then, some details have shifted.

During a public meeting in July 2018, Dr. Cassander Titley-O’Neal, director of Environmental Systems BVI, who completed the environmental impact assessment for the project, said the amount of planned reclaimed land had been reduced from 8.6 acres to 4.2 acres.

Other aspects of the development, however, had grown.

Developers have said that the project will bring jobs and a much-needed boost to the economy, as well as helping expand the tourism industry.

But during public meetings, some residents have criticised the plan, expressing concerns about whether the area, which is close to Nanny Cay, wants or needs another marina, and about what would happen to the existing homes nearby.

After work was stopped by TCPD last month, Mr. Wong insisted that the territory “desperately needs development” and said the project was under way.