Health training to start next week

On Tuesday, government launched a 10-week health programme targeted at preventing and managing chronic diseases, and encouraged residents to register for the first sessions starting next week on Virgin Gorda …

END_OF_DOCUMENT_TOKEN_TO_BE_REPLACED 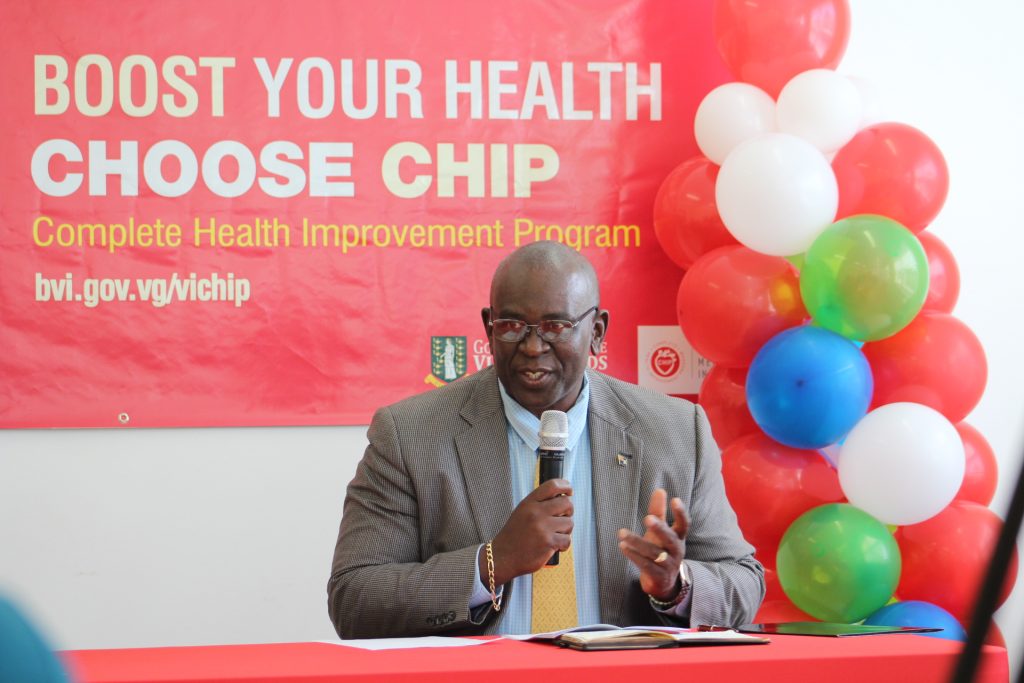 Health and Social Development Minister Carvin Malone spoke at the launch of the Complete Health Improvement Pro- gramme on Tuesday, pledging $30,000 in grants to residents who want to take the 10-week course. (Photo: ZARRIN TASNIM AHMED)

On Tuesday, government launched a 10-week health programme targeted at preventing and managing chronic diseases, and encouraged residents to register for the first sessions starting next week on Virgin Gorda and Tortola.

“We are embarking on a programme for increased population wellness,” said event chair Cromwell Smith, also known as Edju En Ka. “It’s extremely important for the enhancement of the quality of life as well as healthcare cost reduction.”

“The Ministry of Health signed a two-year contract with Lifestyle Medicine Institute to offer this programme throughout the territory,” said Health and Social Development Minister Carvin Malone. “The ministry has also facilitated the training of an impressive mix of 22 local healthier lifestyle enthusiasts.”

Participants will take part in video calls with health experts including Dr. Hans Diehl, who founded the CHIP in California in 1987. Dr. Diehl earned a Doctor of Health Science degree in lifestyle medicine and epidemiology from Loma Linda University in California, where he is a professor of preventive medicine.

The programme will begin on Tuesday in the East End/Long Look Community Centre from 6-8 p.m.

Also on Tuesday, the Virgin Gorda programme will kick off at the Village Cafe conference room.

On June 30, a programme will begin in Road Town, followed by another in Jost Van Dyke on July 8. Two programmes also will be held in Her Majesty’s Prison, and a virtual course will be offered eventually, Mr. Malone added.

CHIP committee chairwoman Delma Maduro secured a $10,000 grant from the territory’s Rotary clubs, which will provide 100 scholarships of $100 each, Mr. Malone said.

Out of a $300,000 fund provided to each representative on May 28 as part of the second phase of the government’s economic stimulus plan, Mr. Malone said he would allocate ten percent of his funds toward the programme.

Mr. Malone warned that there would be no “double-chipping” from the grants, and those who are awarded a grant cannot ask for additional assistance.

The programme is just one step in a long-term strategy to help address chronic diseases in the territory, Mr. Smith said.

In 2009, he explained, a STEPS Noncommunicable Disease Risk Factors Survey showed that more than 47 percent of the Virgin Islands population had one or more chronic diseases.

In the Caribbean and Americas, he stated, 65 percent of annual health expenditures are used to manage chronic diseases.

“This is daunting,” he said. “In the [VI], over $80 million has been expended on healthcare for the last five years every year, at least. And over 60 percent of these expenditures come from the top five chronic diseases that we have in the territory, namely cardiovascular disease, hypertension, diabetes, cancer and kidney disease.”

The programme will encourage participants to move toward a plant-based diet, limiting consumption of meats and processed foods, he explained. It will also address physical inactivity and other lifestyle choices that are detrimental to health.

One of the effects of such changes includes a stronger immune system, said Julia Leonard, a CHIP facilitator, singer, and member of the Tortola Toastmasters.

“I remember before taking the CHIP journey, one of the things that used to happen to me is that I used to be sick with a cold often,” she said. “After adopting a plant-based lifestyle, I do not suffer from colds and flus 16 years now. That is how a plant-based [diet] can build your [immune] system, something we are all hearing about in ‘coronaville.’”

She encouraged residents to sign up for the programme, which consists of 18 in-person sessions that last about two hours each.