High schools to get new buildings

Starting in September, there will be an extra grade level in all public high schools. To help accommodate the influx of students it will bring, government will hire more teachers …

END_OF_DOCUMENT_TOKEN_TO_BE_REPLACED 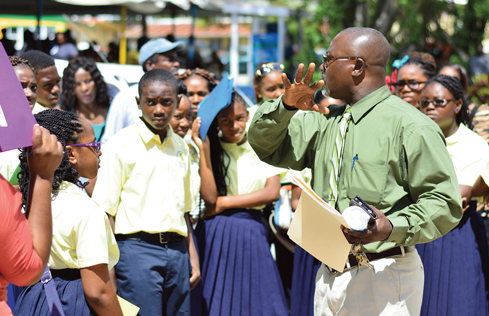 Starting in September, there will be an extra grade level in all public high schools.

To help accommodate the influx of students it will bring, government will hire more teachers and build more classrooms, Education and Culture Minister Myron Walwyn said this week.

Construction has not begun on the projects, but a master plan has been submitted to the Town and Country Planning Department, Mr. Walwyn said in an interview yesterday.

He added that he is “pretty confident” the facilities will be constructed by September. The minister also noted that $3 million was earmarked this year for the ministry’s capital expenditures, the vast of majority of which will be devoted to the new classroom buildings.

Mr. Walwyn also said there have been allowances made to hire new teachers to account for the increase in students, but he was uncertain exactly how many would be needed.

He stressed the importance of “maximising the usefulness” of the existing workforce, and said teachers may see an increase in their workload.

Leaders have been making — and changing — plans to improve high school facilities for at least a decade.

In 2006, the National Democratic Party announced its intention to build a new high school on the eastern part of Tortola, and the following year then-Chief Minister Dr. Orlando Smith announced Paraquita Bay as the site.

A plan was drafted, but it was shelved after the Virgin Islands Party took over the government in August 2007. Instead, then-Education and Culture Minister Andrew Fahie said government hoped to have the former plan — which he said cost $1,624,174 — adjusted for use in Road Town.

In May 2009, Mr. Fahie revealed that government was in discussions with contractor STO Enterprises to build the new school at the existing ESHS campus.

Two years later, he said that the former plan was still being adjusted, adding that all but the newest buildings on campus would be replaced and that construction would happen in phases so students could continue to attend classes.

After the NDP returned to power later in 2011, however, government changed course again. Mr. Walwyn said in 2013 that plans for a new school had been suspended due to budget constraints, and instead work would go toward improving the current ESHS campus.

He said yesterday that the current eight-acre campus provides more than enough land for the plan they are working on.

“The problem that we’ve had at the high school is that if you look at it, you can see all the buildings are spaced out,” he said. “And it looks like the buildings were just placed down without any view of a master plan according to the layout. And we’re trying to really properly utilise the entire space.”

This article originally appeared in the April 21, 2016 edition.