The afternoon sun blazed as a group of nearly 30 people set out for a hike along the 99 Steps trail in Virgin Gorda last Sunday. Spanning Long Bay and …

END_OF_DOCUMENT_TOKEN_TO_BE_REPLACED 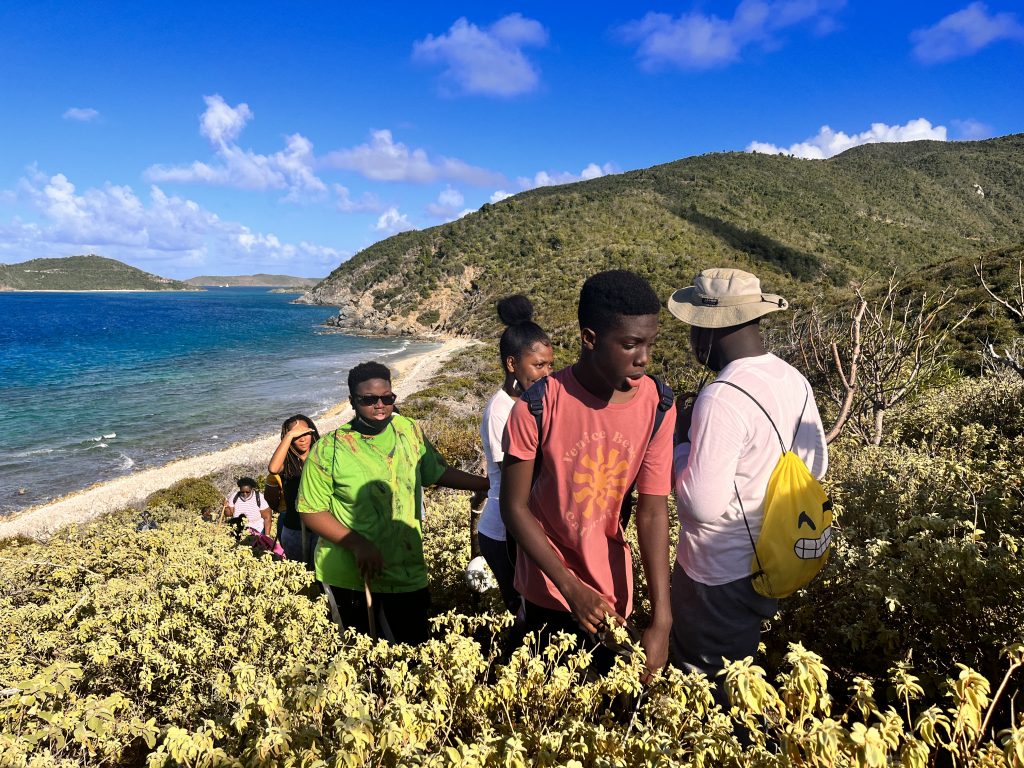 Hikers from the Pathfinders and the Virgin Gorda African Studies Club trek up the “99 Steps” trail in Virgin Gorda. The hike was one of several events held in the territory in observance of Black History Month. (Photo: ZARRIN TASNIM AHMED)

The afternoon sun blazed as a group of nearly 30 people set out for a hike along the 99 Steps trail in Virgin Gorda last Sunday.

Spanning Long Bay and part of Nail Bay, the hike included stops at “Devil’s Hole,” with views overlooking the eastern end of Tortola in the distance.

“It’s a perfect place for a look-out,” said Ronald “Lucky” Clifton, owner of Off the Grid Hikes and Tours in Virgin Gorda.

“There are two plantations here,” said the former National Parks Trust employee, pointing toward Nail Bay while gathering with other hikers. “We’re going up the steps now. That used to be where the masters used to have their houses looking down at the plantations.”

The Sunday hike was one of two organised over the weekend by the Virgin Gorda African Studies Club in observance of Black History Month.

“The principle of the thing is to make the residents of Virgin Gorda and nationals more sensitive to Afrocentric history,” he said. “I recognise there are a lot [of ] … ruins all over Virgin Gorda that were never looked at or studied. Most people on Virgin Gorda never knew there was a place called 99 Steps. It’s very remote.”

Though Mr. Fenty didn’t at- tend the Sunday hike, he said it was “an excellent example to showcase the history and beauty [of Virgin Gorda].”

The trail begins along the shore of Long Bay and proceeds to steps leading to the top of a rocky point.

Hikers said they counted more than 99 steps that were carved out in what Mr. Clifton guessed were the 1800s. Once reaching the summit, the trail led back down toward an undeveloped beach.

The group continued along the beach, reaching another trail that took them to a point called “Devil’s Hole,” a narrow opening of water surrounded by steep cliffs.

Hikers looked down at the waves crashing into the rocks before continuing on the trail, which eventually led back to the beach of Long Bay.

The rest of the hike included climbing over rocks along the shore before the group convened back at the starting point.

Tresan Sharpe was among the first to finish.

“[My friend and I] kept in touch, so every time they have a hike they send it to us,” she said. “Since we’ve been in the group, they’ve had three hikes, and this is our third.”

Kids on the trail

Most of the other hikers were children who are members of the Pathfinders, an international organisation for youth sponsored by the Seventh-day Adventist Church.

Pathfinders were told to use the buddy system and hike the trail in groups of two. They came equipped with walking sticks, backpacks, water and hats.

Ms. Sharpe said doing the hike in commemoration of Black History Month was significant for her.

“I’m black,” she said. “My family is black. Our ancestors fought for a lot.”

The observance of Black History Month culminated on Sunday as residents were encouraged to wear cultural clothes celebrating their African ancestry.