At 11 a.m. on Friday, Jonathan Hing was already ahead of the game. As around 50 of his fellow jobseekers wandered around, he had filled out an application from The …

END_OF_DOCUMENT_TOKEN_TO_BE_REPLACED 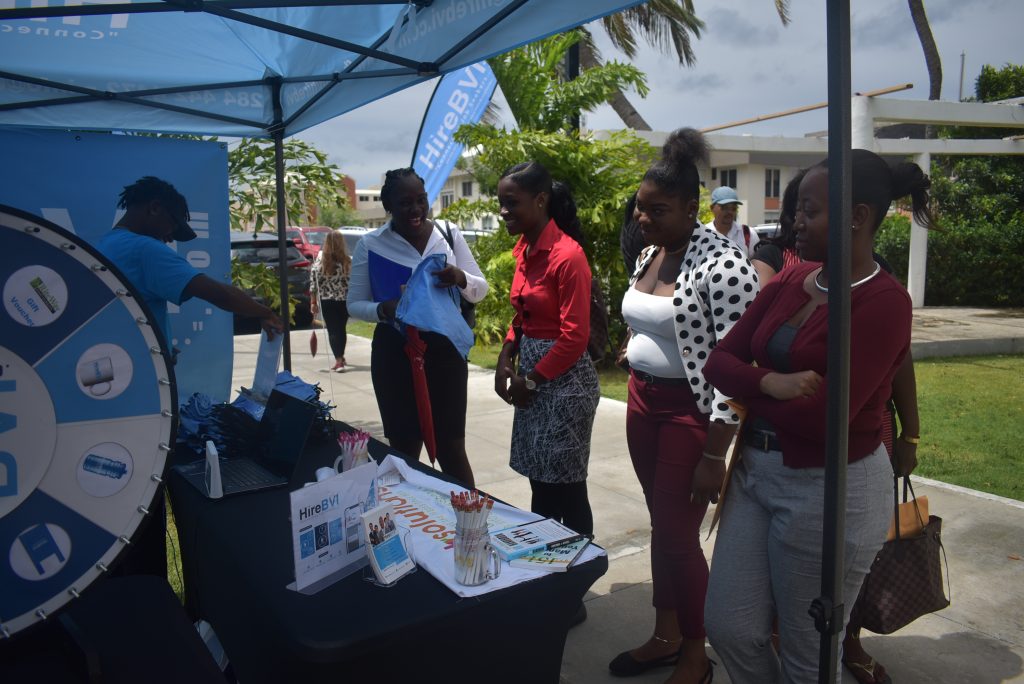 At 11 a.m. on Friday, Jonathan Hing was already ahead of the game. As around 50 of his fellow jobseekers wandered around, he had filled out an application from The Moorings to be a shipwright and stood waiting to submit it.

That industry was well represented among about 30 businesses at the Hire BVI Career Expo at the Noel Lloyd Positive Action Movement Park, but fields ranged from beauty care to security to tourism to food service to law to accounting.

Rekeema Turnbull, CEO of Hire BVI, which launched in 2015, said the company has always aimed to connect jobseekers with employers.

“We realise that there are many unemployed persons in the BVI and we feel that we could help bridge that gap,” she said, encouraging the dozens of jobseekers present to learn all they could from a human resources staffer there to brief them on tips to help present themselves well to employers. “It’s not only for those seeking employment, but for those seeking to learn how you can excel in your career.”

Recent graduate Cinique Henry said she had no idea what to expect when she entered the job fair. Her friend helped her complete an appli- cation for a food service position at Village Cay.

She already has plans for the fall: heading off to Johnson and Wales University in Rhode Island to study business and culinary arts.

“Right now I’m just looking for anything temporary,” she said.

Some employers reported that many of the other jobseekers were fresh from school and seeking entry-level work.

Since Hurricane Irma, the chain has faced difficulties recruiting qualified employees, “but we are getting there,” she said.

While she also recruits in other ways, she added, a job fair offers the chance to educate potential applicants about the breadth of positions the company offers, from directors to app developers to buyers, cooks and cashiers.

“Not everybody knows that we aren’t just a supermarket,” she explained.
RTW, like several of the other employers, had its eye on shoring up numbers of local employees.

“One of our goals this year is to get our BVIslander/belonger status up to 80 percent,” she said. “We’re at 68 percent, so we’re not too far off, but that is our goal.” For attendees looking to- ward the sky rather than toward the ground or the sea, Edgar Hippolite, a clerical officer in the HR department of the BVI Airports Authority, was stand- ing beside a sign that read, “Ask me about becoming an air traffic controller.” He explained that science and math were the skills he was seeking.

“A lot of people don’t really know about it,” he said of the position. “It’s not the most flashy and some people think it’s very stressful and there’s a lot of responsibility.”

Ideally, the authority would like to recruit more Virgin Islanders, who right now make up less than half the BVIAA staff, he said.

Although the airport pays for training, it’s a long road ahead for those interested. “What happens is they begin as a trainee and after being a trainee they get sent off for specific training and formal classwork, simulations and so on,” he explained. “After that, they have to work at another airport and receive official certification.”

However, he said he had seen interest from a few potential applicants and planned to take them to visit the control tower to get a firsthand glimpse.

On the marine side, Polly Banister, recruitment manager for The Moorings, said that despite tourism season being nearly over, response had been strong so far, and customer service and hospitality jobs seemed the most in demand.

“A lot of people kind of turn up and say, ‘Anything,’ but then we try to find out more about what they actually want,” she said, adding that the company never stopped recruiting, even after the hurricane hit them hard. “We are building up as roles become available, so we’re looking for the right people to fill them as we build up further.”

Beyond the shipboard roles, she said, the company is also looking for qualified applicants for technical and finance positions.

“We’re recruiting into the next year,” she said. “We’re always looking for people with talent, people with great skill sets, people who want to work for us in lots of different fields, so when the season starts up again, we’ll be ready for them.”