A 25-foot sloop that could be the oldest existing wooden boat in the Caribbean disappeared from the H. Lavity Stoutt Community College campus on Sunday. Before Hurricane Irma, Vigilant was …

END_OF_DOCUMENT_TOKEN_TO_BE_REPLACED 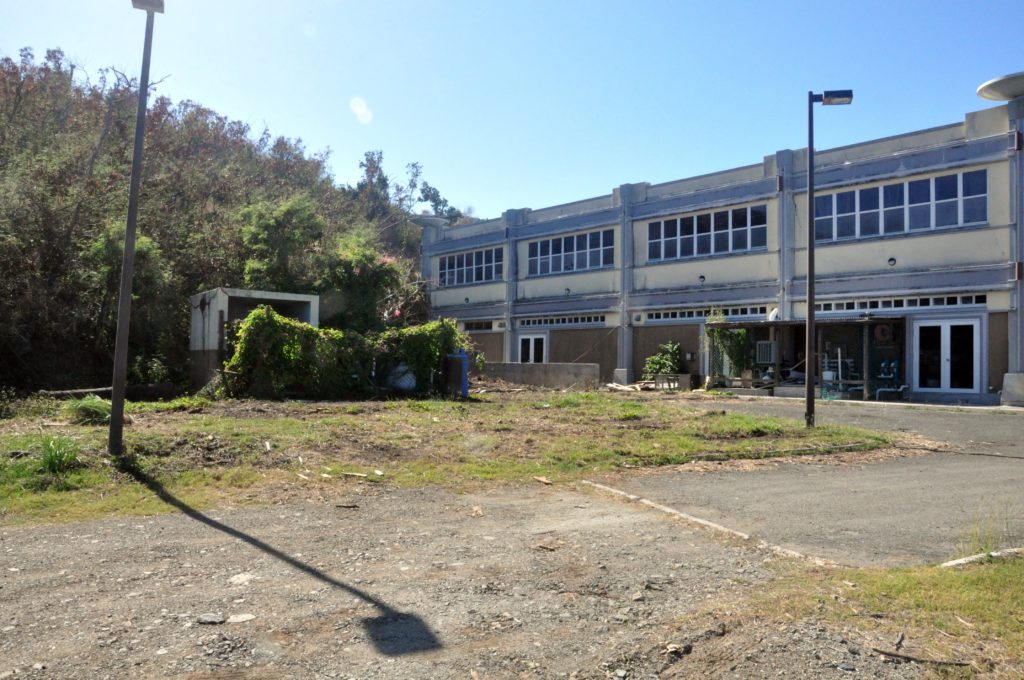 The sloop Vigilant was stored in this space next to the H. Lavity Community College’s Centre for Applied Marine Science until the weekend, when it was removed with no explanation.

A 25-foot sloop that could be the oldest existing wooden boat in the Caribbean disappeared from the H. Lavity Stoutt Community College campus on Sunday.

Before Hurricane Irma, Vigilant was kept under a shed next to the Centre for Applied Marine Science to protect it from the weather as it awaited repairs.

But after the shed was knocked down in the storm, the historic vessel sat freshly damaged and exposed to the elements, with pieces of the wooden shelter strewn around it.

Without warning, the boat was removed over the weekend.

The reason for Vigilant’s sudden removal and its current whereabouts are uncertain.

Dr. Angel Smith — who used to head the Virgin Islands Studies Institute but now is responsible for the overall restoration and recovery of the college — would not confirm or deny if Vigilant was still on campus. A Beacon reporter informed him over the phone about reports that the boat had possibly been thrown away at a dumpsite.

“Whoever you’re talking to, just continue to talk to them,” he said before ending the call moments later.

HLSCC President Dr. Janet Smith wrote Wednesday in an e-mail, “I have also been made aware that the Vigilante [sic] is no longer in its usual location. I am looking into this matter and should be able to provide you with a response shortly.” The Beacon, however, did not receive any further information from Dr. Smith by press time yesterday afternoon.

Dr. Katherine Smith, acting director of the VI Studies Institute, could not be reached for comment, and neither could Dr. Charles Wheatley, the chairman of the HLSCC Board of Governors.

Geoffrey Brooks, curator of the VI Maritime Museum, declined to comment, and government Culture Director Luce Hodge-Smith said she was not aware the sloop had been taken away.

“This is news to me,” she said over the phone. “Did you try calling the college?”

Before its disappearance, Vigilant was long overdue for necessary repairs.

The vessel was built by Willie Penn in 1882, though over the next century it took a beating. HLSCC acquired it in the mid 1990s but was forced to retire Vigilant from sailing several years ago.

“She popped some planks during a race and barely made it to the beach because she was sinking,” Mr. Brooks said in a 2016 interview.

Vigilant was eventually moved from its dry-docked position in Nanny Cay to Paraquita Bay. The cost to repair it, however, was steep.

“It would take $40 to $50,000 to fix her up,” Mr. Brooks said at the time. “She would need to be re-planked; her frames would have to be redone. We’ve kind of decided it won’t be worth trying to fix her up to sail again. We should try to fix her up as a big museum display.”

During a November interview, Mr. Brooks said he still had high hopes that Vigilant could be restored as a museum piece.

Before Irma, Nanny Cay had even proposed dedicating a space in its new section for the territory’s sloops and a mini museum of sorts, he said at the time.

“Things are so mixed up right now,” he added. “That would be great, but we have to go one step at a time.”

Five newer sloops — at least one of which dates back to the early 20th Century — are in varying states after Irma.

Dr. Kent went on a scuba diving expedition in November to assess the sunken remains of Youth Instructor, Intrepid and Esmie in Nanny Cay.

All three had gone down in the storm, and the only sign of their existence above the surface was two partially submerged masts.

Luckily, the trio were able to be brought up from the seabed using lift bags placed inside the hull. Intrepid and Esmie are now docked normally, while Youth Instructor, suffering from a large hole, was put on the hard in the far end of the marina.

A fourth sloop named Sea Moon was moved via crane elsewhere in Nanny Cay to await repairs. Mr. Brooks helped craft that vessel with an Anegada shipbuilder in 2003 and wrote a book about the experience.

“It’s 15 years of work down the drain, so to speak,” he said, looking at the splintered boat last fall. “Longer actually.”

The curator hopes that all of the boats will be restored, provided that insurance comes through.

But the last of the sloops, Moonbeam, was “reduced to toothpicks,” Mr. Brooks announced.

“She was totally lost,” he said.