H. Lavity Stoutt Community College Marine Director Dr. Lianna Jarecki took advantage of the recent lockdown to carry out a water-quality study in the territory. “With ports closed and boats …

END_OF_DOCUMENT_TOKEN_TO_BE_REPLACED 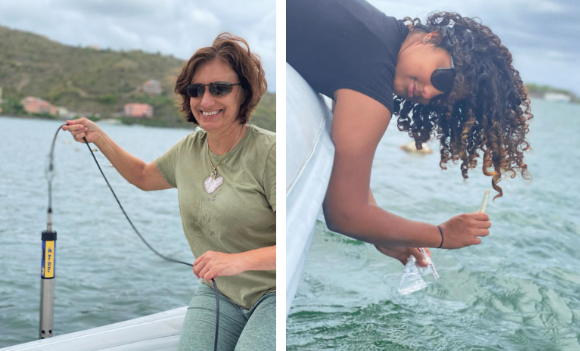 “With ports closed and boats safely berthed, the BVI’s Ministry of Natural Resources recognised an unexpected opportunity and called upon HLSCC to create a baseline water quality profile for the BVI’s coastlines and anchorages,” the college announced in a press release. “A study like this has never been done before and will establish reference points from which to measure future fluctuations in nearshore marine water quality.”

The study will serve as a baseline that will likely help gauge the effects of factors like pollution, climate change, anchor damage, invasive species and intensive fishing, according to the college. This data, in turn, can help guide management decisions.

“This is such a great opportunity for us to monitor and manage marine pollution in the future,” Dr. Jarecki said. “The data is crucial because we are losing so much essential fisheries habitat in the BVI’s nearshore waters”

“Right now, no one is cruising the BVI and very few people are overnighting at anchor,” she said. “Our normally popular moorings fields are nearly empty, so sewage discharge from boats will be minimal or absent. At the same time, typical for April, we’ve had little rain and the ghuts are dry. Sewage from hillside septics won’t, for the most part, be washing down to the sea.

“The only source of sewage in our nearshore waters right now should be from direct sewerage outfalls, and the BVI’s water should be about as clean as it gets.”

When heavy rains return in the future, further water tests can be compared to the baseline that the team is creating. This exercise will help measure that impact of hillside septic tanks, according to the college.

Similar comparisons can be made after ports are reopened and marine-based tourism resumes.

“Without a baseline, we will have no way to detect where sewage pollution is coming from and how much is entering the water,” Dr. Jarecki explained.