In an emergency virtual meeting on July 29, the House of Assembly voted to retroactively exempt Deputy Speaker Neville Smith from vacating his seat after his company Caribbean Security Limited …

END_OF_DOCUMENT_TOKEN_TO_BE_REPLACED 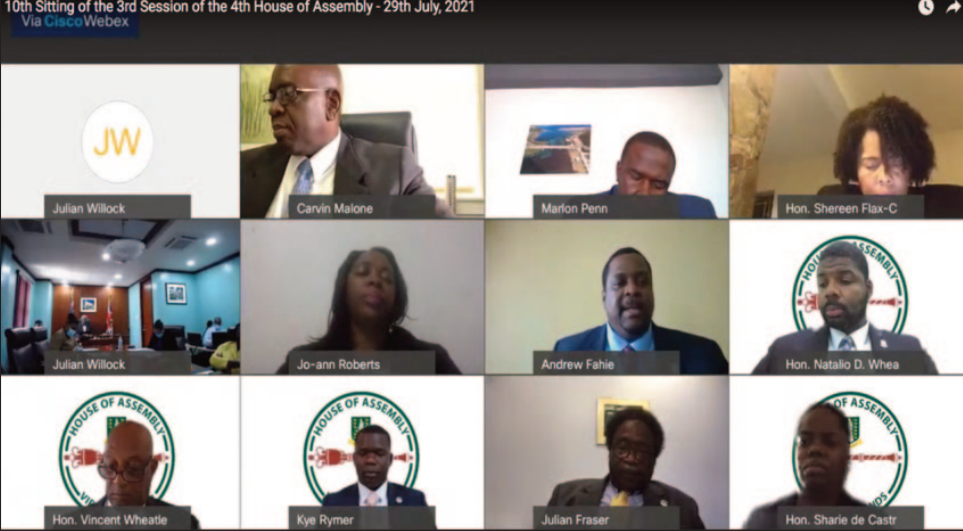 In an emergency virtual meeting on July 29, the House of Assembly voted to retroactively exempt Deputy Speaker Neville Smith from vacating his seat after his company Caribbean Security Limited
entered into two contracts in November and April to supply information technology services to government agencies.

Section 67 of the Virgin Islands Constitution requires HOA members to vacate their seats if they or their company enters into a contract with
government — unless they are exempted by the HOA after disclosing their interest.

According to the Constitution, this disclosure must come before the member becomes “a party to a contract, or before or as soon as practicable after becoming interested.”

In Mr. Smith’s case, the disclosures were included in two resolutions introduced to the HOA on July 29 by Premier Andrew Fahie.

The HOA has met multiple times since last November, but Mr. Fahie took issue with any suggestion that the time period since then wasn’t “practicable.”

“The word ‘practicable’ is another area that I know will cause great debate today,” Mr. Fahie said while introducing the first motion to exempt Mr. Smith. “The member has not violated any law.”

He said with so many different government contracts coming across his desk as finance minister, it was impossible for him to personally check
them all.

“I want the public to know that it is impossible to stop and go and check to see or double check every single public officer to make sure that by the time the contract reaches the minister of finance for signing that all the T’s have been crossed and I’s have been dotted,” he said.

The word “practicable” itself he called “ambiguous,” and suggested it be removed in the next constitutional review.

“I would like to find a lawyer that tells me that practicable means one hour, one second, one minute, one month, nine months, 10 months, 12 months,” Mr. Fahie said.

However, in the debate,  opposition member Julian  Fraser said there is no need to amend the Constitution in this manner.

“You’re exposing yourself. For what reason? There is no reason to expose yourself. It is clear that if you have a contract with a statutory body, it has no reason coming before the House of Assembly for exemption,” he said.

But Opposition Leader Marlon Penn quibbled on the meaning of “practicable,” and suggested that the House seek a formal interpretation of the clause from the attorney general.

According to the order paper for the meeting, Mr. Smith (R-at large) serves as a director of Caribbean Security Limited, which was contracted  for information and communication technology services. On Nov. 26, 2020, the firm received a $99,285 contract for installation of access control, video surveillance and burglar alarms in the Department of Information Technology/Telephone Services Management Unit, the Inland Revenue Department, and the Treasury Department, and for other installation work at Skelton Bay Lots, according to the first motion.

Since both contracts are under the $100,000 mark, they were not required to be put out for tender, the motions noted.

In the June Commission of Inquiry hearings, Mr. Smith spoke about exemptions he received for two contracts signed in 2019, but the
commission did not ask whether he had received exemptions for any other contracts since then, and he did not mention the November
and April contracts.

Testifying before the COI, Mr. Smith said that in 2019, he received an exemption from giving up his seat in the House while one of his businesses, Frontline Systems, carried out a government-related tendered contract for rendering services for August Emancipation Festival celebrations.

However, he said he wasn’t strictly required to seek an exemption because the Festivals and Fairs Committee is a statutory body, but he did so out of an abundance of transparency.

He also said the company had been operating for some time both here and internationally before he got into politics. He added that he couldn’t speak for other members, but he believed officials should make such declarations and said he would support policy requiring it. He said he requested the exemption deliberately to avoid being suspected
of any wrongdoing.

“Once you’re a political member, everybody looks at you as corrupt somewhat,” he said. “So I decided, to avoid any sort of confusion, any talk, let me just be transparent with it and get it out. That’s why I did that.”

COI Counsel Bilal Rawat asked, “Given your approach to the need for transparency, if in 2021 Frontline Systems now decides again to bid for another contract from the other Festivals Committee … would you feel obliged to bring it back to the House and get an exemption?”

Mr. Smith responded, “Well, yes, again, because of transparency I would rather everything come out. In [that] case, I will bring it back to the House, of course.”