The House of Assembly on June 23 passed a motion approving the revised Recovery to Development Plan, which was tabled in the House last October, and establishing a supplementary borrowing …

END_OF_DOCUMENT_TOKEN_TO_BE_REPLACED 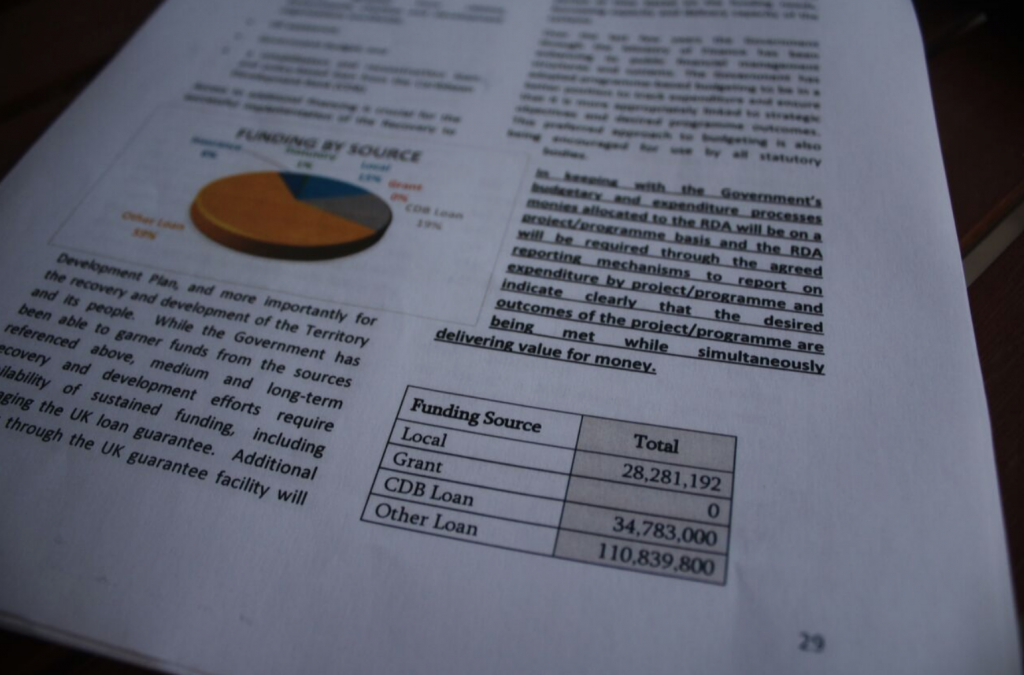 The revised Recovery to Development Plan, which was passed in the House of Assembly Tuesday, is significantly scaled-down from it’s original version. (File Photo: ZARRIN TASNIM AHMED)

The House of Assembly on June 23 passed a motion approving the revised Recovery to Development Plan, which was tabled in the House last October, and establishing a supplementary borrowing committee and a recovery steering committee.

During a debate before the vote, several House members spoke favourably of the new plan as a means for the Virgin Islands to take greater control over the recovery from the hurricanes of 2017.

The original RDP was 116 pages long and included projects estimated to cost $580.8 million over seven to ten years, but the downsized plan approved Tuesday is a 33-page four-year strategy that estimates financing needs at $186.9 million.

The original RDP passed the House in October 2018, and though then-opposition member Andrew Fahie voted for it at the time, he changed his stance after becoming premier in February 2019 and began to criticize it publicly.

Last September, the revised RDP was submitted to the United Kingdom as part of efforts to secure a £300 million recovery loan guarantee from the UK, negotiations which Mr. Fahie said on Tuesday are ongoing.

“We want to make sure that when we do sign off and take the loan, Mr. Speaker, it gives us the room to do the things that have needed … to allow us to strengthen our economy,” the premier added.

While introducing the motion to approve the downsized RDP, Mr. Fahie also said that he is renegotiating a $65 million loan from the Caribbean Development Bank, which has been used to fund several recent projects under the Recovery and Development Agency, to take into consideration the effects of the Covid-19 pandemic.

“That wasn’t factored in and nobody saw it coming,” Mr. Fahie said.

The ongoing renegotiations of the CDB loan are also aimed at ensuring that “as many local contractors as possible are getting those jobs,” he said. “When you take out a $65million loan from CDB … you cannot afford as a territory to have contractors come from all around the world and get those jobs,” Mr. Fahie said.

The Tuesday motion also calls for the establishment of a “borrowing committee” and a “recovery steering group,” which “is to help keep the work of the RDA and the government of the Virgin Islands focused,” Mr. Fahie said, though he did not specify whether anyone had already been appointed to these committees.

After Speaker of the House Julian Willock opened up the floor for debate on the motion, many of the members spoke resoundingly in favour of the new plan, seconding Mr. Fahie’s assertion that it would place the recovery more squarely in the hands of Virgin Islanders.

Opposition Leader Marlon Penn, for one, said he was encouraged that the new plan would ensure a “transfer of knowledge” amongst VI firms and contractors who will now have greater opportunities to collaborate.

Education, Culture, Youth Affairs, Fisheries and Agriculture Minister Dr. Natalio “Sowande” Wheatley, meanwhile, lauded the new plan as a means to rid the territory of the excessive restrictions that the UK has been able to place upon the VI as a result of the implementation of the RDA.

“Why is it so important to [the UK], Mr. Speaker?” Mr. Wheatley asked. “It is because they see it as a tool, Mr. Speaker, a tool to take the development and the autonomy out of the hands of the elected representatives. This is how I see it, Mr. Speaker.”