Following a recent string of violent crimes in the territory, the House of Assembly has passed legislation to widen the definition of “explosives” to allow more aggressive prosecution of gun-related …

END_OF_DOCUMENT_TOKEN_TO_BE_REPLACED

Following a recent string of violent crimes in the territory, the House of Assembly has passed legislation to widen the definition of “explosives” to allow more aggressive prosecution of gun-related crimes.

The House on May 13 passed the Explosives (Amendment) Act, 2021, which primarily redefines “explosives” to include materials that may be used in a firearm or as ammunition. Transportation, Works and Utilities Minister Kye Rymer introduced the bill on March 4 and brought it for a second reading on May 13. 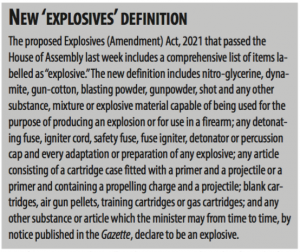 “Gun crimes have no place in our community, and we would work to try to get that out of this community,” he said.

Mr. Rymer said the aim of the amendment is to ensure that people convicted of gun offences “are prosecuted to the fullest extent of the law” rather than benefiting from a linguistic technicality.

He said the current “explosives” definition has already led to prosecution problems in court. He cited one example from 2020, when the Court of Appeal ruled that it was a mistake for the magistrate to have accepted a guilty plea for having explosives considering that ammunition is not currently defined as an explosive under the Firearm Ordinance Cap. 126.

During the debate on the new bill on May 13, Deputy Premier Dr. Natalio “Sowande” Wheatley said that as a member of the National Security Council, he lent his full support to the amendment. He said he believes a “robust” response to crime in the territory is necessary at this time.

Opposition member Julian Fraser said more legal reform is needed to address crime, and he believed the amendment should have full bipartisan support.

Deputy Speaker Neville Smith also lent his support but said the legislation could be harsher.

“You have to make it a serious deterrent,” Mr. Smith said.

Opposition Leader Marlon Penn said he wasn’t convinced that the current issues are driven by insufficient laws: He remembered when the previous administration passed stricter gun laws. But he said it may be time to have that conversation again.

Other members who spoke in support of the amendment were Health and Social Development Minister Carvin Malone, Junior Minister for Trade and Economic Development Shereen Flax-Charles, and opposition member Mitch Turnbull.

“We will not continue down this path of destruction,” Ms. Flax-Charles said while comparing what she described as a spate of crime in the past few years to the days when she felt comfortable leaving doors unlocked.

She urged reform not just in legislation, but also in supporting police services where needed, providing positive social activities for the territory’s youth, and building a more united community.