In recent months, Virgin Islands leaders have placed focus on the role of self-determination in the territory’s future development as they plan a review of the 2007 Constitution. The House …

END_OF_DOCUMENT_TOKEN_TO_BE_REPLACED 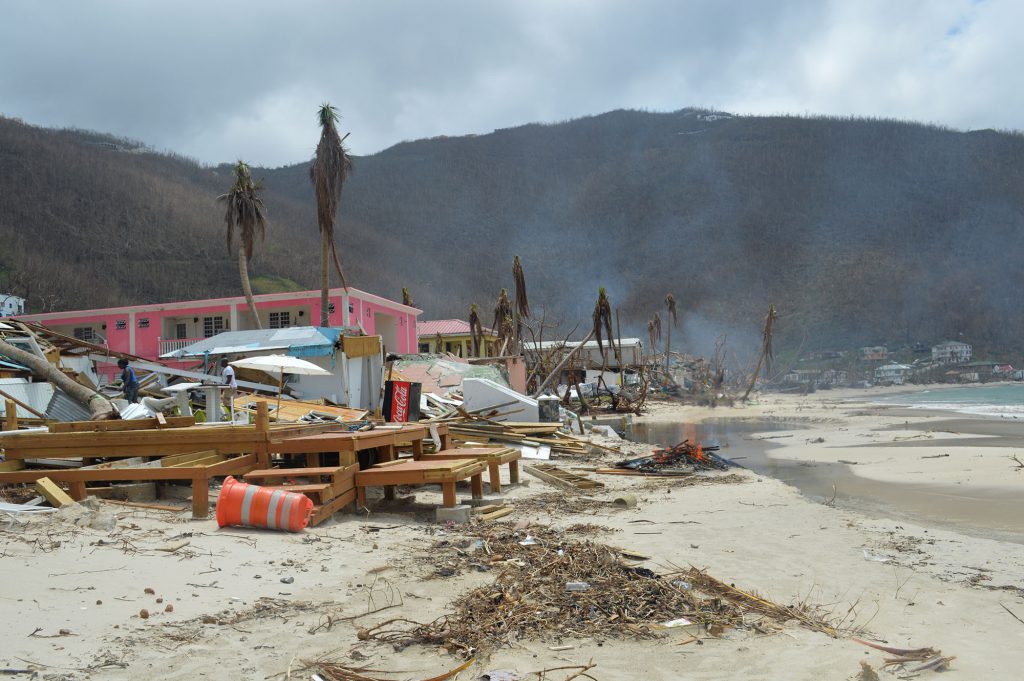 Proposed new legislation would help the territory respond to disasters like Hurricane Irma, which destroyed Cane Garden Bay (above) and most of the rest of the territory. (File photo: CONOR KING DEVITT)

In recent months, Virgin Islands leaders have placed focus on the role of self-determination in the territory’s future development as they plan a review of the 2007 Constitution. The House of Assembly explored more detailed implications of independence on issues such as disaster preparedness during this week’s sitting.

During its first session in 2021, the House debated plans for addressing catastrophes under the proposed Disaster Management Act, 2019.

Premier Andrew Fahie presented the revised version of the 114-page bill on Tuesday.

Back in June, the premier had moved for the act to go to a select committee of the whole House, allowing members to consider the bill in detail out of the public eye.

Delays in passing the bill stretch back at least to 2014.

The bill seeks to establish an updated, comprehensive mechanism for disaster management. This plan would include outlining ways to mitigate injury and damage caused by hazards; providing authorisation to erect temporary safety structures; and implementing a protocol for activating mutual aid agreements, among many other provisions.

“With each passing year, we are seeing the hurricane seasons becoming more active, with more violent storms,” Mr. Fahie said when presenting the bill.

He commended the work the Department of Disaster Management has done to prepare for extreme weather events and unprecedented disasters like the Covid-19 pandemic.

“I want to emphasise that whatever issues we may have with the structure of the proposed legislation, and whatever amendments we may consider in the committee stage, one of our underlying objectives must be and will be that the ability of our DDM team to do their jobs and to save lives will in no way be compromised,” Mr. Fahie said.

But he added that the House must consider certain constitutional and philosophical issues in the updated bill, some of which were raised during the 2007 constitutional review. He said the territory’s approach to disaster preparedness plays an important role in the overarching debate about self-determination in the VI’s relationship with the United Kingdom.

“The nuts and bolts of how disaster preparedness, mitigation and response are to be executed are technical details, but what I am referring to here are matters of national policy that frame context for how the disaster management legislation has to be approached,” Mr. Fahie said.

Opposition member Julian Fraser seconded the bill and highlighted some of the progress made on road projects in recent years. But he said more could have been done to improve public safety, something he said the legislature needs to consider carefully with the introduction of this bill.

He suggested establishing a new “Public Accounting Appropriations Committee” in the House that would help ensure government funds are being effectively used on important development projects.

Yesterday morning, the HOA went into closed-door committee to discuss the bill further. The premier said he expected all members of the House to offer substantive input.

The sitting will resume after the bill passes the committee stage.

The House also brought forward bills regarding trade and investments, as well as updated Covid-19 oversight.

The HOA approved the Virgin Islands Investment Act, 2020 for a first reading during the sitting last Thursday.

The premier said the legislation would “help with the diversification of our economy and also help our people in the Virgin Islands to even have a greater stake in the economy.”

The bill was not Gazetted before the Beacon’s deadline yesterday, and Mr. Fahie said he would explain its provisions at a second reading.

The premier also presented the Business Licensing Act, 2020 for a first reading last Thursday, with a similar focus on diversifying and strengthening the territory’s economy. He said the bill would pave the way for the VI Trade Commission and consumer protections to come into force. The HOA passed the Virgin Islands Trade Commission Act, 2020 last June to establish a commission that would oversee national and international trade.

The third and final bill to come for a first reading was the Covid-19 Control and Suppression (Miscellaneous Provisions) (Amendment) (No. 3) Order, 2020.

At the request of Health and Social Development Minister Carvin Malone, the HOA fast-tracked the bill through second and third readings and eventually passed it the same day.

The order extends various restrictions for preventing, controlling and suppressing the spread of Covid-19 until Jan. 15. Mr. Malone also laid on the table a statutory instrument Gazetted on Dec. 24 that raised fees for violating the pandemic regulations, and a new curfew order that extended the 2-5 a.m. curfew until Jan. 15 (see related story on page one).

During the HOA session, the minister described the importance of enacting such rules as the government works to balance safety and economic activity.

“Over $45 to $50 million have been redeployed from going into reconstruction, you can say, of institutions, roads and other necessary infrastructure to make sure that the food provisioning programme was funded,” Mr. Malone (R-at large) explained, adding, “If we intend to violate the provisions made to keep our people and our country safe, then there must be consequences.”

Opposition Leader Marlon Penn also raised concerns about the long-term effects of the pandemic and shutdown for residents.

Attorney General Dawn Smith explained that the amendment would expand the jurisdiction of the High Court to grant relief.

Deputy Premier Dr. Natalio “Sowande” Wheatley said, “I’m sure that the legal fraternity here in the Virgin Islands will be happy to know that this amendment has been made, and it will certainly strengthen our financial services sector.”

The bill allows a judge to make decisions about whether to grant relief for cases taking place outside the territory. Ms. Smith said this relief includes granting injunctions and other aid.

As background, she spoke about a commercial court case in March 2010 between Black Swan Investment ISA and both Harvest View Limited and Sablewood Real Estate Limited. Ms. Smith said the judge’s decision explained the importance of being able to grant aid when necessary considering the VI’s status as an important offshore financial centre.

“‘The business of companies registered within such jurisdictions is invariably transacted abroad, and disputes between parties who own them and others are often resolved abroad,’” she quoted from the decision, adding, “It seems to me that when a party to such a dispute is seeking a money judgement against someone with assets within this jurisdiction, it would be highly detrimental to its reputation if potential foreign judgement creditors were to be told that they could not [obtain one].”

Ms. Smith said a VI case earlier this year showed that the territory currently doesn’t have such jurisdiction abroad like the Cayman Islands and United Kingdom, prompting the creation of this bill.

“This small but important amendment envisaged by the current bill will ensure that this jurisdiction, as in other countries and competitive jurisdictions, is clearly set out in statute in the Virgin Islands,” she said.

After a brief closed-door committee debate, the House approved the bill with amendments last Thursday, marking the passage of the first bill put forward by the new attorney general.