Following reported complaints from retired legislators about an “anomaly” with how their retirement funds are tabulated, the House of Assembly is considering changing a law to address the issue. Premier …

END_OF_DOCUMENT_TOKEN_TO_BE_REPLACED 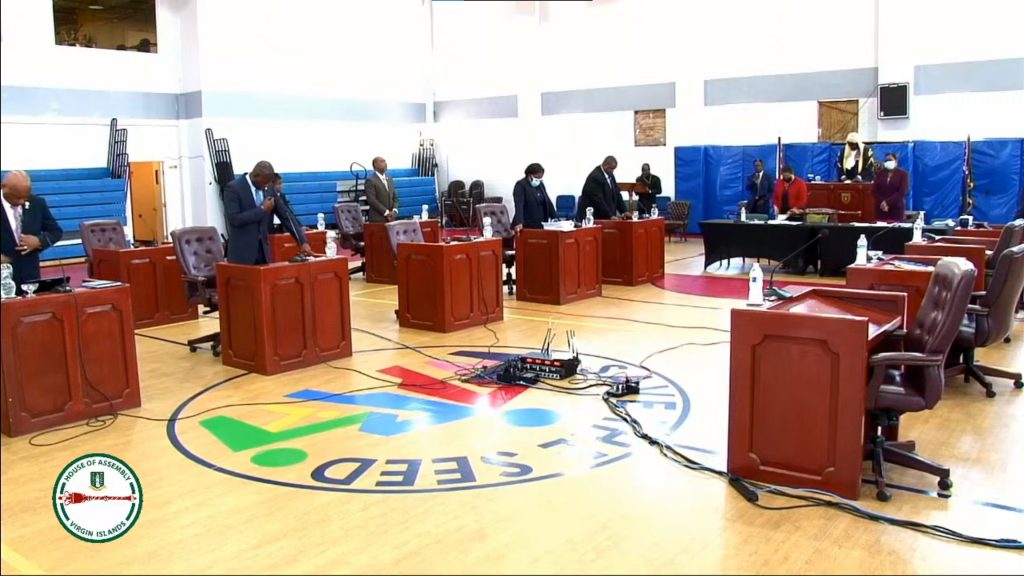 A review of public service employees is in the works at the same time that House of Assembly members are scrutinising elected officials’ retirement plans. (Screenshot: HOA YOUTUBE)

Following reported complaints from retired legislators about an “anomaly” with how their retirement funds are tabulated, the House of Assembly is considering changing a law to address the issue.

Premier Andrew Fahie brought the Retiring Allowances (Legislative Services) Amendment Act 2021 to the HOA for a first reading on April 29, and then amended the order paper for special permission to move the bill forward for second and third readings that day. The bill was not Gazetted by the Beacon’s print deadline May 5, but Mr. Fahie broadly summarised its objectives in the House.

“There were quite a number of anomalies in the way this act has been written, and this has been recognised a few years after this legislation has been passed,” he said. “Over the years, persons have shied away from correcting it, but it has created some tension over the correct calculation of what the retirement analysis should be for retired persons after they have retired from elected office.”

He denied that the bill was about seeking a salary increase for legislators, but said it would update certain policies. He did not go into further detail, and no members of the House debated the bill publicly before heading into closed-door committee.

They were still in committee when HOA recessed late on April 29. The House continued its sitting on May 6.

Mr. Fahie also changed the order paper to fast-track the Eastern Caribbean Supreme Court ( Judicial Officers’ Pensions) Act, 2021. He said the bill deals with issues for retiring judicial officers based on guidance from the Organisation of Eastern Caribbean States. He introduced the bill for a first reading on April 29, but the House didn’t get to debating it.

Early in the April 29 sitting, Mr. Fahie also said government would spend the next six months to a year reviewing the salaries of public officers. He clarified that this review pertained to public service employees but not elected officials.

“For a long time, I have been stating that we must pay persons their true worth, while reorganising the public service to meet the demands of the current services provided and that are in demand,” he said in a statement.

The Deputy Governor’s Office will pilot the exercise given the governor’s responsibility for the public service under the Constitution, he said.

In response to people who might question the timing of holding such a review amid the economic challenges posed by the Covid-19 pandemic, Mr. Fahie said the process is too long overdue to delay further.

“Too often the compensation of persons seems to be dictated by who you are, who you know and who you are affiliated with versus your skills, experience and requirements of the post,” he said. “We have to treat our people fairly and pay them their worth.”

The last major review was conducted by the Jamaican branch of KPMG in 2002, after the then-Executive Council officially gave its approval in July 2000, Mr. Fahie said.

The comprehensive job evaluation included police and teachers, among other public officers, he said.

All posts got an annual increment increase from 2.5 percent to three percent, he said.

However, Mr. Fahie said it’s time for an updated review.

“Some 17 years later, the workforce of the public service has experienced colossal shifts in industries, the complexity of work, internal systems, globalisation, technological evolution and the reform of legislative, financial and good governance frameworks, to name a few,” he said.

He also noted the increase in people retiring every fiscal year.

“The average rate of retirement is at 2.5 percent of the workforce, which averages to 67 employees annually,” Mr. Fahie claimed. “As this occurs, the workforce is comprised [of ] younger skilled professionals who are more likely to exit the organisation when the pay factor is not competitive.”

Pointing to an engagement survey conducted in 2018, Mr. Fahie said only 17 percent of respondents expressed satisfaction with their pay and benefits in the public service.

He added that officers were most upset when they felt their salaries didn’t reflect their performance.

“Although the overall response to the survey was only 28 percent of the public service, there is significance in the statistical data and how it impacts employee morale and engagement in the public service,” he said. “These elements are further compounded by the rise in the cost of living, especially following the 2017 natural disasters.”

He said the cost of doing the review and implementing the changes would ideally be offset by making human services more efficient. He added that the review would take into account abnormal work circumstances caused by the pandemic.

“The work of public officers will contribute to the Virgin Islands being a financially and economically sustainable territory that is resilient and competitive,” he said. “Therefore, it is of equal importance to consider the improvement of compensation in the public service to attract, retain and engage talented officers.”