Liquor, gambling and marijuana were some of the topics legislators debated over the past two weeks as they worked at an unusually fast past to consider 13 pieces of legislation …

END_OF_DOCUMENT_TOKEN_TO_BE_REPLACED 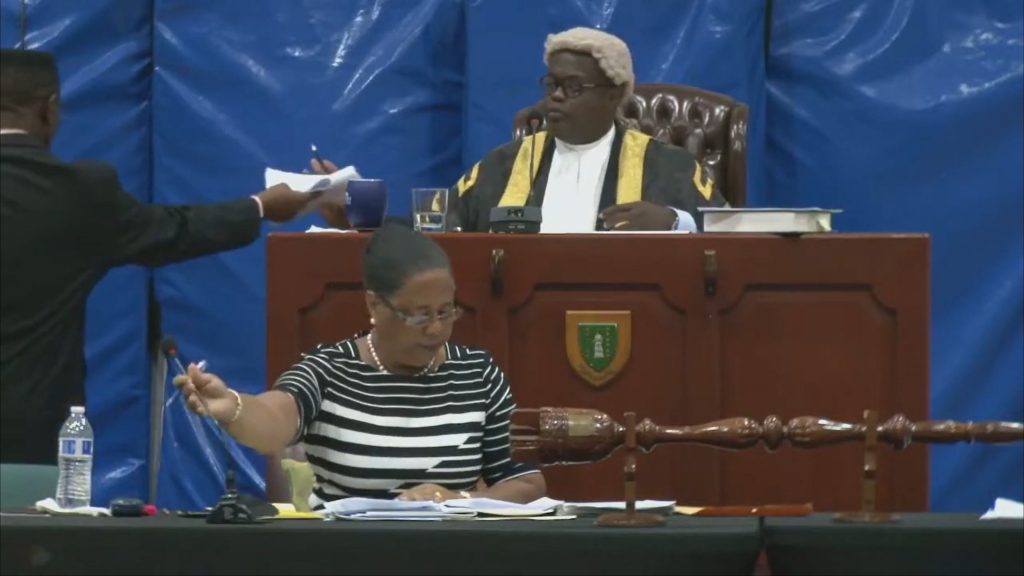 Speaker of the House Julian Willock reviews the vote on the Asset Seizure and Forfeiture Act, 2020 on June 23. It was the last of 13 bills the House of Assembly considered during concurrent sittings during the past two weeks. (Photo: PROVIDED)

Liquor, gambling and marijuana were some of the topics legislators debated over the past two weeks as they worked at an unusually fast past to consider 13 pieces of legislation and pass nine of them.

During overlapping ninth and 10th sittings of the House of Assembly, legislators approved laws designed to simplify home-buying; to legalise and regulate gambling; to formalise the territory’s relationship with the Virgin Islands Red Cross; to streamline arbitration; and to balance the government’s books all the way back to 2014, among others.

The House concluded the 10th sitting on June 22, then returned to the ninth on June 23. 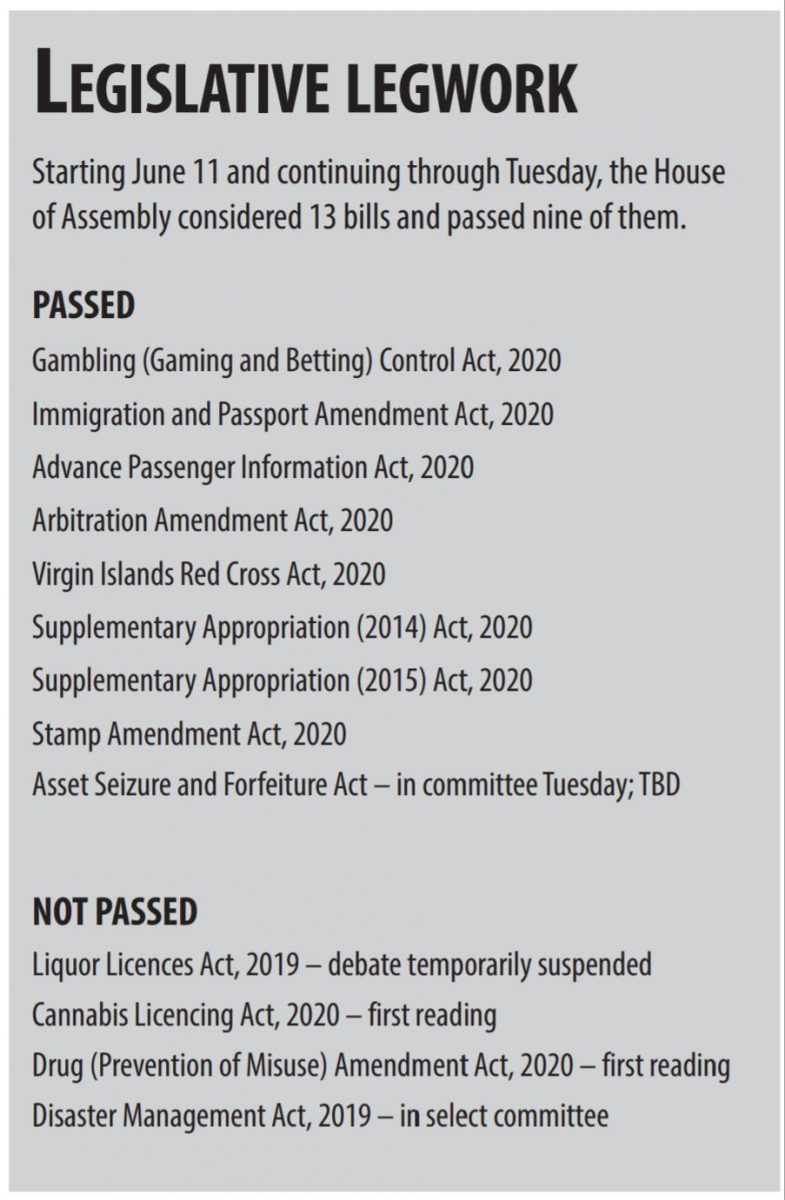 The acts explain how government shuffled funds for various projects, using budget surpluses from some projects for other underfunded efforts.

Typically, such appropriation acts are meant to come within six months of the end of the year, Mr. Fahie said.

One of the more controversial topics from 2015 was the funding of the East End/Long Look sewerage project. About $8 million originally allocated for the project ended up going to the development of the cruise pier project.

“We always stated that it was illegally transferred, and we were told that it was not,” said Mr. Fahie, who was in the opposition at the time of the transfer.

The premier recently announced that the Telecommunications Regulatory Commission had raised $2 million for the long-delayed project.

Mr. Fahie also said he plans to bring the 2019 supplementary appropriations act to the House of Assembly before the end of this year, in addition to bringing other delayed appropriations acts up to date in the next sitting.

He also anticipates bringing forward a full report from the Ministry of Finance about outstanding bills found so far.

“Plus, we will be putting more emphasis on the accounting in government best practices, … especially when it comes to securing goods and services and having to owe vendors, to make sure it is done correctly,” Mr. Fahie said. “We have met some practices that we have instructed to discontinue forthwith, because it’s not nice having persons not being paid because the procedures to hire them weren’t followed, but the person that was hired doesn’t know that. You can’t hold them hostage for when government didn’t do their part.”

Passing the appropriation acts will enable the territory to complete its annual audited financial statements, according to the premier, who explained that the absence of completed audits is a breach of the Constitution.

Both acts passed the House with amendments on Monday during the 10th sitting.

As part of government’s Covid-19 economic stimulus plan, the Stamp Amendment Act, 2020 was also introduced and passed in the House on Friday during the 10th sitting.

Mr. Fahie said the act aims to make buying a house in the territory easier for first-time owners who are belongers.

“One of the things that happens in any part of the world when you have financial challenges is that some persons end up being forced, because they’re in a position where they can do no better, they have to sell property,” Mr. Fahie said after acknowledging that many VI residents are experiencing financial hardship amid the Covid-19 pandemic.

The legislation, he said, encourages people giving up land to sell to belongers. For a limited time, it waives certain fees associated with buying a home.

The stamp duty of four percent that belongers typically have to pay is suspended until May 31, 2021. Non-belongers have to pay 12 percent.

“He who owns the lands owns your country,” the premier said.

“There are many other areas that can be added in to sweeten the pot for our people,” he said.

The bill — which was rushed through the House in a day — did not appear to be Gazetted before it passed.

As the territory progresses into hurricane season, legislators are again picking up the Disaster Management Act, 2019.

On Monday during the 10th HOA sitting, Mr. Fahie moved for the act to go to a select committee of the whole House, allowing members time to consider the bill later and move on with the day’s business.

The decision was the latest in a string of delays stretching back to at least 2014.

The 114-page bill seeks to establish an updated, comprehensive mechanism for disaster management.

This plan would include outlining ways to mitigate injury and damage caused by hazards; providing authorisation to erect temporary safety structures; and implementing a protocol for activating mutual aid agreements, among many other provisions.

HOA members also passed the Virgin Islands Red Cross Act, 2020, which establishes the humanitarian organisation as a belonger corporate body with autonomous status. With this status, the BVI Red Cross can hold property in the territory.

“BVI Red Cross has become a fixture in the Virgin Islands,” Mr. Malone said on Monday during the 10th sitting. “We could not underestimate the work they have done in the aftermath of the hurricanes of 2017, and the work they continue to do year to year on health screenings and other initiatives.”

He commended the society for providing skilled and impartial care to those in need in the territory, as well as financial and other assistance to sister organisations in the region.

The act passed with minor amendments.

This week the HOA also passed the Arbitration Amendment Act, 2020, which differentiates between costs awarded through an arbitration tribunal and the costs of civil proceedings in the High Court in order to clear up any grey areas, as Mr. Fahie put it.

Members passed it on Monday without debate or amendments.

As the last of 13 bills, the Asset Seizure and Forfeiture Act, 2020 passed the House with amendments late Tuesday evening. The proposed law details what happens to certain property seized while investigating criminal offences.

The House plans to begin its 11th sitting on June 26 with promises of additional supplementary appropriations acts.