The House of Assembly did not decide outright last week whether or not to excuse Speaker Julian Willock from personally paying more than $120,000 in legal fees he incurred while …

END_OF_DOCUMENT_TOKEN_TO_BE_REPLACED 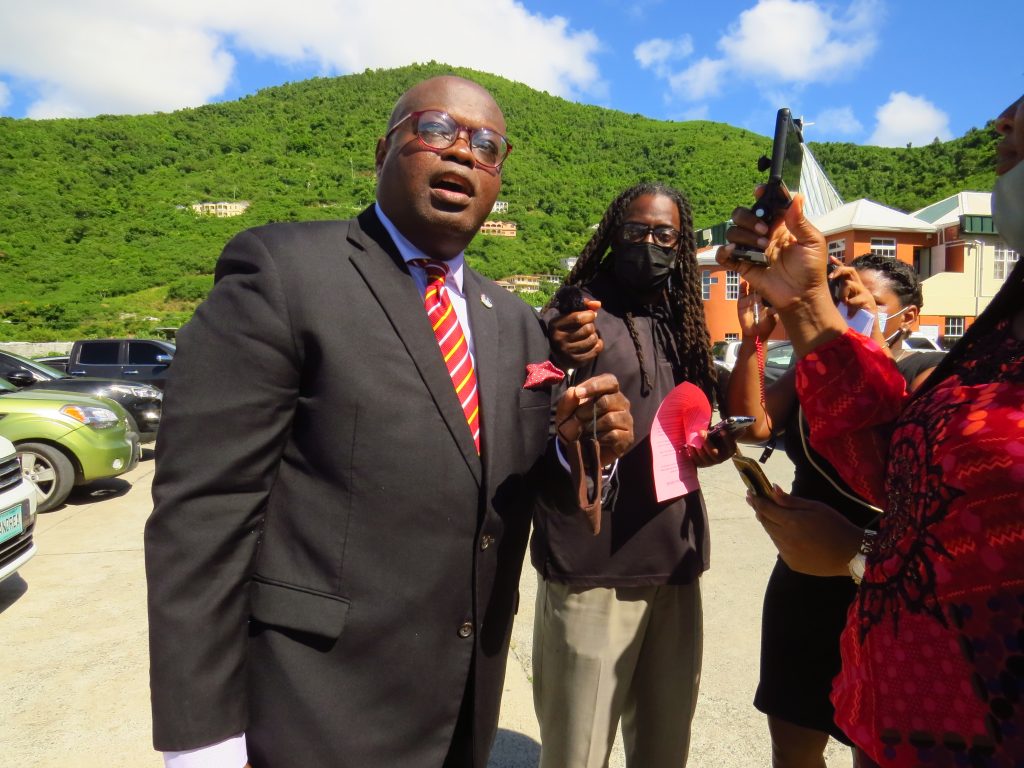 Pausing to speak to reporters in front of the House of Assembly amid protests about his $120,000 in legal fees on Nov. 1, Speaker Julian Willock says he believes the public will find he acted in the territory’s best interests in bringing his action. (File photo: DANA KAMPA)

The House of Assembly did not decide outright last week whether or not to excuse Speaker Julian Willock from personally paying more than $120,000 in legal fees he incurred while unsuccessfully seeking an injunction to block three lawyers from participating in the Commission of Inquiry.

Instead, the House turned the matter over to a special committee. 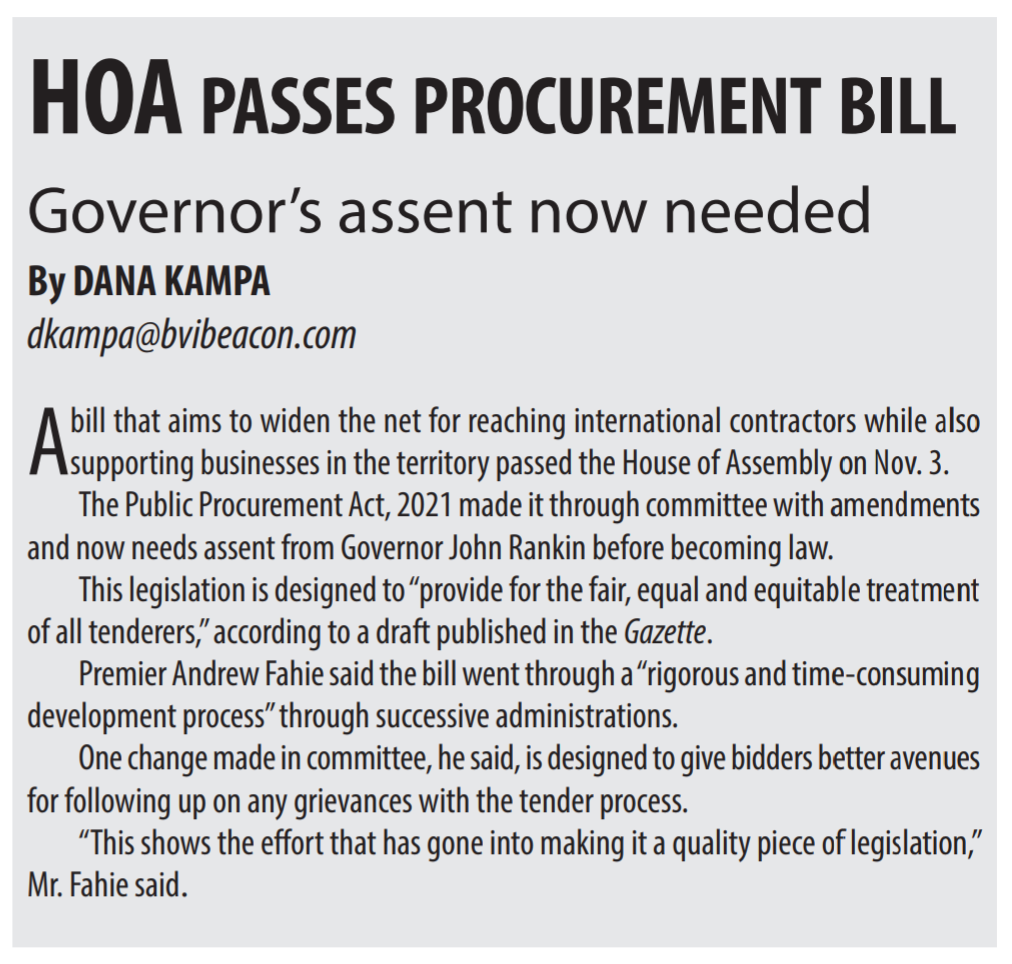 The vote came on Nov. 4 after Premier Andrew Fahie revised a previous motion for the House to exempt Mr. Willock from paying the fees, which sparked controversy early last week.

On Nov. 3, he sought support for his amended motion to seek a recommendation from this committee, which passed with five votes in favour, two against, and five absences.

The original motion said the House “considers it just and proper that the honourable speaker should not be personally responsible for payment of the costs of an action that he instituted on behalf of this honourable House.”

It continued that “all legal costs ordered to be paid by the court as a result of the aforementioned action commenced by the honourable speaker and the legal fees incidental to the aforementioned legal proceedings be a charge on the Consolidated Fund.”

However, the amended motion put the onus on the special committee to recommend within two months whether or not the government should cover Mr. Willock’s costs. It will be chaired by opposition member Mark Vanterpool (R-D4) and include opposition member Julian Fraser (R-D3) and Natural Resources, Labour and Immigration Minister Vincent Wheatley (R-D9).

“Following consultation with members of the government’s caucus, it was revealed that discussions were held with select honourable members,” Mr. Fahie read from the amended motion. “It was implied that approval was given to the speaker to file for an injunction against the persons who were alleged to be practising law in the territory in breach of the laws of this jurisdiction. However, indeed there were no expressed permissions granted by the House of Assembly.”

Accordingly, he read, the House has three possibilities to consider: that although the speaker didn’t have express permission to pursue legal action on behalf of the House, he was acting in good faith to carry out his duty and should not be personally held liable; that although he was acting in good faith, the House can’t consider or approve the payment of costs; or that Mr. Willock’s actions were unwarranted and without merit, and the House would not approve the costs.

On the Nov. 22 holiday celebrating the 72th anniversary of the demonstration led by Theodolph Faulkner, protestors including Cindy Rosan plan to march from the Governor’s House to the House of Assembly to demand that Mr. Willock pay the legal fees. Organisers also called for the speaker’s resignation and have launched an online petition to that effect. Additionally, they encouraged community members throughout the territory to hold a “sick out” from work on Nov. 11 and 12.

The fees were incurred when Mr. Willock sought an injunction against three Commission of Inquiry lawyers based on his claim that they were breaching the Legal Profession Act 2015 by acting as legal practitioners in the territory without being called to the bar.

He later withdrew the request, but Commercial Court Justice Adrian Jack ruled on Sept. 28 that he must personally pay the fees he incurred, though the speaker’s attorneys argued that his actions were covered by a contract with VI firm Silk Legal to represent HOA members in the inquiry.

The premier’s new motion claimed that “the said attorneys have since belatedly applied to the High Court to be admitted to practise as solicitors in this territory, which applications remain pending, and by making such applications, it substantiates the fact that those persons may have been practising the law in the Virgin Islands contrary to the requirements of the laws of the territory at the time the honourable speaker filed the matter in the courts.”

After reading the motion, Mr. Fahie acknowledged the difficulties experienced in a post-pandemic, post-Hurricane Irma VI.

“Your government fully recognises that these are indeed challenging times for our people of the Virgin Islands,” he said. “In most cases, these are the results of years of concerns about the management of the public purse.”

Tough times, he said, call for tough decisions that won’t always be popular. He added that he respects community members’ right to disagree and voice their concerns “without any fear of retribution.”

“We recognise that there are persons who are very emotional about this motion, and rightfully so,” Mr. Fahie continued. “It is clear that how we spend taxpayers’ money at any time, but especially going through the worst pandemic in the last 100 years, would come under more scrutiny, and rightfully so.”

While sending the matter to committee may seem like kicking the can down the road, he said, it is a necessary step in properly investigating the speaker’s actions.

He noted a “deep division” in both the House and the wider community on the motion, and he encouraged people to allow due process to take place.

When the floor was opened to debate that lasted two days, opposition members claimed that covering the speaker’s fees despite the court’s decision would be a violation of legislative powers.

“I do not support the honourable House of Assembly making a decision that usurps and circumvents the courts, which is the judiciary, to make a payment for the Honourable Speaker Julian Willock,” said Opposition Leader Marlon Penn, who also disagreed with sending the issue to a select committee.

He took issue with the fact that Mr. Willock pursued the injunction request without consent from the House or the attorney general and then took separate action against the AG, again without the House’s explicit consent.

He said the contract terms for Silk Legal to provide services to House members during the COI clearly instruct that if any matter reaches the court of law, the firm would assist the attorney general in representing members. Mr. Penn said this does not give the firm leeway to take up a case on its own.

The speaker had opportunities to prove his actions were in the public interest, Mr. Penn said. But the judge didn’t find sufficient proof.

“The evidence and the due process that this went through in the courts is clear,” he said. “The tactics and the delays, the constant delays, the smoke screens about a select committee, and the fact that we’re going to use one member from every political party in the House is just that — tactics.”

In an unusual move, one member of government — Junior Minister for Trade and Economic Development Shereen Flax-Charles — also opposed paying the speaker’s fees.

“The people did share with me — and their voices were clear — they do not feel that their interests were served by this injunction, especially in a time such as this,” she said, noting that her phone had been ringing constantly in the days after the protest. “They are concerned with what may appear to be a personal vendetta being fuelled by the taxpayer. Unless there is information in some hidden domain, we must move based on what we know and what the people desire.”

Although she serves on the government side of the House, she said, she supported the voice of the people.

Other members of government, however, spoke in support of the premier’s motion.

On Nov. 4, Mr. Penn moved a separate motion to deny paying the fees, but it failed with three yes votes, five no votes and four absences.