The House of Assembly passed seven bills on April 22, most of which updated existing legislation focused on financial matters including fee waivers, trusteeships and inheritance rules. While presenting the …

END_OF_DOCUMENT_TOKEN_TO_BE_REPLACED 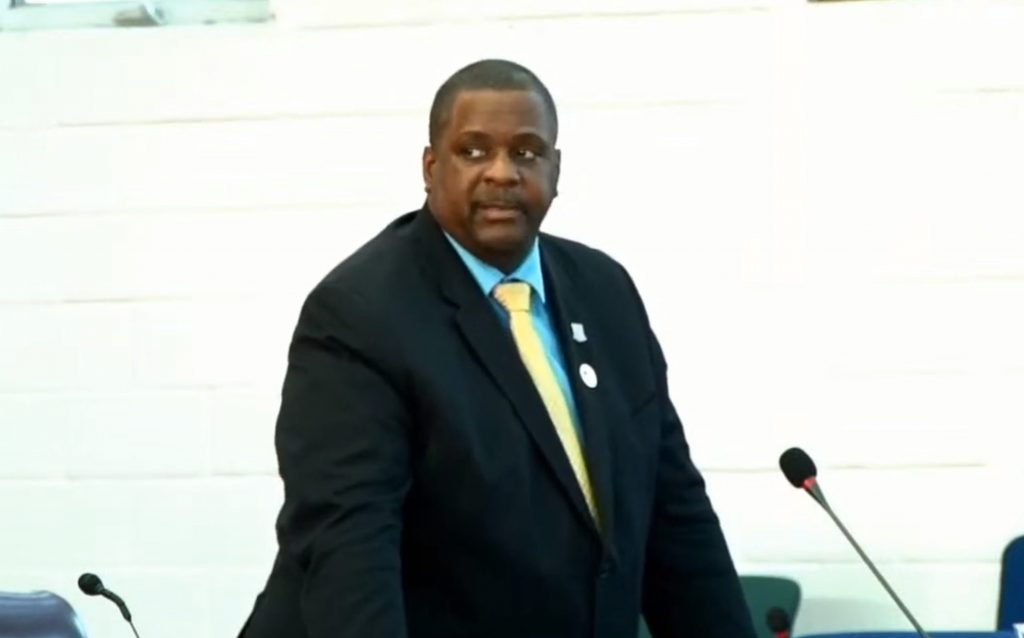 Premier Andrew Fahie brought seven bills for second readings in the House of Assembly on April 22. All of them passed and now await the governor’s assent. (Screenshot: HOA YOUTUBE)

The House of Assembly passed seven bills on April 22, most of which updated existing legislation focused on financial matters including fee waivers, trusteeships and inheritance rules.

While presenting the bills for second and third readings, Premier Andrew Fahie also shared updates about participation in the stamp duty waiver programme and outlined other efforts to bring financial legislation up to date.

By passing the Stamps (Amendment) Act, 2021 on April 22, legislators voted to again extend the timeline for waiving stamp duties for belongers purchasing property.

When bringing the bill for a second reading, the premier said more than 600 belongers have taken advantage of the waiver since it was announced as a Covid-19 economic stimulus measure last May.

This year, Mr. Fahie said, government consulted constituents in all districts beginning in January, and at those meetings several young people approached representatives requesting the extension.

The bill extends the waiver until Dec. 31. However, this extension is likely to be the last, the premier indicated.

“We have seen from the numbers from Inland Revenue that quite a bit of our people, what we would call the common man, have taken advantage of this and have benefited from this,” Mr. Fahie said.

The premier said the exemption can make a big difference for would-be homeowners.

“When we did it first, there was a concern that only the rich would benefit from it, but it has been shown that all persons across the diaspora of this territory … have truly benefited from this initiative and continue to benefit from it,” Mr. Fahie said.

Government has yet to publicise comprehensive data about how many people have utilised the programme and from what income brackets. But Mr. Fahie said that between the launch of the programme and Feb. 26, 2021 it benefited 628 people, who avoided $2,310,518 in fees.

After making amendments in closed-door committee, the House passed the bill, which now awaits the governor’s assent.

The original legislation was enacted in 1944 to create a simple procedure for dealing with small estates in the wake of a resident’s death.

“The value of small estates, as outlined in the act, is clearly outdated and has over the years caused problems relative to local probate practice in the territory,” the bill text reads. “Furthermore, a problem frequently encountered is the inability of heirs of a deceased person to access monies in bank accounts.”

Under the current law, the cost for heirs to obtain their inheritance from small-value properties is often higher than the value of the property itself, according to the bill.

“This has often led to family land disputes or the land in question being abandoned as no heir considers it worth the time or effort to regularise,” the bill notes.

Another small amendment specifies that this act deals with VI domiciles. Mr. Fahie, who introduced the bill at a previous sitting, said this addition is designed to prevent abuse of the system internationally.

“These minor but important reforms will facilitate both the administration of small estates and reduce family disputes,” the bill notes.

Deputy Premier Dr. Natalio “Sowande” Wheatley, who seconded the bill, added that it would make “life easier and simpler for persons who’ve had a family member pass away” in dealing with the probate process and letters of administration.

“This is a victory for the common man,” he said, concluding that this and other bills passed during the session aim to update archaic laws and make legal processes work for everyone in contemporary times.

The bill passed without amendments and awaits assent from the governor.

The HOA also passed the Property (Miscellaneous Provisions) (Amendment) Act, 2021, which deals with the validity of a trust established for an unborn child whose parents aren’t married. The United Kingdom passed the related Family Law Reform Act in 1969, but according to the amendment text, it is unclear if that law extended to the VI.

“If the rules exist, then it means that any provision in a trust deed that expressly provides for an illegitimate child yet unborn will have no legal force,” according to the bill.

The bill text notes that the VI’s Status of Children Act, 2014 gave equal footing to “legitimate” children and those born out of wedlock.

“In view of this and of the fact that the freedom to dispose of personal property is a feature of Virgin Islands law, the bill provides in clause two for the removal of any rule of law or policy that denies a person the freedom of creating a deed to provide for his or her unborn ‘illegitimate’ child,” the bill states.

The bill passed without amendments and awaits assent from the governor.

When bringing the Trustee (Amendment) Act, 2021 for a second reading, Mr. Fahie said it is geared toward helping the VI become more competitive in the financial world.

The amendment empowers the High Court to vary trusts without the consent of adult beneficiaries.

Other amended areas include how trustees deal with “incorrect professional advice” and reserved power trusts.

“We know that we are in the business of financial services, and we must always be on top of our game to ensure that our legislation is on the cutting edge and providing value to our clients,” Dr. Wheatley added after seconding the bill.

He thanked the VI branch of the Society of Trust and Estate Practitioners for its assistance reviewing the legislation.

The bill also passed without amendments and awaits the governor’s assent.

The House also passed without amendments the short Virgin Islands Special Trusts (Amendment) Act, 2021 to conform with this new power of the High Court to vary trusts.

The House then tackled the Financial Services Commission (Amendment) Act, 2021, offering flexibility to companies that may owe hefty fines to the FSC through no fault of their own.

The bill would empower companies that miss filing dates because a registered agent didn’t give proper notice to ask the FSC for a penalty waiver. It also outlines disciplinary measures for defaulting agents.

The bill passed without amendments and awaits the governor’s assent.

On April 22, legislators also expedited a bill to update merchant shipping regulations (see page eight), and they passed a resolution appointing Lorie Freeman as deputy director of the Social Security Board.