Django the dog had two items on his list to Santa Claus this year, according to his owner Claudia Delahoy: for Covid-19 to be gone so he can visit all …

END_OF_DOCUMENT_TOKEN_TO_BE_REPLACED 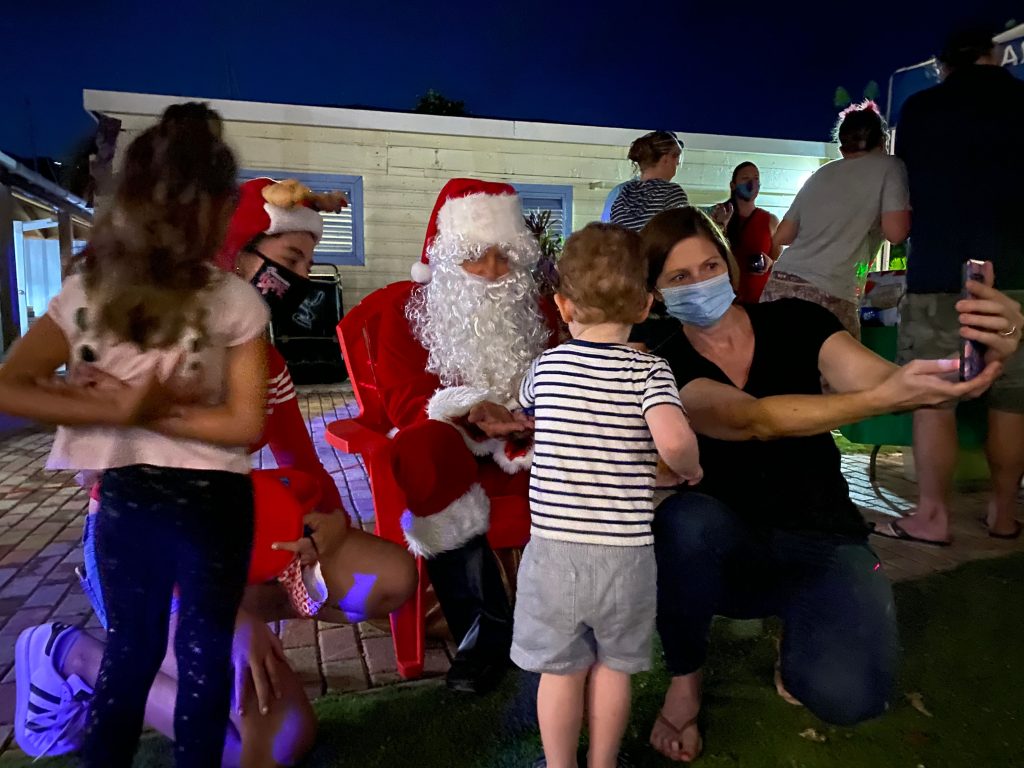 Santa Claus made a visit to Nanny Cay on Friday to meet children and puppies at a fundraiser for the Humane Society of the BVI. Young visitors delivered their letters to Mr. Claus, and adults sampled mulled wine and mince pie. (Photo: DANA KAMPA)

Django the dog had two items on his list to Santa Claus this year, according to his owner Claudia Delahoy: for Covid-19 to be gone so he can visit all his friends again, and for marrow bones to be back in stock at the grocery store.

He was one of the dozens of dogs and children to enjoy a visit from Mr. Claus during a fundraiser for the Humane Society of the BVI on Friday at Nanny Cay.

The festive event offered mince pies, mulled wine, raffle prizes, other treats and a chance to share a wish list with Kris Kringle.

The society said it raised $2,261 at the third annual event, which will support operational costs that amount to about $8,000 a month.

Last year, the focus was on raising money for relocating from the current Johnsons Ghut shelter, but this year it was geared toward meeting the increased demands of the pandemic.

Because the borders were closed to tourists from March to December, the organisation has been operating near capacity for an extended period of time.

Typically, pets that are more likely to be adopted abroad are escorted by visitors returning to the United States, where a network of shelters helps them find homes. The border restrictions meant that the only relief was from a series of “freedom flights.”

In October, PAW BVI helped coordinate a flight for hundreds of dogs and cats from the Caribbean to the US, 76 of them coming from the Beef Island airport.

The cargo plane stopped off in the USVI to pick up more pets from St. Thomas, St. John and Vieques before finally landing in Florida. Another flight in late November carried 36 cats and 35 dogs.

Crowdfunding efforts spearheaded by the Animal Care Center of St. John — where shelters are similarly burdened right now — have raised nearly $100,000 to facilitate the flights. Updates are available at www.gofundme.com/f/caribbean-pet-rescue.

PAW BVI said it has helped transport almost 1,000 animals since the flight programme started in 2017.

Though the large flights have offered some relief, animal shelter manager Vijay Bissoondutt said the community support is still needed.

Els Kraaken, a humane society board member, said she was glad to still be able to hold the Christmas celebration and bring a little holiday cheer to kids even with the Covid-19 restrictions. Other events are planned as well, she said, including a socially distanced gaming night and a beach party.

“If we’re not doing these kind of big events, we definitely will do smaller events,” Ms. Kraaken said.

Face masks hand made by Denise Carson and other wares can be purchased at the shelter, with the proceeds going to support operations.