When the Covid-19 pandemic hit and effectively shut down the tourism industry, many unemployed expatriates were compelled to leave the Virgin Islands. But because of restrictions on the limited number …

END_OF_DOCUMENT_TOKEN_TO_BE_REPLACED 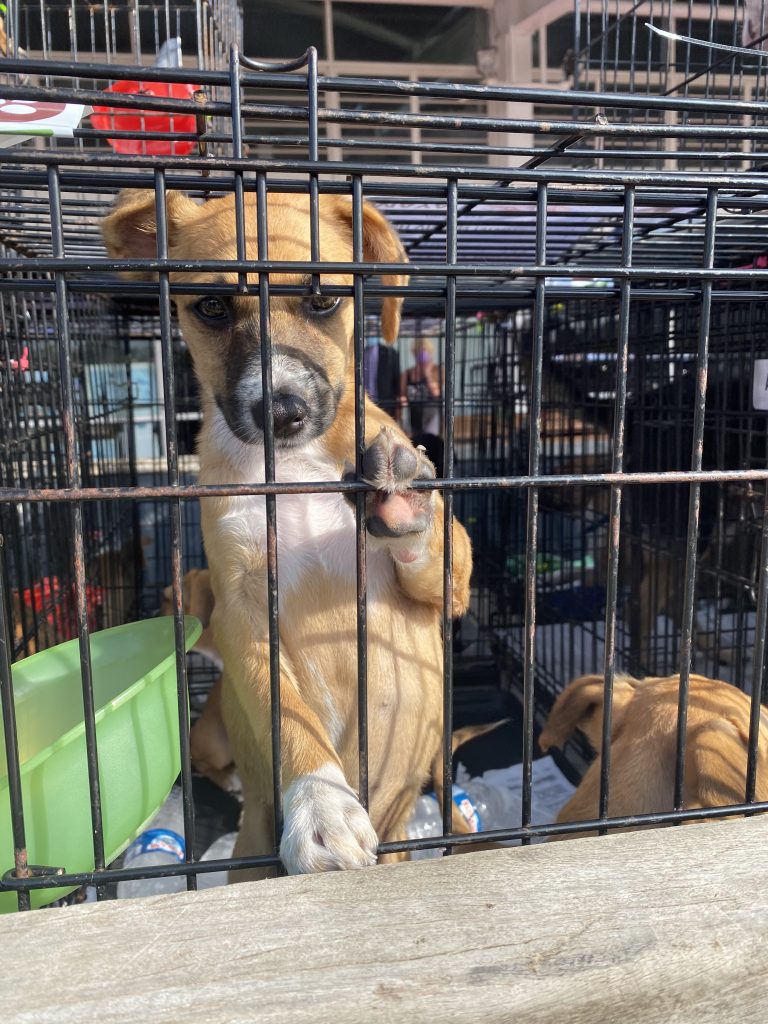 A massive network of volunteers collaborated last week to send hundreds of dogs and cats to the United States in hopes that they could find homes. Some of the animals were destined to be reunited with families they’ve missed since the onset of the Covid-19 pandemic; some went to partner shelters, where they’ll have a wider audience of potential adoptive families; and some were traveling from fosterers in the Virgin Islands to new homes abroad. (Photo: DANA KAMPA)

When the Covid-19 pandemic hit and effectively shut down the tourism industry, many unemployed expatriates were compelled to leave the Virgin Islands. But because of restrictions on the limited number of flights leaving the territory, some of their pets got left behind.

Now, through the collaboration of more than a dozen animal rescue organisations, dogs and cats from the Caribbean are being reunited with their families, and others are well on their way to being adopted.

Early Friday morning at the Terrance B. Lettsome International Airport, foster families and volunteers bid farewell to dozens of dogs and cats travelling to new homes in the mainland United States.

Fosterers reached through the bars of the travel crates to say one last goodbye while several litters of puppies entertained themselves tearing up the newspaper in the crates, waiting to board.

A total of 76 animals flew out from the Beef Island airport. The cargo plane stopped off in the USVI to pick up 115 more pets from St. Thomas, St. John and Vieques before finally landing in Florida that evening.

From there, a fleet of vans drove the animals to partner animal shelters or their new homes. The Florida-based Big Dog Ranch Rescue, the largest no-kill dog rescue centre in the US, facilitated three such flights within 30 days, transporting 191 dogs and cats from the Caribbean.

Some of the animals were destined to be reunited with families they’ve missed since the onset of the Covid-19 pandemic; some went to partner shelters in the US mainland, where they’ll have a wider audience of potential adoptive families; and some were traveling from foster families in the VI to new homes abroad. PAW BVI said of the pets flying out, 30 cats and 38 dogs went to partner shelters, five dogs and one cat had adopters waiting in the states, and two senior dogs were reunited with their owners.

The border restrictions resulting from the Covid-19 pandemic presented an unexpected challenge for animal rescue operations in the Caribbean.

PAW BVI’s flight programme, which normally sends pets to the continental US throughout the year, relies heavily on tourists willing to escort dogs and cats to the partner rescue centres.

Without tourists, the nonprofit organisation had no way of transporting pets.

“Normally we would be sending out a few animals almost every day with people who are on the commercial flights,” PAW BVI volunteer Amy Edmonds said. “With no one flying out, it’s meant that the animals are just kind of stuck here. Although the charities over in the US have still got high demand for fostering and for adopting, they just haven’t got any way of getting them off the island.”

So “freedom flights” of cargo planes filled with US-bound pets were arranged, with the previous two taking place in July and late August.

Organising the flights was tricky, as Canine Cats & Critters BVI vetted all the animals despite working on reduced hours due to the territory-wide curfew. Organisers also had to find an airline willing to do a mass transport of dogs and cats, load dozens of crates the morning of the flight, and coordinate with the many organisations that would be looking after the pets once they landed.

The Humane Society of the BVI announced on Sept. 16 that Kimbo, the last of the 10 shelter dogs that flew in July from the VI to HALO No-Kill Rescue Shelter, based in St. Sebastian, Florida, had been adopted. The other adoptees were Bob, Blossom, Josie, Buckie, Biscuit, Missy, Sting, Chester and Jack.

“It is sad we have to fly dogs to find homes, but the numbers on island are too high, especially with adult dogs, and we have to give every fur baby a chance,” the Humane Society stated in a Facebook post announcing touchdown.

Though the flights have helped dozens of animals, the shelter said intake numbers remain high. After seven dogs arrived in a day, the number of pets in its care rose to 73 this week.